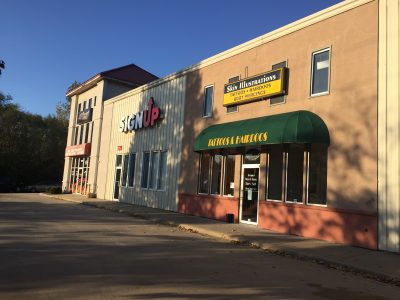 Hour Glasses plans to open in the Skin Illustrations building at 725 N. Second St. in December. The one-hour eyeglass store will be on the ground floor, while the tattoo shop has relocated to the second floor of the building.

I love it when I have to go without my eyeglasses for a few days. I end up having the most interesting of cocktail party conversations — usually with the coat rack in the corner. Wait times for eyeglasses, though, may be going down as a Lawrence businessman has struck a deal to open a one-hour eyeglass center.

Lawrence businessman Paul Benner plans to open Hour Glasses at a location along North Second Street in December. The business will have all the equipment necessary to cut and grind eyeglass lenses, with most of the work being done in an hour or less.

Benner said he had heard enough stories from friends to determine that Lawrence had a need for a quick-service eyeglass lab.

“Honestly, it was hearing about my buddy who needed glasses immediately,” Benner said of his decision to open the business. “It was $60 to $250 for an eye exam and wait two weeks to get your glasses. That doesn’t do you a lot of good if you have lost your glasses.”

Hour Glasses will be located in the large, multitenant commercial building at 725 N. Second St. in North Lawrence. If you are unfamiliar with the building, it is the one that has everything from Kansas City Sailing to Combs Custom Cycles to Lynn Electric. The building also houses the tattoo shop Skin Illustrations. Hour Glasses actually will be going into that business’s space. The tattoo shop has moved to a second-story space in the same building.

Benner said Hour Glasses would have a full set of equipment that would allow the business to cut and grind lenses of all sorts on site. That includes bifocals and other specialty cuts. He said that should help the business stand out from some of the other one-hour eyeglass locations in the Topeka and Kansas City area.

“What happens in this game at other places is they get you in the door with the one-hour thing, and the whole game is an up-sell,” Benner said. “If you want anything other than the basics, that work is automatically sent off site. That won’t happen here.”

In addition to the grinding and cutting equipment, the business will have a large showroom of eyeglass frames.

“Our biggest concern right now is having too many choices and getting people confused,” Benner said. “We have a really large space.”

Benner said once the business gets operational — he’s hoping for Dec. 1 — he will start working on attracting an optometrist to fill part of the space. He thinks a variety of eye doctors will want to be located next to a one-hour eyeglass store. It will create an easy one-stop shop for people who need to get an eye exam and new glasses.

He’s also hoping consumers find it to be an affordable option. He said he was still working on the pricing plan for the business’ services, but he hopes to come in a bit below market rates. That is one of the reasons he decided to locate the business in North Lawrence rather than in a more prominent commercial corridor, like west or south Lawrence. He said the North Lawrence location was still easy to get to but would allow the business to save on rent, which should make it easier to hold prices down.

The venture will be Benner’s first foray into the eyeglass business. A retired Army officer, Benner came to Lawrence as a craftsman, working on a crew that built organs at Reuter Organ Company. Benner currently owns a liquor store in the shopping center at Sixth and Lawrence Avenue across from the Dillons grocery store. He said that business may continue. He’s evaluating his options as the lease comes up for renewal, but he said the eyeglass business would be his primary focus.

“I’m excited about it because I’ve gotten so much positive feedback,” he said. “There are a lot of problems created when you don’t have your glasses.”