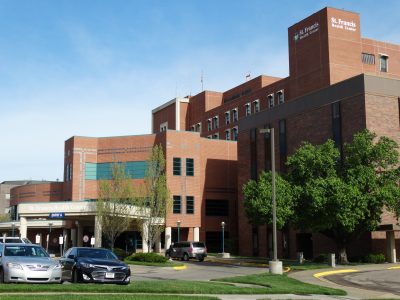 St. Francis Health Center in Topeka is pictured in this file photo from April 2017.

Whether it be neurosurgery in Topeka or knee surgery in Emporia, LMH Health doctors may soon be a bigger part of it.

Lawrence neurosurgeons next month will be allowed to start doing some surgeries at Topeka’s St. Francis hospital, while a pending deal would allow doctors with LMH-owned OrthoKansas to provide services beginning in January at Emporia’s Newman Regional Health hospital.

Members of the LMH Board of Trustees were briefed on the deals at their Wednesday meeting, which also included an update on the finances of the hospital, which is on pace to post an annual operating loss for the first time in more than a decade.

“We are recognizing that we can’t be the same organization year over year and just do the same things,” Russ Johnson, president and CEO of the hospital, told the board as he was addressing financial results of the nonprofit hospital.

LMH board members were enthusiastic about the new partnerships. The Topeka deal may directly impact some Lawrence patients. Currently there are some complex neurosurgery procedures — certain types of spine surgeries, mainly — that LMH can not perform since the hospital does not have an open-heart surgery program. Certain surgeries require that a team of heart surgeons be available in case complications arise. The St. Francis hospital, though, has an open-heart program. That will allow Lawrence patients to stay with their Lawrence doctor — although the surgery will be done in Topeka — where in the past they were likely to be transferred to an out-of-town physician.

The St. Francis deal is also notable because it is another partnership that involves the University of Kansas Health System. The KU entity has a minority ownership stake in the St. Francis hospital. This is the second deal this year that LMH has made involving the KU health system. The first was a joint operating agreement that allows the two health companies to provide care to KU student-athletes.

LMH officials, though, said the St. Francis deal isn’t necessarily a sign that the KU health system is its preferred partner for future deals. LMH leaders noted that in crafting the deal they primarily dealt with Ardent Health, which is the majority owner of the hospital.

“In a market like Topeka, if you are working with one, you are competing with the other,” Johnson told the board. “How long can we navigate that before someone decides, ‘Hey, you are the enemy’ or ‘You are my friend’?”

The Emporia deal is more straightforward. Ever since LMH bought the Lawrence-based OrthoKansas practice in 2017, it has sought to make it a bigger player in the orthopedic market, which includes knees, hips, shoulders and other types of joint and bone procedures. The Emporia hospital, which is much smaller than Lawrence’s, was having trouble recruiting an orthopedic doctor to meet its needs. The partnership will allow OrthoKansas’ doctors to fill those needs. Initially, Lawrence-based doctors will be doing some of the work in Emporia, but plans call for the hiring of an Emporia-based doctor. The Lawrence hospital is expected to benefit because Emporia patients with more complex orthopedic needs are expected to be treated in Lawrence.

“Our vision certainly has been how we can be more of a regional orthopedic presence,” Johnson said. “We are very much committed to that.”

The hospital also announced two other pieces of doctor news at its monthly meeting. The hospital has struck a deal to add a rheumatologist to its staff. Hospital officials did not reveal the identity of the doctor, who will start next year. The position, though has been a priority for the hospital because it has not had a rheumatologist for nearly five years, and another provider eliminated its Lawrence service more than a year ago. That has left people needing a rheumatologist — which treats various types of arthritis, gout and other similar conditions — traveling to Kansas City or Topeka for care.

The hospital also announced it has reached a deal to add a third physician to its Tonganoxie office. That doctor is expected to begin in September 2020. Hospital leaders said continued population growth in Tonganoxie led to the decision to expand the family practice there.

The LMH board also received a brief update on the financial performance of LMH Health. LMH continues to see expenses outpace revenues for the year. In September, LMH posted a net operating loss of $1.4 million. For the year-to-date, LMH has posted a $10.6 million operating loss. Investment income, which the hospital receives from its approximately $96 million in cash and investments, has offset those operating losses by about $5.5 million.

• I wanted to pass along a quick piece of banking news that came my way today. Intrust Bank has named Beth Easter as its new community bank president overseeing the Lawrence market.

The position has been vacant for several months after longtime Intrust president Doug Gaumer left the position to work in another market.

I’ll work to get in touch with Easter to find out her plans and some of her views on the changing Lawrence banking scene.