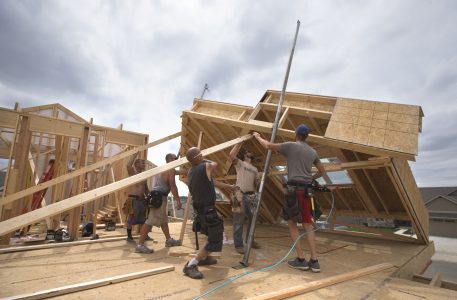 Construction workers lift the wall of a home under construction on Silver Rain Road in this file photo from April 2016.

A slight decline is more likely for the number of home sales next year. Stanley Longhofer, director of the WSU Center for Real Estate, is forecasting that home sales in 2020 will be down about 3.5% from this year’s totals. Longhofer is projecting 2019 will finish with home sales off by 3.4% from 2018 totals. All told, Longhofer is expecting Lawrence home sales to hit their lowest levels since 2015.

The economist said a strong labor market and really low mortgage interest rates should be driving increases in home sales. Most of the state is hamstrung by a lack of new residents moving into the state, he said. But in Lawrence, the problem is a bit different. It is a lack of houses for sale.

“You would think when you have really tight inventories and strong price appreciation, you would see lots of new home construction,” Longhofer told attendees at the annual meeting of the Lawrence Board of Realtors. “The short story is, we haven’t seen it.”

Several local real estate leaders said there is one figure they can point to that is holding back new home construction in Lawrence: $40,000. Several real estate agents and brokers said a vacant building lot in Lawrence needs to sell for between $40,000 and $50,000 in order for a builder to construct a home on it for $250,000 or less. Try to build such a home on a more expensive lot, and the builder won’t get a loan from a bank to do so because the odds of losing money on such a project greatly increases.

The result has been the average price of newly built homes is much greater than $250,000. Through August, the median selling price for a newly constructed home in Lawrence is $342,000. That’s a problem because that price point is higher than many homeowners want to spend to “move up in the market.” Or, in other words, people who are living in a $150,000 home today may like to get a nicer new home, but they can’t afford nearly $350,000 for a new home. A new home in the $200,000 to $250,000 range would be fine, but not many of those are available.

Consequently, some of those potential buyers decide to stay in their current homes, meaning those $150,000 homes aren’t going on the market for the class of buyers who are looking in that price range.

“The fact we do not have $250,000 new construction is a real problem,” said Chris Earl, a co-owner and broker at Stephens Real Estate. “That is driving the price of everything up. We maybe only have two neighborhoods that are building at $250,000 or below.”

Earl, who was part of a panel discussion at the event, said Lawrence isn’t likely to return to its historic norm of offering mid-price new construction anytime soon. Raw land prices are just too high for that to happen.

In terms of lot prices in Lawrence, Rob Hulse, executive director of the Lawrence Board of Realtors, told me there are 93 building lots being actively marketed for sale in Lawrence. Only five of them are priced below $60,000. He said average prices are between $65,000 and $75,000.

What would be interesting to know is how much different the lot price situation looks in other major cities in Kansas. Anecdotally, I certainly hear of lower lot prices in other communities, but it would be good to get harder data on that. I may attempt to do that in the coming weeks.

With such data, we could then start to figure out whether there is something odd happening in Lawrence that causes raw land prices to be inflated compared to other major communities in the state.

There certainly are real estate officials who believe that to be the case. Those of you who follow local politics know where this is going. Real estate agents and builders long have believed that the city’s approval process for creating new building lots is too restrictive and comes with too many costs. They particularly believe the new Plan 2040 comprehensive plan will exacerbate the problem by favoring infill development over the creation of new neighborhoods on the edge of the community. Proponents of Plan 2040 don’t see it that way — rather believing infill development is more efficient both fiscally and environmentally. But not many supporters were at Thursday morning’s meeting.

Instead, there was open talk by Realtors of banding together to try to get the public to better understand the housing situation and create a change in the political momentum in the community.

“I really think we need to change the direction of City Hall,” John Esau, a real estate agent with Keller Williams Realty.

Longhofer, the economist and real estate expert, didn’t dive too deeply into the debate of whether the changes with Plan 2040 are going to put upward pressure on Lawrence home prices. Instead, he said that there are generally two reasons communities see raw land prices increase significantly: natural barriers to growth and regulatory barriers to growth.

He said Lawrence doesn’t seem to have many natural barriers to growth, like mountain ranges, lakes or large areas of land that are off limits like military bases. He said whether Lawrence is placing too many regulatory barriers on growth is an open question.

“Lawrence does seem to have some of the most progressive — or aggressive, depending on your point of view — regulations in Kansas,” Longhofer said. “But it is a double-edged sword.”

He said communities often struggle with balancing regulations that protect a community’s beauty and sense of place versus regulations that constrict the ability to add new development to the point that prices rise quicker than the community wants.

From Thursday’s meeting, it definitely was clear local real estate leaders feel Lawrence is in the midst of that struggle.

Here’s a look at how Longhofer sees home sales and home values stacking up across the state in 2020: