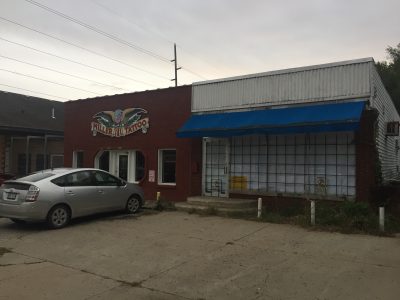 Plans have been filed for Lawrence Jiu Jitsu to locate in the former Mom & Pop's Liquor next to Miller Tattoo at 19th and Massachusetts streets.

After spending 3 1/2 years in a motor home as a “nomad jiujitsu instructor,” maybe it is not surprising that Robert Riley ended up at a Lawrence liquor store. But no, this is not one of those types of stories. Riley actually is turning the old liquor store building into a jiujitsu studio, with the help of a business partner who also has his own story of a winding journey.

Riley and business partner Charlie Hiersche have filed plans to convert the old Mom & Pop’s Liquor at 19th and Massachusetts streets into Lawrence Jiu-Jitsu. Riley several years ago operated a business of the same name in North Lawrence. But then he left his hometown to go to Denver to teach jiujitsu at a famed gym that was producing professional mixed martial arts competitors.

In case you haven’t figured it out yet, jiujitsu is a martial arts discipline that is heavy on grappling and other wrestling-like moves. For some, it also is a life-changing activity that causes you to travel the country in an RV going from gym to gym providing instruction. That’s what Riley did for a little more than three years after leaving the Denver gym, which had started to fall on hard times.

“But, I came to miss my hometown, surprisingly enough,” Riley said of his return to Lawrence.

He didn’t return, though, with the idea of opening a jiujitsu studio. It took a former waiter at Lawrence’s Mad Greek restaurant to plant that seed. Hiersche is the son of former Mad Greek owners George and Peggy Kritos. About 14 years ago, he was a young 20-something working at the restaurant and losing his shape in the process. He had been a wrestler in high school and began looking for an adult wrestling club. He found jiujitsu instead, and Riley was his first instructor.

Hiersche now has gone on to win multiple medals in national competitions, including a third-place finish in the black belt class of this year’s American national championship in Las Vegas.

Hiersche heard his old instructor was back in town and found him not doing much with his training.

“I admittedly was letting my coaching experience go to waste,” Riley said. “I had kind of become inactive as far as training goes. I was his first instructor, but he is more advanced now than I am. It is a situation where, literally, the student has become the teacher.”

“It is not about being the ‘baddest’ guy in the room,” Hiersche said. “It is about knowing your body and being a little bit better than you were the day before. But, if anything ever does happen, you also are going to know how to protect yourself.”

For a lot of people, both Hiersche and Riley say, the sport bleeds over to other parts of their lives. As with many martial arts, discipline is a key component to jiujitsu. Hiersche said the discipline helps practitioners “compartmentalize” their lives. Riley said the benefits also included being part of a larger community. He discovered that when he hit the road going from town to town.

“The closest thing I can (compare) it to is like being a Freemason back in the day,” Riley said. “Everywhere you go, there is a lodge and like-minded people. And they all share a common goal, which is just to get better and to be a better person.”

Lawrence Jiu-Jitsu plans to offer classes six days a week, with many of them in the evening. Class sizes are expected to be around 20 people. The business will operate with a monthly membership model, where members will have unlimited access for a monthly fee, currently set at $80 per month.

The business hopes to open in November but is still awaiting its site plan approval from City Hall. The old liquor store location has limited parking. The city doesn’t want parking from the studio to spill into the adjacent neighborhood. Riley said the business also didn’t want that to happen. He said the business has reached a deal with nearby Cottin’s Hardware to use some of its parking lot in the evenings, and he’s working to get a similar deal with at least one other nearby establishment.