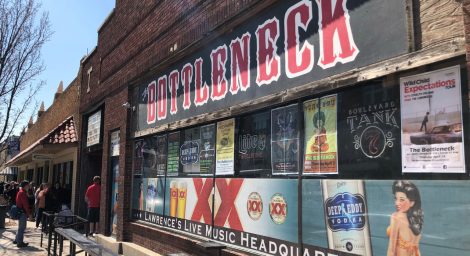 A line forms near The Bottleneck for a surprise show by Panic At The Disco, Friday, March 30, 2018.

The Bottleneck — the gritty downtown Lawrence music venue that has hosted everyone from Radiohead to Jewel — has a new owner.

Mike Logan, who already owns one of the largest downtown music venues in The Granada, has purchased The Bottleneck with a group of investors.

“For me, it is Lawrence against the world when we are trying to convince bands to come here,” said Logan, who also operates Abe & Jake’s Landing and Lucia Beer Garden + Grill in downtown. “To have a venue with this much history really helps.”

Longtime Lawrence concert promoter Brett Mosiman founded The Bottleneck at 737 New Hampshire St. in 1985. The bar started to get a national reputation on the live music scene in the late ’80s and ’90s as Mosiman lured a mix of established and rising star acts such as Radiohead, Smashing Pumpkins, Foo Fighters, Mighty Mighty Bosstones, Jewel, Ben Folds Five, Marilyn Manson and others to play Lawrence.

“It is one of those rooms that are known across the country by bands, managers, touring production folks,” Logan said. “It is a historic venue on the national touring scene. When the opportunity came to take ahold of it, we jumped at it.”

I’m not sure what led Mosiman to the decision to sell, but I’ve got a call into him.

Those type of functional changes, rather than physical changes to the venue, are what Logan will focus on at The Bottleneck, he said.

“We will attempt to freshen up the restrooms at some point, but we’re really looking at it operationally right now,” he said “But the core, I want it to feel and smell like it does today. The feel needs to be preserved with the venue.”

Logan said the change in ownership has created “some holes” in the calendar of shows currently booked for the venue. He said bookings usually happen three to six months in advance.

“The word is getting out there in agent land that The Bottleneck is ready to be aggressive in booking shows,” Logan said. “We are getting a lot of interest in spring plays.”

The purchase also is expected to help Logan in his efforts to further promote downtown Lawrence as a major live music scene. In addition to the concerts at The Granada, Logan leads a group that hosts the Live on Mass concert series that shuts down a block of Massachusetts Street for shows in the summer.

Despite some of that activity, there have been other signs that the live music scene has been struggling. Some promoters say it has become harder to book bands in Lawrence, as many acts want to play larger communities. Logan, though, thinks the energy of downtown Lawrence can be an equalizer in that competition.

“I’m a stated homer when it comes to downtown Lawrence,” said Logan, who grew up in Lawrence. “I was excited to get involved with another venue downtown. I think we have a great vertical here in downtown. We have so many places to eat before or after a show, other places to go to have a good time. I’m excited about how it can all work together.”

I don’t know how Logan was able to pull this off in his household, but I’m pretty sure it wouldn’t work in mine: He has bought not one, but two, 30-year-old bars.

Logan confirmed to me that he has become a partial owner of the longtime neighborhood bar Rick’s Place at Ninth and Illinois streets.

Rick’s Place is 31 years old, Logan said. He’s joining forces with longtime owner Rick Younger on the venture. Logan owns a home across the street from the bar and said he’s always loved that it is a “cool little neighborhood pub.”

He said he’ll work with Younger to broaden the selection of alcohol at the bar, plus make a few other changes to make it a great place to watch a game or celebrate after one. The bar is just a couple of blocks from the KU football stadium and campus.

“We want it to be that great spot that you can walk to,” Logan said.