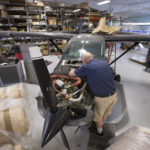 McFarlane Aviation mechanic Andy Pritchard hunches over the engine of a Cessna 337 Spymaster during an annual inspection at the aviation parts and production facility on Thursday, May 5, 2016, at McFarlane Aviation, 696 East 1700 Road in Vinland.

When I’m on a flight, I don’t spend any time thinking about where the parts of the airplane came from. (I keep my focus on obtaining free pretzels, which after the fifth serving pretty much takes a full-time effort.) But the next time I’m on a plane, I probably will wonder whether the propeller came from little old Vinland, Kan.

McFarlane Aviation Products — based in Vinland, which is an unincorporated community between Lawrence and Baldwin City — has signed a deal that makes it a major supplier of propellers for aircraft across the country.

“They are used on everything from Cessna airplanes up to turbo prop commuter planes,” said founder and CEO Dave McFarlane. “They fit most of the aircraft in the United States.”

Perhaps most importantly, they also are high-tech, which has them in high demand. The propellers are manufactured by Germany-based MT-Propeller. They are made out of a composite material rather than the aluminum used for traditional propellers. The composite design greatly cuts down on the amount of vibration, which is appreciated by both pilots and passengers. (I can’t tell you how many pretzels I’ve dropped because of vibration.)

“We think the market for these propellers will double or triple in size very soon,” said Scott Still, president of McFarlane. “We think our market share looks very favorable as more people start understanding the composite material.”

Terms of the deal weren’t disclosed. Still said the owners of Flight Resource approached McFarlane about buying the company, based on the reputation that McFarlane has built in the industry. Still said the deal made good strategic sense because McFarlane already sold a host of engine and airframe parts that also were designed to cut down on vibration.

The deal isn’t expected to add a tremendous number of employees in the near term. McFarlane estimated that another two employees would be added to help with the stocking and distribution of the propellers. But the company’s other parts of the business — McFarlane sells, designs and manufactures more than 2,500 kinds of airplane parts — has been producing plenty of employee growth.

The company now has 110 employees. As we reported in May, the company filed plans for a 24,000-square-foot expansion to house additional manufacturing equipment, which also will open up more warehouse space for the company.

McFarlane said the company didn’t have this deal in the works when it decided to move ahead with the expansion. But he said the deal has made the expansion project even more necessary as the company is moving large amounts of propeller inventory from Flight Resource’s former facilities to Vinland.

Eventually, the company also will need more space for engineers. I always had assumed that changing a propeller was a lot like changing a tire. But come to find out, many propeller installations first require engineering plans. (That explains why my kids always will call me to change their flat tires. They never carry their slide rules.)

The company already understands aviation engineering. McFarlane currently has an engineering division of 15 people. In addition to manufacturing many of its own parts, the company also engineers them and does the technical work to get them approved by regulators.

Still said that may be an aspect of the company that many in the community didn’t understand. The rural company does a lot of advanced work with specialized employees.

“This really is a growing high-tech company that produces those high-quality jobs,” Still said.

The growth of the company has been particularly evident for those paying attention. The expansion announced in May was the third multimillion-dollar expansion this decade. Each of them has produced significant job gains. When we reported on the company in 2011, it had 38 employees. McFarlane said it won’t be long before the company hits the 150-employee mark.