A closer look at Tuesday’s election, including an east-west split that still exists, and possible incumbent angst 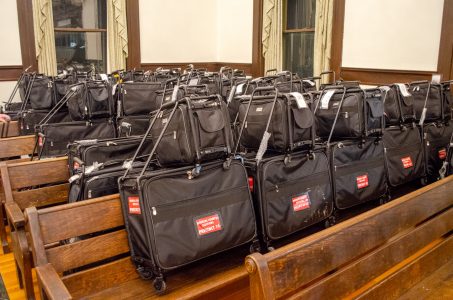 Previously, one of the few things I knew about sidewalks was: If you wait long enough, the snow will melt. Now, I know another thing: All that rage people had over the city making property owners pay to fix city sidewalks in front of their homes didn’t carry much weight at the ballot box.

There were only two real supporters of the city’s sidewalk policy, and both of them won on Tuesday night. Stuart Boley and Brad Finkeldei won two of the three seats up for grabs.

So much for the sidewalk issue being a defining one in the race. It may still be wrong to assume that a majority of property owners like the idea of having to pay to repair public sidewalks that run through their properties. But here’s something that can easily be forgotten in city elections: There are a whole lot of potential voters who aren’t property owners. Renters make up about half the community. If you don’t own property, the idea of property owners having to pay for the repairs may not concern you much.

What did concern voters? That’s not clear yet to me. The results seemed mixed on some fronts. For instance, on the issue of community growth, voters elected two candidates — Boley and Courtney Shipley — who generally favor tougher annexation policies because they are concerned that residential growth may be adding too much to the city’s operating costs. But, they also elected Finkeldei, who largely rejected that notion and expressed concerns that the tighter growth policy would drive up the price of housing. He was the top vote winner. On balance, a win for the folks concerned about growth, but not a resounding one.

It probably will take more time and pondering to figure out what to make of this election. In the meantime, here are some more facts and figures gleaned from the precinct-by-precinct vote totals in Tuesday’s race:

• Incumbent angst? Two of the three commissioners who have terms expiring did not seek reelection. Matthew Herbert and Leslie Soden will leave the commission on Dec. 3. Maybe they knew something about what voters were feeling about the incumbents.

Boley was the third incumbent, and he did win reelection. He finished third, which means he will get a two-year term on the commission instead of the four-year term that Finkeldei and Shipley won.

Boley isn’t the first incumbent to drop to a two-year term. What was a bit striking in the precinct-by-precinct totals is that Boley did not win a single precinct in Lawrence. He wasn’t the second choice in very many, either. When you dive even deeper, the results show Boley finished in the top three spots in just less than 50% of the precincts.

Conversely, though, Boley wasn’t real weak in any precinct. If you finish fourth, but only by four or five votes, that doesn’t hurt your chances too much. All of that can make interpreting the results difficult, but it seems safe to say that voters did not give a major vote of confidence to the status quo.

• Crossover candidates: Finkeldei and Shipley both finished in the top three of about 80% of all the precincts. Although Finkeldei certainly had more top finishes on the west side and Shipley had more top finishes on the east side, they both polled fairly well across the city. As I noted earlier, they are not on the same side of all issues, but it will be interesting to watch whether they can be bridge candidates to bring together some different factions in the city.

• Progressive potential: One candidate who didn’t have a bridge was Joey Hentzler. But he had some of the more interesting numbers of the night. Hentzler, 26, was the youngest candidate in the field and generally was regarded as the one running on the most progressive platform.

Progressive policies were his calling card during the campaign. The results show it resonated very well in the eastern and central parts of the city but fared poorly in the western part of the community.

But when I say Hentzler did well in the east, I mean really well. By my calculations, he finished first or tied for first in 21 precincts. Only Finkeldei, the top vote winner in the race, won more precincts with 25. Hentzler, though, finished fourth. Although Finkeldei held his own in the eastern and central parts of the city, Hentzler did not fare nearly as well in west Lawrence.

It is a reminder that Lawrence still is two cities in some ways. When people talk about how progressive Lawrence is, they often are referring to the eastern areas of town. Democrats in next year’s election, for instance, still will do well in west Lawrence. But the style of progressive politics out west is quite a bit different than the activism style in central and East Lawrence, it seems.

Hentzler’s numbers also serve as a reminder that the Lawrence City Commission would look different if the seats were determined by districts. Currently, all five seats on the commission are at-large seats. If the town were broken into districts, it seems likely that Hentzler would be on the next City Commission. He would have won an East Lawrence district.