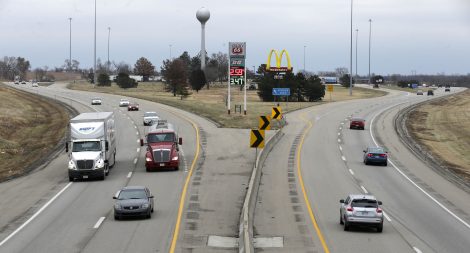 Motorists drive along the Interstate 70 portion of the Kansas Turnpike, past a rest area near Linwood, Kan., Wednesday, Nov. 26, 2014. (AP Photo/Orlin Wagner)

Tucked between Topeka and Kansas City, Lawrence long has been known as a town with plenty of commuters. But the city never has been able to say this before: If you live in Lawrence and have a job, it is now more likely than not that your job is located outside of Lawrence.

New federal and state data show that 53% of all Lawrence residents who have a job commute outside the city to get to that job. That number, which is for 2017, is up from 42% at the beginning of the decade and 36% from 2002, which is as far back as this particular Census Bureau program tracks data.

Lawrence is not the commuting capital of Kansas. Many small towns in the state have more than 80% of their employed residents commuting to larger towns for work. But among large Kansas cities, Lawrence does seem to have the fastest growing population of commuters.

Here’s a look at data from the latest report, which comes from the Longitudinal Employer-Household Dynamics program, which is a partnership between the Census Bureau and state agencies that collect payroll data from employers. Here’s a look at how Lawrence’s outbound commuter percentage compares with other major cities in Kansas and also how much that percentage has changed since 2002:

Whether this trend is good or bad probably depends on whether you are a glass half-full or half-empty type of person. On the positive side, you could argue the trend is evidence that Lawrence is an attractive place to live, so much so that people are choosing to live in Lawrence even though it means they have to spend their time driving to work.

On the negative side, you could argue that there are plenty of people who would rather live and work in Lawrence, but the community isn’t producing enough good jobs to accommodate their employment desires.

More objectively, the numbers probably are a pretty good indication of whether a community is marching toward becoming a suburb of a larger community or whether it is becoming a destination in its own right. Overland Park and Olathe are both clearly suburbs, and their numbers are really high.

Lawrence has always been unique in that it is close enough to both Topeka and Kansas City that it could become a suburb of either location. Community leaders, though, historically have not wanted Lawrence to be a suburb to anyone. There is a feeling that if people are spending their workdays in another location, that makes it more likely they’ll spend their shopping dollars there too. It makes it harder for them to become connected to Lawrence organizations. Plus, there is a pride factor at play.

There has been great pride in Lawrence being its own place. These numbers, of course, aren’t the only way to measure Lawrence’s sense of place. But it is worth asking: Does Lawrence lose some of its independence if so many of its residents are dependent on jobs elsewhere?

Here’s a look at some other information gleaned from the new data:

Perhaps there was some growth in businesses like those, but it likely wouldn’t account for all of the increase.

• Douglas County up: When you look at the numbers of outbound commuters for all of Douglas County, those numbers also are up, but not as much as Lawrence. In 2017, nearly 44% of all people with a job in the county commuted outside the county to work. That was up from nearly 35% in 2002, but only up from 41% in 2010. When looking at counties, Riley County — home to Manhattan — had a much larger bump in outbound commuters. It’s up 12 percentage points since 2002, although only about 2.5 percentage points since 2010. Johnson, Shawnee, Sedgwick and Wyandotte counties all saw their outbound commuter rates grow more slowly than Douglas County’s rate. Why Lawrence’s growth in commuters is so different than Douglas County as a whole isn’t clear. But it might be a reminder that Lawrence may have a different set of issues than the rest of the county.

• Going to Kansas City: You can spot a certain class of Lawrence commuter because they are in near-permanent squint mode. They drive east every day into the rising sun on their way to work in Kansas City and drive west into the setting sun on their way home to Lawrence. The numbers indeed show that the Kansas City metro area is the most popular commuting destination for Lawrence residents. And it is growing. In 2017, nearly 21% of all outbound commuters were going to the KC metro area. That’s up from about 18% in 2002. There are fewer Lawrence residents driving to Overland Park — likely a sign of the declining workforce at Sprint — than there were in 2002. But Kansas City, Kan., Olathe and Lenexa all have seen big increases compared with 2002. Topeka also has grown in popularity as a community destination. In 2017, nearly 7% of Lawrence’s outbound commuters were going to Topeka, up from about 6% in 2002.

• Inbound commuters: It is worth remembering that the roads go both ways. There are plenty of people who live elsewhere but drive into Lawrence for work. In 2017, that number was 49.6%. Think about that for a second. Almost half of everybody who works in Lawrence lives somewhere else. But that number actually is kind of low compared with other large cities in the state. Manhattan is at 60%, while Olathe, Overland Park and Kansas City, Kan., all had numbers in the 70% range. Topeka was at 57%, while Wichita was at about 40%. At first glance, I thought Lawrence’s number was an indication of the city’s affordable housing problem. But when I saw the numbers from the other communities, I thought maybe it is an indication that Lawrence doesn’t have enough quality jobs to entice people to drive here. More than likely, it is a little bit of both.

• Where they come from: Rural Douglas County is likely the No. 1 place people live who commute into Lawrence for work, but the report doesn’t show that very well. In terms of other cities, though, Topeka is tops. It also is growing. In 2002, about 2% of the workers in Lawrence came from Topeka. In 2017 that had grown to 4.6%. Olathe also has seen a big increase. About 2.2% of all workers in Lawrence come from Olathe, up from 0.3% in 2002.

Here is a look at the top 10 places Lawrence workers come from, again, not counting rural Douglas County: