Lawrence ranked one of the best cities for new college graduates, despite some of the lowest wages 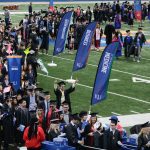 University of Kansas graduates participate in the 147th KU Commencement, Sunday, May 19, 2019, at Memorial Stadium.

The financial news website Business Insider recently published a list of the 20 best metro areas for college graduates looking to start their post-college lives. Lawrence ranked high, despite having one of the lowest median salaries for people 20 to 34 years old.

In Lawrence, the median salary for a 20- to 34-year-old who has a job is just $22,000, according to figures compiled by the Business Insider researchers. Of the 20 cities that made the publication’s list, Lawrence ranked second to last.

Median salary wasn’t the only factor considered in the report. Others, such as cost of living — Lawrence is about 8.5% less expensive than the national average — the unemployment rate and the density of young people all played a part in the rankings.

I’ve shared my thoughts on these types of rankings before: Put as little or as much stock in them as you want. I often find the underlying statistics to be more interesting. This report produced three statistics about Lawrence that caught my eye.

First were the wage numbers. We’ve reported many times on Lawrence’s struggles to grow wages, but I still didn’t expect Lawrence to have the second lowest total on the list, especially since the list includes many other university communities. Even in Midwestern communities, the wage gap is noteworthy. The median wage in Iowa City is about 13% higher than in Lawrence. In Des Moines, it is almost 60% higher.

The second is one we’ve reported on before: Lawrence has a lot of young people, even for a college town. Of Lawrence’s total population, 32.2% are 20 to 34 years old. That is the highest percentage of any of the 260 metro areas studied by Business Insider. I suppose there are a couple of ways to look at that statistic. Lawrence might be able to lay claim to being one of the most powerful magnets for young people in America. Or, there might be something that causes people 35 and older to choose Lawrence in lower numbers, which also would cause our proportion of young people to rise.

The third statistic helped me come to a new realization: Lawrence has lots of young people, but it doesn’t necessarily have lots of young college graduates. Of all the 20- to 34-year-olds in Lawrence, 28.7% of them have at least a bachelor’s degree. Of the 20 cities on the list, Lawrence again ranked second to last.

I suppose there are multiple reasons why that may be the case. One worth considering is whether recent college graduates from KU, Baker and Haskell leave the community shortly upon completing their degrees, while those who didn’t complete their degrees — for whatever reason — stay. That may be a testament to how much fun it is to live in Lawrence, but it also may be a sign that graduates feel like they need to go elsewhere to make what they’re worth.

The only community that had a lower percentage of young college graduates was Gainesville, Fla., home to the University of Florida. It had 28.3% of its young people with a college degree. Gainesville also was the only city on the list that had a lower median wage for young people than Lawrence. Its median wage for 20- to 34-year-olds was just $20,000.

In addition to Lawrence, there were five other cities on the list that I considered to be like Lawrence in that the university dominates the community’s economy. Other than Gainesville, all of those communities had degree rates greater than 30 percent, and, other than Gainesville, all of them had higher median wages for 20- to 34-year-olds. Those are:

Here’s a look at some other facts and figures from the report:

• San Jose was ranked as the No. 1 best place for recent college graduates. It does have a median wage of $43,700 for 20- to 34-year-olds, but even the ramen noodles are expensive there. The cost of living is about 31% more expensive than the national average.

• There was one city on the list with an even higher median wage than San Jose. It checked in at $45,000, and the cost of living basically was right at the national average. And, chances are, you don’t need a college degree to make good money. Only about 22% of young people there have a bachelor’s degree, the lowest of the 20 cities in the report. But before you pack your bags, you may want to change your clothes. The city is Midland, Texas, which is in the center of a booming oil field region. The report ranked it the 16th best place for college graduates — the ones that don’t mind getting dirty, anyway.

You can see the full report and all the rankings here.