From a stone in your pocket to a several thousand dollar gemstone, downtown shop expands for rock lovers 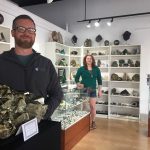 A giant piece of pyrite — fool's gold — is just one of the many unique minerals for sale at Summit's Steps Minerals, 11 W. Ninth Street. Adam Guss, front, and Megan Luttrell relocated the store from a smaller downtown space earlier this month.

I have learned the hard way that there are people in my life who are not a fan of fake gold. (In my defense, it did take me $5 in quarters to get the ring out of the bubble gum machine.) But maybe you are a genuine fan of pyrite — fool’s gold — or any number of other minerals. If so, I have news of a downtown Lawrence store expanding for people just like you.

Summit’s Steps Minerals has moved to 11 W. Ninth St. The space — in between Weaver’s and Wheatfields — is only a couple of doors down from its old location, but the differences are dramatic, owner Adam Guss said.

“This shop is probably about three times the size of the old shop,” Guss said. “We kind of outgrew that shop a few years ago.”

Yes, you are reading that correctly. A store that specializes in selling unique rocks has been so successful that it has outgrown its space. Maybe brick-and-mortar retail is struggling, but rock-based is doing fine.

Guss, who has had the store for more than five years, isn’t necessarily surprised that the business has taken off the way that it has. But he knows a few people who are.

“I think it still shocks my parents that I can make a living doing this,” Guss said.

Guss, though, said the mineral business is seeing growth from several directions. At the business’ foundation are mineral collectors. Just like people collect art, stamps or coins, there are people who want a raw mineral or gemstone to display in their home or office.

“We have some mineral collectors who are looking for certain types of specimens,” Guss said. “Maybe they are looking for a mineral from a particular location or maybe from a mine that closed years ago. And, then, we have some people who just want to have a stone in their pocket.”

As a result, the shop has a wide range of prices. Some pieces are just a few dollars, while others can sell for near $5,000 or more.

“I think we have items here that could be in museums,” Guss said.

The collector market has been fairly stable over the years, Guss said. The segment that has been seeing more growth are people who use gems or crystals as part of alternative healing methods or meditation. Guss said he doesn’t promote himself as an expert in that field. The people who come into his shop already are in tune with that movement and know what they are looking for.

But if you are curious, my friend Mr. Google says there are many movements that believe the elemental nature of crystals make them ideal for connecting to the earth and its natural cycles. One site, energymuse.com, even goes so far as to point out that crystals are used in computer chips. “If it’s possible for crystals to communicate through computer chips, then isn’t it possible that this vibrational energy could be transformed in other ways? (I never thought of it that way, but it makes me feel better about throwing a rock at my computer.)

The third part of the market is simply people looking for a pretty piece of gemstone jewelry or a unique carving. Guss said the store has expanded into that market, and the extra space will allow the shop to take on more of a gallery feel.

He said jewelry made with tourmaline — a gemstone that comes in colors ranging from pinks to greens to black — is particularly popular right now. The store’s website also shows some of the more unique items available, such as a $1,500 skull carved out of larimar, a bluish-white gem stone, or a $160 bowl made from the green and black kambaba jasper stone.

Guss — who operates the shop with his fiancee, Megan Luttrell — said one of his favorite pieces currently is a smokey quartz stone from the African country of Namibia. The stone naturally — with no carving — came out in the shape of a cross.

Guss does not travel overseas to get his stones, but does travel throughout America, he said. He often buys private collections from people who are wanting to sell, and sometimes deals directly with small mines that are willing to sell a few unique pieces. The trips help fuel his love of finding stones, now that he no longer mines for stones like he did when he lived in New Mexico.

“My real passion in all of this is the geological side of it,” Guss said.