On the Border Mexican restaurant closes its lone Lawrence location 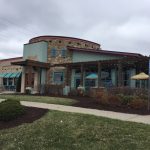 On the Border Mexican restaurant has closed its lone Lawrence location. The restaurant at 31st and Iowa streets closed on Sunday.

I have experience with a border wall. I usually hit one after about my 12th refill of chips and salsa at On the Border. Well, that’s one wall no one will have to worry about any longer. The Mexican restaurant chain has closed its lone Lawrence location.

On the Border closed its location at 31st and Iowa streets on Sunday, and by Monday morning crews already had removed the big sign from the restaurant. I talked briefly with an individual who was in the building. He confirmed that the restaurant was closing rather than doing a remodel. He didn’t provide any specific reasons about why the Texas-based chain decided to close, but he indicated it was for the normal reasons that restaurants leave a market.

There have been other signs that maybe the corner of 31st and Iowa is not attracting as many diners as restaurants had hoped. Right next door to On the Border is the former home of Longhorn Steakhouse. Longhorn closed in July, and the building remains vacant.

I did a quick check for national news about On the Border, and this doesn’t appear to be part of a larger set of closings for the chain restaurant. Although, it is a little difficult to know. The restaurant chain is privately owned by a division of Atlanta-based Argonne Capital Group. Generally, the private companies don’t publicize their cutbacks as much as the public companies, which are required to do so. Perhaps news of other On the Border closings will start popping up in other communities in future days. I put a call into On the Border’s corporate headquarters in Irving, Texas, but haven’t yet heard back.

As for what may happen to the property next, that also is unclear. On the Border did not own the building or real estate in Lawrence. Instead, a group by the name of Iowa & 31st Real Estate Venture LLC owns both the On the Border and the Longhorn site, according to records from the Douglas County Courthouse. That company, in turn, is owned by a Chicago-based firm called Statewide Investments, which includes Peter Dellaportas, a Chicago businessman who was involved in bringing Home Depot and Best Buy to the 31st and Iowa shopping center years ago.

Because both the Longhorn property and the On the Border property are owned by the same group, some of you already have asked whether something larger is up, such as a potential redevelopment of the two restaurant sites. What I can tell you is that I haven’t seen any signs of that. There has been no such development filing that I’ve seen at City Hall, and the Longhorn property currently is being marketed by a commercial real estate group. It is being marketed as an existing restaurant building available for quick lease.

It could just be that Longhorn and On the Border both have made the decision that the Lawrence restaurant market is over-saturated. Longhorn faced new competition from Texas Roadhouse, which also is along Iowa Street. And, as has been well-discussed, there is no shortage of Mexican restaurants in Lawrence. Plus, being a chain restaurant in the Mexican food world may be tough. If you think about it, most of the sit-down Mexican food restaurants in Lawrence are independent restaurants. On the Border does bill itself as the largest chain Mexican restaurant in the country, but it is not huge. It has about 150 restaurants in 33 states, according to information on its website.

I will keep my eyes open for other developments, though. Some restaurant sites have been converted into other uses. The tunnel car wash business that took the former Applebee’s site at Sixth and Monterey Way is one example, and the recent plans for Casey’s General Store to push down the former Steak ‘n Shake location at 31st and Nieder Road in south Lawrence is another.