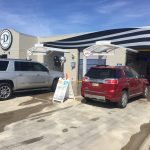 Mr. D's Auto Wash has opened near Sixth and Maine streets in Lawrence. The owners of the local McDonald's franchise bought the car wash and installed all new equipment, including adding a second automatic wash bay.

Rodger Henry got his money’s worth out of his cup of coffee at McDonald’s.

The longtime Lawrence businessman is part of a group that regularly drinks coffee at the McDonald’s at 1309 W. Sixth St. Right across the street from the McDonald’s is a car wash that Henry owned. One day, he asked Tom Dobski, an owner of the local McDonald’s franchises, whether he would ever be interested in owning a car wash.

Eventually, the answer was yes.

“We basically gutted the whole thing and started from scratch,” Dobski said of the renovation, which included adding a second automatic car wash bay.

Before any of the construction could begin, though, there was an important preliminary piece of work to do: convincing his wife and business partner, Marilyn Dobski. You will notice the car wash is named Mr. D’s, not Mr. and Mrs. D’s. Tom said some convincing was needed, including a trip to Las Vegas for a car wash trade show, before Marilyn got on board.

“She said, ‘Are you crazy? Don’t we have enough to do already?'” Tom said.

Dobski, though, said he thought the car wash was in too good of a location to pass up. It basically is the closest car wash to downtown, and he expects the site to be popular with the employees of nearby Lawrence Memorial Hospital and the doctor’s offices. Plus, it is not only across the street from one of his restaurants, but it also is across the street from his company’s corporate headquarters.

“I think there is going to be a bit of a revival in this area of town too,” said Dobski, who also owns the real estate next to the car wash, which houses Anderson Rentals.

As for the renovation, the big change is a pair of new automatic car wash bays that use completely touchless technology. The automated system features all-new equipment that keeps water temperatures hot enough and air pressures high enough to clean vehicles without having to use any brushes that could scratch a car or leave marks.

Other improvements include new LED lighting to make the car wash more comfortable to use during evening and nighttime hours, Dobski said.

Yes, Dobski has noticed that the Lawrence car wash market has been pretty active over the last several years. As we’ve reported, a tunnel car wash opened near QuikTrip at 23rd and Haskell last year. More recently, a Tommy’s Express Car Wash opened at 3900 W. Sixth St. on the lot that used to house the Applebee’s near Hy-Vee. It also is a tunnel car wash.

Dobski said the car wash market has become active recently because of a new wave of technology in the industry, and many chains are starting to invest in market.

“The old-school style of operator where you just have a simple car wash is pretty much gone now,” Dobski said.

The automated technology Dobski installed, for instance, uses lasers to actually measure the size of your vehicle so it can properly adjust the wash cycle to fit your vehicle.

Dobski, who also owns McDonald’s restaurants in several surrounding communities, said he did have more car wash plans. He already has bought two car washes in Topeka and plans to upgrade them with similar systems.