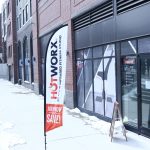 My workout attire of a hoodie pulled tight around my head sometimes causes people to confuse me with Rocky. (In fairness, it may just be because after five minutes on the elliptical, I also only speak in monosyllables.) Regardless, if you too like the idea of breaking a big sweat while working out, there is a new concept in Lawrence: a fitness center that has you do your workout inside a sauna.

The fitness chain Hotworx has signed a deal to locate in the HERE apartment and retail building near 11th and Indiana streets on the edge of the KU campus. The new fitness center won’t have any trouble differentiating itself from others in the market. The facility will include 10 three-person saunas that serve as the primary workout areas.

Each sauna has a flat-screen TV that is used to deliver one of several 15- to 30-minute workouts from a virtual instructor. As you would expect, the sauna is hot, with temperatures anywhere from 120 to 130 degrees. The heat is all part of a philosophy — which may not be backed by science — that hot workouts flush your body of toxins by creating a lot of sweat and kickstart your metabolism to help you burn more calories.

“You get the maximum calorie burn,” said Nicole Jones, general manager of the Lawrence facility. “Even after your workout is over, you are still burning calories.”

The gym offers a variety of pre-recorded workout sessions, but they generally fall into two categories: a 15-minute, high-intensity interval training workout, which involves a lot of cardio work; and a 30-minute isometric session that involves more in the way of stretching, yoga and pilates.

In addition to the virtual instructors, the gym also offers yoga mats specially designed to handle the heat, and lots of big towels. In addition, the business offers a smartphone app that measures calorie burn, allows customers to compete in various workout competitions, and other such features. The center will be open 24 hours a day, and because the classes are delivered via video connections in each workout room, customers can do the workouts on their own schedules.

But, I know what many of you are thinking: Working out in the heat? Many of us have done a workout in beautiful Kansas in August, and that isn’t much fun. Jones said the experience at Hotworx is significantly different.

Construction work is underway on the Hotworx facility, which will be located on the ground floor of the east side of the large HERE building. In other words, it will be on the part facing Indiana Street, not the portion along Mississippi Street. Jones said the business hopes to be open by mid-April. It has started selling memberships now, and they range from about $40 to $60 per month, depending on various specials and other discounts.

“Plus, this is something new, and I have learned that Lawrence loves new things,” Jones said.