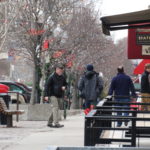 Last week I ran into a city employee who was taking down Christmas lights from downtown street trees. He told me that meant warmer weather was on the way. As I remove snow from my socks, I now believe that fellow has a great future as a groundhog. But maybe the snow has reminded you of Christmas. I do have a new report on holiday spending in Lawrence. It didn’t end up being the blockbuster it once looked like it could be.

The Kansas Department of Revenue has issued its second sales tax report of 2019, and it captures a good amount of the holiday shopping that occurred during December. Lawrence managed to eke out a slight gain compared to last year, but many other retail centers in the state saw a decline.

That’s a different story than what we told last month. The state’s first sales tax report of the year captured holiday spending in the November time period. It showed the shopping season got off to a strong start. Sales tax collections were up nearly 5 percent in Lawrence and were up by more than 10 percent in places like Kansas City, Manhattan, Lenexa and Shawnee.

Shoppers, it seems, slowed down some as the season went along. For the December period, Lawrence ended up posting a 0.7 percent increase in sales tax collections compared to the same period a year ago. It ought to feel fortunate that it posted any gain at all. Topeka was down 5.3 percent, Overland Park was down 3.5 percent and Olathe was down by 1.7 percent.

While the holiday shopping season didn’t end up being a blockbuster, it was a still a decent season if you look combine the strong start and the so-so finish. For the two month period, Lawrence saw sales tax collections increase by 2.7 percent, which is probably a little bit better than the rate of inflation. I also should throw out a word of caution here. While I’m using these numbers as a proxy for the holiday shopping season, they aren’t exact. Sales tax is charged on a lot of things that don’t involve holiday shopping. But this is the best look we are going to get. With that in mind, here is a look at how sales tax collections have fared thus far in 2019 in some of the larger retail markets in the state:

Topeka has the making of a serious situation on its hands. The season started off poorly, it appears, and now there is news that Topeka’s mall is in financial trouble. The Topeka Capital-Journal reported last month that the West Ridge Mall and West Ridge Plaza are three months behind on nearly $50 million in debt payments. The newspaper reported the mall is close to being taken over by its lender.

Lawrence’s mall, of course, is different. (Keep looking in the cornfield, and you probably still won’t find it.) But Lawrence does rely heavily on sales taxes to fill the coffers at Lawrence City Hall. Thus far, though, Lawrence is in OK shape on that front. The city has budgeted for only a 2 percent increase in sales tax over last year’s numbers. With two of the 12 sales tax checks in the bank, the city is at 2.7 percent. If the city begins falling below that 2 percent number, there could be pressure to make mid-year budget adjustments or pressure to raise taxes to compensate in the 2020 budget.

If you are a sales tax geek, you have something new to get excited about as you play with your abacus and wonder when your friends are going to call. The city has begun releasing a new set of numbers that show even more detail about sales tax collections in the city.

The numbers are a month behind the state’s sales tax report — so these numbers basically are for the November period — but they provide a glimpse at which industries are seeing sales increases and which ones are going through a decline.

The numbers show that retail indeed got started off well. With one of 12 monthly reports in the books, here’s a look at how various sectors are performing and roughly how much they have collected in sales tax for the year to date:

These will be fun numbers to keep track of for the rest of the year (the man says over the clicking of abacus beads and a silent cell phone).