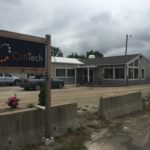 A Lawrence company that focuses on making particles smaller needs its space to get bigger to keep up with its quest to help deliver cancer-fighting drugs to the pharmaceutical market.

CritiTech — a biotech firm that Lawrence leaders long have circled as a company that could grow into a local high-tech success story — has filed plans with the Lawrence-Douglas County Planning Office to expand its North Lawrence headquarters and laboratory facility.

The company has struck a deal to purchase an existing industrial building at 1845 E. 1450 Road, which is right next door to the company’s offices and laboratory facility. If you are having a hard time picturing the location, it is along U.S. Highway 24/59, just north of the Lawrence city limits.

Plans call for CritiTech to do about $350,000 worth of construction work to convert an approximately 8,500-square-foot building into a production facility and laboratory space. The building most recently was used as an automotive repair shop, but it soon could be playing a role in helping fight cancer.

Matt McClorey, president of CritiTech, confirmed to me that the company’s technology currently is being used in two potential drugs that are in seven human clinical trials at the moment. Six of those trials involve cancer treatment. The trials are helping draw more attention to the company.

“Demand for our services is growing,” McClorey said.

I’ll be honest, an unfortunate high school experience involving a Bunsen burner and the “errant” use of a fire extinguisher pretty much squelched my scientific aspirations. But I can explain in broad terms what CritiTech does. It helps make drug particles smaller, which should allow some drugs to be more easily absorbed by the body. For example, the technology might make it possible for some drugs that currently can only be administered orally to be delivered in the future via patches, inhalers, injections and other methods.

Such technology has the potential to really catch the eye of the pharmaceutical industry because changing the delivery method of a drug sometimes can make it more effective or even turn an infeasible drug into a feasible one.

But that eye-catching certainly hasn’t happened overnight. The company is based on technology developed by award-winning KU researcher Bala Subramaniam in the 1990s. The company has grown from a startup to 15 employees currently. The company, though, has been stalled at about the 15-employee mark for several years.

Back in 2012, the company appeared to be on the verge of a breakthrough. At that time, the company’s previous CEO projected employee totals could grow to about 50 employees in the next several years. At that time the company had just created a joint venture with an India-based pharmaceutical company that was going to be using one of CritiTech’s proprietary particle devices in Indian laboratories. That also was near the time that CritiTech moved out of incubator space on KU’s West Campus and moved into its North Lawrence headquarters at 1849 E. 1450 Road.

McClorey this week confirmed that the India joint venture is no longer active and is not part of the company’s current business strategy. He was tight-lipped about the specifics that are driving this latest expansion.

But, according to the documents filed with the planning office, the expansion is related to a second product the company is now working on. The plans note that CritiTech in 2017 converted an unfinished warehouse into a “proof of concept” laboratory.

“The proof of concept production laboratory has proven successful that now CritiTech has purchased the adjacent existing building located at 1845 E 1450 Road for expansion of the production facilities,” the application documents state.

“Due to Food and Drug Administration regulations, it is required that the two types of products that Crititech will process must be located in absolutely separate buildings,” the documents state.

McClorey declined to offer any estimates on how many new jobs the expansion may create, but said “we expect to hire some people going forward.”

The project is outside the city limits of Lawrence, so it will need approvals from Douglas County officials. But most of the approvals needed are simply technical planning items. McClorey hopes the construction will be finished by the end of the year.

As for an even more important timeline, McClorey said it is too soon speculate when one of the cancer drugs CritiTech is working on may make its way to the market. But if you are looking to keep up with the company, it appears watching a Fort Worth-based oncology company is your best bet.

CritiTech is listed as a partner in Fort Worth-based NanOlogy, LLC. The Texas company describes itself as clinical stage oncology company formed by DFB Pharmaceuticals, CritiTech and US Biotest. The company’s website says it has clinical trials in prostate, pancreatic, ovarian, and bladder cancers, among other conditions. The company also plans to begin a renal cancer trial in mid-2019, and is in the early stages of submitting information for a lung cancer drug.

Those are a lot of potential big deals coming out of the Fort Worth area. Companies like CritiTech get economic development leaders excited because they can produce high-paying scientific jobs, and also can help brand a city as a high-tech community. But they also are the type that frequently get lured to larger areas that have a higher concentration of tech companies and technology investors.