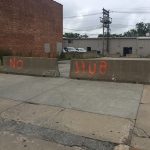 Allen Press, the owners of the vacant lot near 11th and Massachusetts streets recently installed barriers to stop people parking in the lot. Shortly thereafter, graffiti protesting the idea of the Hub apartment complex locating on the site also appeared.

It is not exactly the Berlin Wall, but some chunks of concrete in downtown Lawrence are drawing some scorn — and some graffiti.

A trio of downtown parking lots owned by Lawrence-based Allen Press recently had concrete barriers — like the type you see in construction zones — installed around their perimeter to block any entrances and exits from the parking lots.

The parking lots are part of the proposed site for a major apartment complex and retail building called the Hub on Campus that would have built an approximately five- to six-story building that would have housed about 550 bedrooms. Plans for the building and associated parking garage were denied by city commissioners in early May, after commissioners determined the proposed building would be too big to meet downtown design guidelines. Chicago-based developer Core Spaces and members of the family-owned Allen Press sued the city earlier this month over the denial.

Now, it looks like the company is playing hardball with hard concrete. Some business owners I talked with got the impression the decision to close the parking lots was a direct result of the city’s denial of the project.

Others certainly have surmised that and are making their thoughts known via graffiti on the barriers. Just days after the barriers were installed, someone used orange spray paint to scrawl the message “No Hub” on the two barriers that are along Massachusetts Street, right next to the Einstein Bros. Bagel shop in the 1000 block of Massachusetts Street.

The display on the barriers at the New Hampshire Street parking lot — it is the one across the street from Maceli’s banquet hall in the 1000 block of New Hampshire — has “No Hub” graffiti that stretches the equivalent of about a half-block. The graffiti on a couple of those barriers got a little more personal, mentioning a couple of body parts.

Free anatomy lessons in downtown Lawrence? Somehow, I don’t think that is going to be the new tourism marketing campaign. 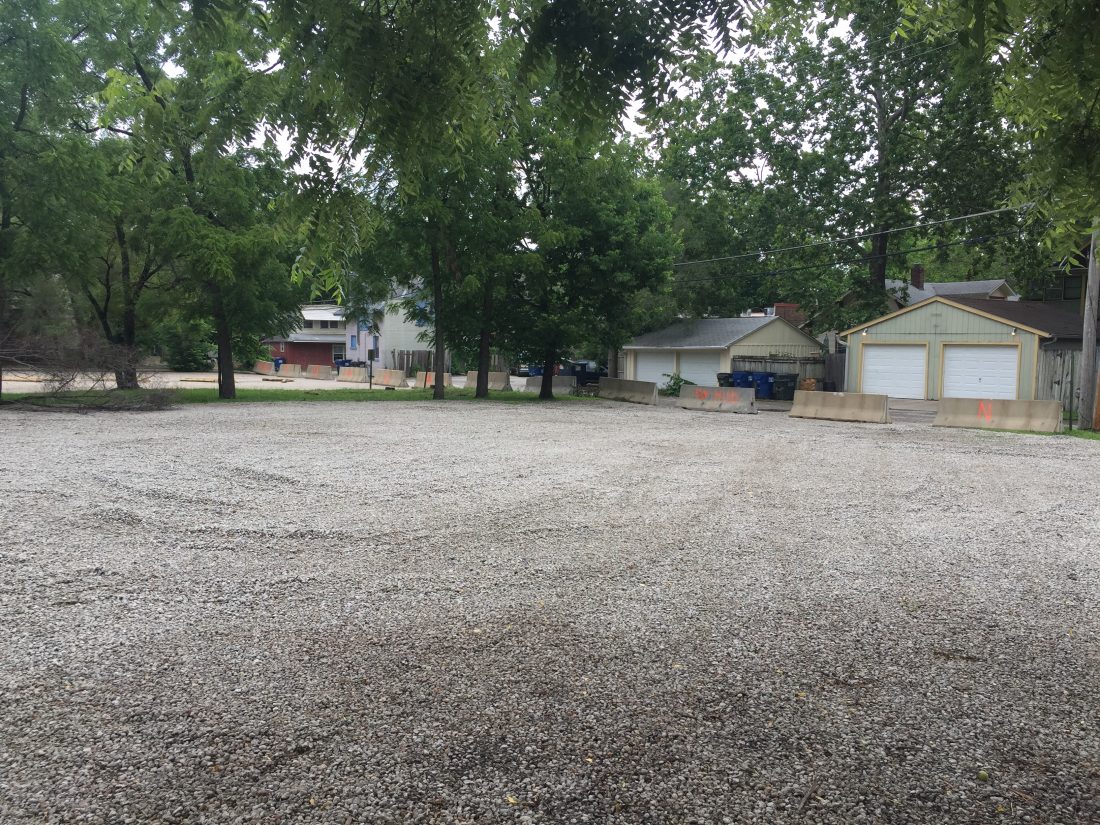 Concrete barriers stretch about a half-block along the parking lot on the east side of the 1000 block of New Hampshire. Most of the barriers have graffiti protesting the idea of an apartment building locating on the site.

But we all may get treated to a soap opera. Drama over the Hub project and the future of those downtown lots likely won’t subside anytime soon. I had one attorney tell me the lawsuit the developers filed against the city easily could take a couple of years to resolve.

There is certainly evidence it could take that long. A North Carolina development group has sued the city over its denial of plans to build a shopping center at the South Lawrence Trafficway and Iowa Street interchange in south Lawrence. That lawsuit was filed in February of 2016 and still is not resolved.

It is worth noting, though, that development group continued to keep a line of communication open with the city, and there has been some indication the lawsuit may get settled out of court and the developers might be allowed to build a modified version of the shopping center. We reported that a new set of plans were filed in October after developers discussed some transportation issues with the city. Those plans, however, are still awaiting approval. Thus far, the south Lawrence gateway has remained a graffiti-free zone while developers and the city hash out their differences.

But disputes in downtown have a way of becoming heightened. My phone certainly started ringing shortly after the barriers were installed. People were expressing concern that businesses were going to suffer by closing the parking lots, even though businesses weren’t the driving force behind the opposition to the Hub. Downtown Lawrence Inc., for instance, told city commissioners that many of its members supported the project and the additional activity it would bring to downtown.

But, I also haven’t heard anybody say that Allen Press is outside of its rights to close the lots. They are privately owned lots. The company was renting the lots to outside users in some cases. Maceli’s and Douglas County government, for example, rented the lots for their customers or employees. I’ve heard from people with knowledge of the situation that after the denial, Allen Press sought to increase the rent it charges for the lots from about $700 a month to more than $5,000 a month.

Steve Maceli, owner of Maceli’s banquet hall, didn’t get into specifics with me but did confirm the proposed rent increase was very large. Maceli said he was confident his business would survive without the parking across the street. He said he has notified his regular banquet hall customers — the city’s biggest Rotary Club meets there, for example — about the reason behind the closure of the lot. He said most customers have been understanding once they’ve heard the backstory. Maceli said he expected the city’s parking garage one block to the north to get more use by his customers.

The lot closure may put a kink in some plans for the Granada, which frequently used the space near its music venue to host outdoor concerts and other events. Owner Mike Logan told me the Granada had leased the space at “very reasonable rates” for about 17 years. He said sometimes the venue would use the lot multiple times per month.

“But we knew there was an expiration on it,” Logan told me. “But we do think it is unfortunate that we can’t use it going forward until an appropriate development occupies it.”

On the disappointment front, the Allen family likely is feeling that about the city’s decision to deny the Hub. Allen Press occupied the downtown property for decades, using it to house presses that printed scientific journals and other publications. But Allen Press built a new facility and moved its operations to eastern Lawrence in, I believe, the 1990s. Allen Press continues to be a major employer in town, with about 265 employees, according to a list kept by the Economic Development Corporation of Lawrence & Douglas County.

But the downtown property has been largely vacant. When Allen Press moved, it was thought the location could develop into a new southern gateway for downtown. Instead, its main Massachusetts Street building — an old grocery store building — has been one of the longest boarded up buildings in downtown. 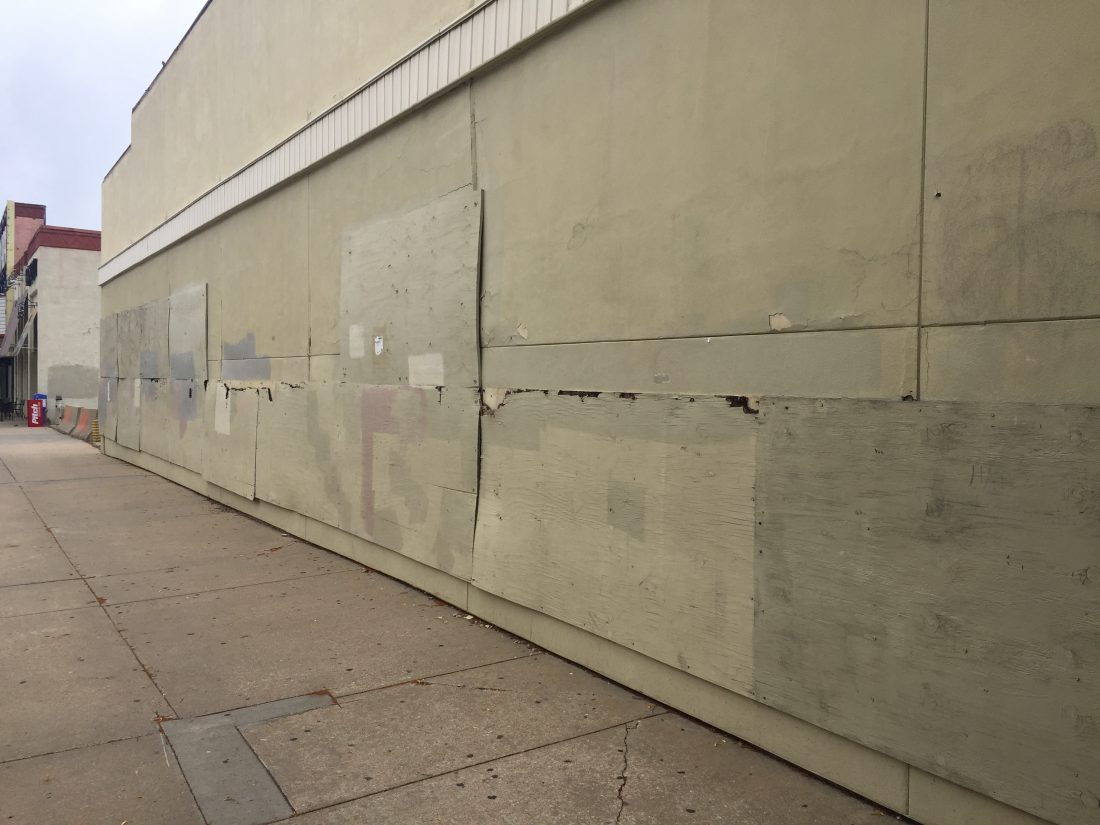 The former Allen Press building in the 1000 block of Massachusetts Street has been one of the longest boarded up buildings in downtown in recent years. The building last month was proposed to be demolished and house a new multistory apartment/retail building. City commissioners rejected the plans on the grounds that the building did not meet the city’s downtown design guidelines.

The old Allen Press site, though, has continued to rack up property taxes. Allen Press last year paid about $67,000 in annual property taxes for the lots it owns along Massachusetts and New Hampshire streets. Given that, it is surprising the property hasn’t come under greater development pressure sooner.

I did reach out to Rand Allen, president of Allen Press, for comment. But he doesn’t make many public statements. I did get an email from Derek Gates, senior vice president of finance and business administration for Allen Press. But he simply said the barriers were meant to prevent vehicular access, since the lots are no longer being used for private parking. He didn’t answer other questions about the situation.