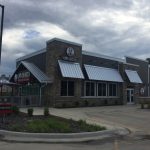 The Slim Chickens location on south Iowa Street has closed after less than two years in business.

If you want to scare a significant portion of the Lawrence population, tell them their city is beginning to look like Kansas City. That has been an attitude for a long time in Lawrence, and perhaps it has played a role in the recent closing of a downtown restaurant. Grinders — owned by a hip K.C. restaurateur — has closed its location at 733 New Hampshire St.

In a Facebook post, owner Jeffrey “Stretch” Rumaner said he plans to reopen the restaurant in late summer or early fall after revamping the concept and bringing in a local management team. In the post, Rumaner indicated that he’s figured out that the formula for a successful restaurant in Kansas City — he owns two in K.C./Johnson County — is different than in Lawrence.

“It is not a Grinders that is just Kansas City coming to Lawrence,” Rumaner said of the new Lawrence version that he’s working on. “It is Lawrence’s Grinders version. I think that is real important for people to understand. We are not trying to force anything on the locals.”

In the same post, Rumaner stated he had missed the mark on the restaurant’s target audience, but also said “I think it is kind of a difficult town to deal with.”

He said a lot of locals and visitors have been supportive, but “at the same time, we have a small group of people who just don’t want to even give us a chance. It is what it is.”

Make of that what you will. As for the changes, Rumaner said he’s no longer going after the college-age market, but he is adding a small, live-music stage to the restaurant. He also plans to add a pool table to the space. Out is a room full of arcade-style video games that the restaurant had been featuring. At one point, he said he’s looking for the restaurant to “still be family-friendly.” That may raise a question with some about whether the restaurant is going to change its sign out front. It touts Grinders LFK. I don’t think the ‘F’ stands for family.

Certainly, the restaurant didn’t have the reputation for being rowdy like some of the Lawrence bars, but a segment of the population really doesn’t like the LFK moniker. Obviously a segment does, but it is interesting to note that Grinders is the first one that has used it so prominently in its marketing, I believe.

As far as the food, Rumaner indicated the menu would stay much the same, featuring New York-style pizza, Philly cheese steak sandwiches and some off-the-wall sides such as “Trailer Park Tator Tots,” and “Half Ass Fries.” (Always a good conversation-starter around the family dinner table.) A variety of sandwiches and chicken wings also are featured on the menu.

Grinders isn’t the first Kansas City success story that has struggled in Lawrence. The other recent example was Port Fonda, the Mexican restaurant at Ninth and New Hampshire that was founded by a KC chef. Port Fonda is trendy and popular in Kansas City, but it closed in Lawrence last year and made way for the more local creation Lark a Fare. There have been other examples too. Does anybody else remember when the family behind KC Masterpiece barbecue sauce and a KC disc jockey briefly opened a KC-themed joint in downtown? It was in the space now occupied by Sushi Ko, which is the restaurant next door to Cielito Lindo, and was short-lived.

While I find the relationship between Lawrence and Kansas City interesting — Lawrence’s economy probably relies on the growth of Kansas City more than many people would like to admit — there probably are other reasons why some of these restaurants have struggled.

“We are cleaning the entire place from top to bottom,” he said. “It was not as well-kept as it should have been. And again, due to what was going on in that space, I think a lot of people lost their will to continue doing what we needed to do.”

Look for the new version of the restaurant to open in late August or early September, he said.

The other news of a restaurant closing probably doesn’t have anything to do with Kansas City. Instead, it probably is in reaction to a massive supply of chicken restaurants on south Iowa Street. (In south Lawrence, no one cares why the chicken crossed the road. There are deep-fryers on both sides.)

Regardless, I have confirmed that Slim Chickens has closed its restaurant at 2412 Iowa St. According to a sign on the door, “due to new ownership and management,” the decision was made to close the Iowa Street location.

The Slim Chickens location at 701 Wakarusa Drive will remain open, according to the sign.

If you remember, Lawrence went through a period a couple of years ago where a large number of chicken chains started opening in Lawrence, particularly on south Iowa Street and in northwest Lawrence. Slim Chickens, though, was one of the more aggressive chains. It decided to open two restaurants in Lawrence, basically back to back. It also built brand new space for both restaurants.

The south Iowa restaurant that recently closed is in a building less than 2 years old. Surely another restaurant — maybe not a chicken one — will occupy it. I’ll let you know if I hear any details.