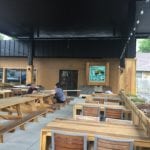 You probably have heard of breakfast burritos. But a breakfast tamale? (Caution: Getting the Froot Loops and the milk into the corn husk can be messy.) Actually, look for a new shop that will serve a better version than that. A local restaurant owner has signed a deal to open Mama’s Tamale Shop just outside of the downtown area.

Angelina Cruz — along with her husband, Maximo — have reached a deal to open Mama’s Tamale Shop in the space formerly occupied by Sully & Hank’s restaurant at 602 W. Ninth St. Angelina plans to have about 30 tamale recipes on the daily menu, including some with ingredients you don’t expect.

“In Mexico, you can get them with cinnamon, vanilla and raisins and drizzled with raspberry sauce,” Angelina said. “That’s what they like to have with their coffee.”

Though the restaurant will serve breakfast, expect plenty of lunch and dinner tamales as well. Angelina said the restaurant would be serving at least three forms of rotisserie-cooked meats — al pastor pork, carne asada steak and a Mexican chicken — that can be used in the tamales. In addition, Mexican picadillo, a combination of beef, potatoes and spices, will be a mainstay on the menu, she said, along with other traditional fillings like ground and shredded beef and Mexican chorizo sausage. But also look for some international crossover. Italian sausage will be an offering, along with smoked sausage and bacon.

“I’ve been collecting recipes in my brain forever, and it is about to explode,” Angelina said.

For the last nine years, Angelina and her husband have owned and operated Burrito King, which is just down the road on Ninth Street. Angelina said they would continue to have that business but were working hard to keep the two restaurants separated. The Burrito King is more fast-food, late-night drive-thru fare. Angelina said she wanted Mama’s Tamale Shop to be about offering something more crafted and unique.

“I’m artistic with my food and really want to have the time to do that,” Angelina said.

For example, she said a vegetarian tamale was one of the recipes she was most excited about. It will have spinach and a mix of peppers, onions and cilantro. The vegetables won’t just be contained to the filling but also will be mixed into the homemade masa, which is the cornmeal dough that forms the soft shell of the tamale. As an extra touch, before she wraps the tamale in the traditional corn husk, she’ll first wrap it in a spinach leaf decorated with fresh cream and cheeses.

The name of the restaurant will serve as a reminder of the extra care that she hopes to put into each dish.

“It is a tribute to all the mothers who have inspired me to cook my whole life,” Angelina said. “This restaurant has been a dream of mine for a long time.”

In addition to the tamales, the restaurant will have street tacos and empanadas — a type of stuffed, fried pastry — on the menu.

Also look for some changes to the restaurant site. The space is a converted convenience store/gas station, and it always had limited indoor seating when it operated as Sully & Hank’s. As we’ve reported, plans have been filed to partially enclose the large canopy area in the restaurant’s parking lot, which previously was the area where gas pumps were located. Angelina said plans called for large garage doors to be installed along the sides of the canopy, which will allow the doors to be open or closed based on the temperature, the direction of the wind and other such factors. That change should create a significant number of new tables that can be used to serve diners in pretty much any type of weather.

Changes to the inside also are on tap. Angelina said she wanted the restaurant’s kitchen to have a very open view to the public.

She said she hoped to have the restaurant open by the end of August.