Auto dealer to build new showroom on 23rd Street; ice cream shop on the move and other news and notes 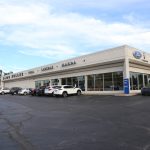 Look for yet another new development in the Lawrence auto industry. Laird Noller Automotive has filed plans to build an additional used car showroom on 23rd Street.

The longtime Lawrence dealership has filed plans to build an approximately 3,000 square-foot used car showroom on a largely empty lot across the street from its Ford, Lincoln and Mazda dealerships near 23rd and Alabama streets.

Bennett said the company has owned the lot, which is on the north side of 23rd Street, for several years. It has been used to store excess inventory for the company’s new vehicle department. Bennett said the company now wants to focus on expanding the number of used vehicles it can offer. The building will provide an indoor showroom for vehicles, offices and garage bays to clean and process vehicles.

Look for construction to begin later this year after the project wins site plan approval from City Hall.

The project is the latest in a string of developments for the auto industry. Those have included: Dale Willey Automotive purchasing the Ellena Honda dealership and the Dodge, Jeep, Ram Chrysler dealership from Manhattan-based Briggs Auto Group; Kansas City-based McCarthy Auto Group purchasing the Nissan and Subaru dealerships from Briggs; and the owners of Lawrence Kia opening a Mitsubishi dealership along 23rd Street.

Bennett, who has been a longtime leader in the Lawrence auto scene, said it was probably the most change he had seen at once for the Lawrence industry. But he thinks the changes happening all at once may be more of a coincidence than the sign of a new trend or shift in the Lawrence marketplace.

“There are always certain times where there is turnover,” Bennett said. “This just happens to be a time where it is happening all at once.”

Ice cream shop on the move

Here is a trend I have my eye on: high class soda and homemade ice cream in a single trip. Probably followed by a sugar-fueled attempt to climb the clock tower of the Douglas County Courthouse.

In other words, I have news that the longtime downtown ice cream shop Sylas and Maddy’s will move into renovated space across from the Douglas County Courthouse later this year. That would put the ice cream shop next door to the Mass Street Soda company.

I’ve heard the rumor for a few weeks, and I have a message into an owner of the ice cream store. But now I’ve seen some official documentation. Plans have been filed at City Hall to renovate space at 1101 Massachusetts St. for the shop. That’s the building that used to house Englewood Florists before the flower shop moved to North Lawrence.

From what I’ve heard, the move isn’t happening right away, but rather will occur toward the end of the year. But I expect to hear back from an owner of the shop, and I’ll provide a more detailed report then.

The shop currently is located at 1014 Massachusetts St.

The company also got another boost recently. Late last month Travel + Leisure magazine named Sylas & Maddy’s the best ice cream shop in Kansas as part of an article that highlighted one shop from every state. The shop’s fresh waffle cones and a menu that includes at least 40 flavors of ice cream at any given time were highlighted. For some reason, though, the company’s Olathe location was highlighted rather than the downtown Lawrence store.

I’ll also be keeping an eye open for some activity at the former Sully & Hank’s location near Ninth and Louisiana streets, just west of downtown. If you remember, that was an old convenience store/gas station location. Now there are plans to take advantage of that gas station vibe.

Plans have been filed at City Hall to largely enclose the area underneath the canopy that used to cover the gas pumps. Sully & Hank’s, which closed earlier this year, had developed a patio under the canopy, but it still was largely exposed to the elements.

Longtime Lawrence restaurant owner Brad Ziegler owns the property. He told me recently the plan was to make the area under the canopy more hospitable during all seasons, which should go a long way in increasing the capacity for any future restaurant.

As for a future restaurant, I have no official word, but I believe a deal is very close with an existing restaurant owner. I’m working to get more information on that front and will report more.