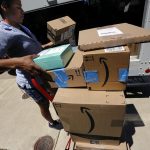 I have heard that people sometimes have one identity in the real world and another online. Maybe that is happening in Lawrence. In the real world, we’ve been a bunch of spendthrifts thus far in 2019. But online, our purchases are melting credit cards across the city.

The city recently received its sixth of 12 monthly sales tax checks from the state, with this one largely capturing sales that were made in April. Maybe Lawrence residents hid their sorrows of KU missing out on the Final Four by diving into a spot that has even more madness than the NCAA basketball tournament — Amazon.com.

What is going on? Has Lawrence switched its shopping preferences to online stores much more aggressively than in the past? I know some people are wondering. I’ve heard from others in the community who watch sales tax numbers (we all gather in the back of the abacus store) who are trying to figure out the latest softness in sales tax numbers. Unemployment is very low and the stock market is very high. That usually is a good recipe for consumer spending that leads to increased sales tax collections.

One theory certainly is that Lawrence residents are doing a greater share of their shopping online. But when you look a little deeper at the sales tax numbers, you will find that slumping retail sales aren’t the main driver of Lawrence’s declining sales tax collections.

General retailers have seen an increase of 4.5% thus far in 2019, according to state figures that the city has access to. That’s not a great increase, but it is solidly above inflation. Instead, car dealers are the ones facing the toughest headwinds. Overall, the city has collected about $154,000 less in sales taxes in 2019 than it did at this point in 2018. Of that, $114,000 of the decline comes from the motor vehicle and parts category of the economy. The car business is off about 6.6% from a year ago. This comes on the heels of some pretty good years in the business. Since most people don’t buy a new car every year, it is pretty standard for that business to be cyclical.

The other big category that is down is utilities. You pay a sales tax on your utility bills. The city has collected about $98,000 less in such sales taxes than a year ago. Utility sales tax collections are off by about 13%, presumably due to different weather patterns and a rate cut that was approved for Westar electricity customers in late 2018. If you have forgotten, that $66 million rate case resulted in about a $3.80 per month reduction in the average electric bill.

So, actually maybe Lawrence residents are still spending lots of money in these good times of low unemployment and high stock returns. They may be keeping their local purchases steady or even slightly higher, but they are doing a lot of their truly extra spending online. I mean, an 18% increase in use taxes is a sign a lot more commerce is happening online. That is troubling for local retailers, but not as much as it would be if they were also seeing a corresponding decline in their local sales. The big question will be what happens when the good times end. Will shoppers cut their online spending or their local spending?

What is particularly interesting is this trend of soaring use tax collections is not happening everywhere. For example, use tax collections in Topeka are down 1% for the year. Prosperous Overland Park is down 0.4% in use tax collections. Manhattan, full of tech-savvy college students, is actually down the most of the handful of cities I looked at it. Its use taxes are off 2.6%.

Of the five communities I looked at, Sedgwick County — which is home to Wichita — is the one place that rivaled Lawrence in terms of an increase. Its use taxes are up 16.8%. Wichita — the most industrial city in the state — is a good reminder that use taxes aren’t just for Amazon or other such consumer purchases. A big company that buys an expensive piece of equipment from out of state would pay a use tax as well. I don’t know if that happened in Wichita, or for that matter, in Lawrence. I doubt that is the case in Lawrence because the increases have been happening month after month instead of one monthly spike.

It sure seems noteworthy that Lawrence is seeing such a large increase, but the reasons why are tougher to know.

For the time being, City Hall budget makers are just glad for the increases, whatever the reason. The increase in use taxes is making up for the decline in sales taxes. Citywide sales taxes are down $154,000 year to date, but use tax collections are up almost $250,000. Despite some rumblings to the contrary, sales tax woes likely aren’t going to sink the city’s budget in 2019.

In fact, the June sales tax report included some good news. For the month, Lawrence sales tax collections were up 0.3% compared to the June 2018 report. That ended a string of three consecutive months of downturns.

Here’s a look at how some other major retail communities in the state are fairing. It is all over the board, but there are more tales of downturns than upturns. These numbers are for year-to-date totals compared to the same period a year ago:

Since we are at the sixth month mark, I also looked at some of the smaller area communities, which also rely on sales taxes. Here’s a look at their year-to-date numbers: