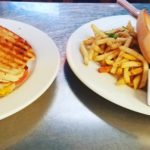 A chicken panini and a Chicago-style beef sandwich are among the menu items at the new 1856 Bar and Grill, which replaces Genovese in downtown Lawrence.

Regrettably, the new 1856 Bar & Grill in downtown Lawrence isn’t an excuse for me to wear my spurs and other fancy western attire after all. The place — located in the former home of the Italian restaurant Genovese — isn’t some sort of themed restaurant.

Subarna Bhattachan, an owner and manager of the restaurant, though, said Genovese needed to change from its roots as a traditional, somewhat upscale Italian restaurant. So, 1856 has added to its menu everything from street tacos to hamburgers to a variety of pressed sandwiches. It also has about a half-dozen pasta entrees and a pizza menu.

“It is a combination of American, Italian and bar-and-grill food,” Bhattachan said. “We decided we wanted our food to be approachable to everyone. If the whole family comes in, there is something for the mom, the dad and the kids.”

More specifically, Bhattachan said the market is just changing somewhat in Lawrence, and the restaurant’s owners decided it needed to have a menu that offered some lower priced items. The new menu features a large number of items at $10 or less, which wasn’t the case at Genovese.

“We got feedback from younger people, like students, and some other customers who said they would like to dine with us more often, but the price was a little bit problematic,” Bhattachan said.

Genovese had been in business for 11 years, but Bhattachan said you have to be willing to change in the restaurant business.

The new pricing strategy, though, did require the kitchen staff to get creative, Bhattachan said, because he wanted the menu to be high quality.

“It is a bit more simple and a little bit more casual and a little more value conscious, but we still want it to be chef driven,” he said.

Some examples of that include little things, like the french fries that come with each sandwich. Instead of standard fries, the restaurant serves them in a garlic parmesan style. The pizza menu offers toppings such as goat cheese, pesto, zucchini and pancetta. The appetizer menu offers fried calamari, mussels and “fusion tartare,” which features ahi tuna, wontons, pickled ginger, spices and sauce.

He said the restaurant’s alcohol menu has become less focused on wine and a little heavier on craft beer offerings.

As for the restaurant’s name, he said the 1856 moniker is a salute to the year that was a very active one for Lawrence in the Bleeding Kansas period. It was the year that pro-slavery forces led by Sheriff Samuel Jones sacked Lawrence and the city became a focal point of the entire country as everyone held their breath over whether a Civil War would begin. The following month in 1856, the Battle of Black Jack took place near Baldwin City when troops led by John Brown fought with pro-slavery forces, creating a further drumbeat of the war to come.

“We just felt like it was a pivotal time for the history of our city and was worth remembering,” Bhattachan said.

• Bhattachan also is an owner of La Parrilla, a downtown Latin American restaurant that at one point had a sign up saying it was closed for remodeling, but more recently has a for-lease sign in its window at 724 Massachusetts St.

Bhattachan is part of the group that owns the building. He said the group has made the building available for another business to lease but also hasn’t ruled out a reopening of La Parrilla.

He said the building has some oddities that created challenges for the restaurant’s operations.

“We thought we could make that place work, but the kitchen is on the second floor,” Bhattachan said. “That makes it very difficult and inefficient to operate. It was hard to provide the service that we want to provide.”

He said the group is studying whether it would be feasible to move the kitchen to the ground floor, but said no determinations have been made.