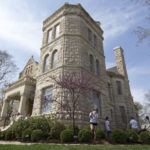 The Castle Tea Room has long hosted odd things. (I still don’t know what I’m supposed to use that tiny fork for.) Soon, though, it may host a whole new type of oddity — aspiring technology entrepreneurs.

A new nonprofit called Launch Lawrence has formed and announced a goal of raising $250,000 to locate a training center for technology entrepreneurs inside the historic Castle Tea Room at 1307 Massachusetts St.

Kyle Johnson, the founder of Lawrence-based tech startup Bixy, leads a group of eight other tech executives or financial professionals who have formed a new nonprofit board. The group hopes to do enough fundraising to lease space at the Castle Tea Room and hire an executive director who would oversee a year-long training program for aspiring technology entrepreneurs.

The Castle, in essence, would become a schoolhouse and a drop-in center for people who think they have the next big tech idea. The key to the project, Johnson said, is the center will be led by people who already have successfully started technology companies.

That’s critical, Johnson said, because he believes starting a technology company is much different than starting a more traditional retail or service-oriented business. Entrepreneurs looking to start those type of businesses can get good assistance from places like the KU Small Business Development Center, which shares office space with the Lawrence chamber of commerce.

It takes a different type of mindset to start a tech company, Johnson argues, because most tech startups are basically assured of not making any money for a number of years. Instead, they rely on friends, family and other investors to provide the company with enough cash while the fledgling company hopefully makes a technological breakthrough that then will solve a big problem that makes a ton of money.

“That does not look like a normal business,” Johnson said. “Most people don’t go into business planning to raise capital and not generate any revenue for several years.”

If Lawrence could learn how to create a steady supply of tech entrepreneurs, it could transform the local economy, Johnson believes. The Launch Lawrence group has set a general goal of helping create 10 new technology companies that will employ a total of 3,000 people. When pressed for more details, Johnson said he thinks that could happen by 2030. Maybe it could happen a couple of years quicker, but Johnson said what the new nonprofit is embarking on is always going to be a long-term project.

“It is really not a magical process,” Johnson said. “It is really a process of hard work. Somebody decides they are going to create a startup league for entrepreneurs, and then you identify people who are willing to work, you teach them, and it takes years.”

Lawrence has a chance for success, though, because of its highly educated population, its good quality of life and reasonable access to capital through wealthy Lawrence residents and through the network of KU alumni, Johnson said.

Johnson is betting that what has been lacking is a group of entrepreneurs willing to share the expertise on how to start technology companies.

“Entrepreneurs have to lead the way,” he said. “If you haven’t done it before, it makes it really hard to figure out how to do it.”

Other members of the Launch Lawrence board include:

Launch Lawrence certainly isn’t the first group that has expressed a desire to improve Lawrence’s standing as a hub for startup tech companies. The city, the county, KU, the Chamber and others have partnered to create the bioscience and technology incubator on KU’s West Campus. Some of those projects have gone well, with the primary incubator space consistently housing a lot of companies. Other efforts, such as the idea to convert a west Lawrence laboratory building into space that would help Lawrence attract and keep larger tech companies, have struggled financially.

Launch Lawrence’s first test will be financial. Johnson is hoping to raise the $250,000 to secure the Castle space in the first quarter of this year. Thus far, the nonprofit doesn’t plan to seek any financial assistance from local governments, Johnson said.

Fundraising is the primary financial strategy for the group in the beginning, but eventually the nonprofit hopes to create a fund of local angel investors who will invest in companies that Launch Lawrence helps start. As part of that process, the nonprofit will receive a small ownership stake in each new company created. Royalties or proceeds from the sale of those companies will sustain the nonprofit, although Johnson acknowledges that is years away.

As for the Castle, it continues to be owned by a nonprofit that has a mission of protecting the architecture and integrity of the unique stone structure that was designed by famed architect John G. Haskell and built in 1894 for wealthy Lawrence businessman John N. Roberts, who manufactured everything from cheese boxes to broom handles. The Castle in recent history has hosted a variety of wedding receptions and other events. I haven’t received any official word about how those types of uses for the facility would be impacted by the Launch Lawrence plans.

• While talking with Johnson, I did ask him for an update on his Lawrence startup Bixy. As we have reported over the years, it is a tech company that is aiming to change how online advertising is sold.

The big news from the company is has signed its first national advertiser. American Eagle has inked a deal to start using the Bixy platform later this year, Johnson said. Bixy also has been in discussions with Microsoft, Macy’s, Priceline and Best Buy, Johnson said.

“I think 2019 will be a pretty important growth year for us,” Johnson said.

In short, Bixy has created an app that allows consumers to pick — via the use of surveys — the advertisers they want to see when searching the web. The Bixy users get rewards through special coupons and discounts, plus points that have a cash value.

The company, though, is an example of the oftentimes slow process for tech company startups. Johnson has been working on Bixy for six years. The company has the equivalent of seven full-time employees — four of them in Lawrence — plus a larger number of contractors scattered throughout the country, Johnson said.