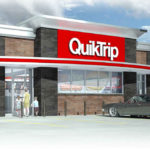 Renderings show the proposed design for a QuikTrip at Ninth and Iowa streets in Lawrence.

Gear up for a gasoline battle. QuikTrip has filed plans to build a second store in Lawrence.

It would replace those three buildings with a new 5,000 square-foot QuikTrip convenience store that would have six double-sided pumps, meaning they could accommodate about 12 vehicles at a time. In addition, the plans call for a large parking lot of about 40 spaces. Also, the project would keep the existing Scooters drive-thru coffee shop that is on site.

The Ninth and Iowa corner is unique in that it has a small cut-through street — West Ninth Street Terrace — that allows motorists to turn right off of Iowa Street and get onto Ninth Street without going through the signal at the intersection. Plans call for the fuel pumps to be on the north side of Ninth Street Terrace, while the QuikTrip building would be on the south side of the street. A note in the application says the project would seek to acquire the right-of-way of Ninth Street Terrace, meaning it no longer would be a city street. However, the plans show the entrance remaining. It looks like what is now a city street would function more like a driveway for the development.

The plans below give you an idea of the layout. 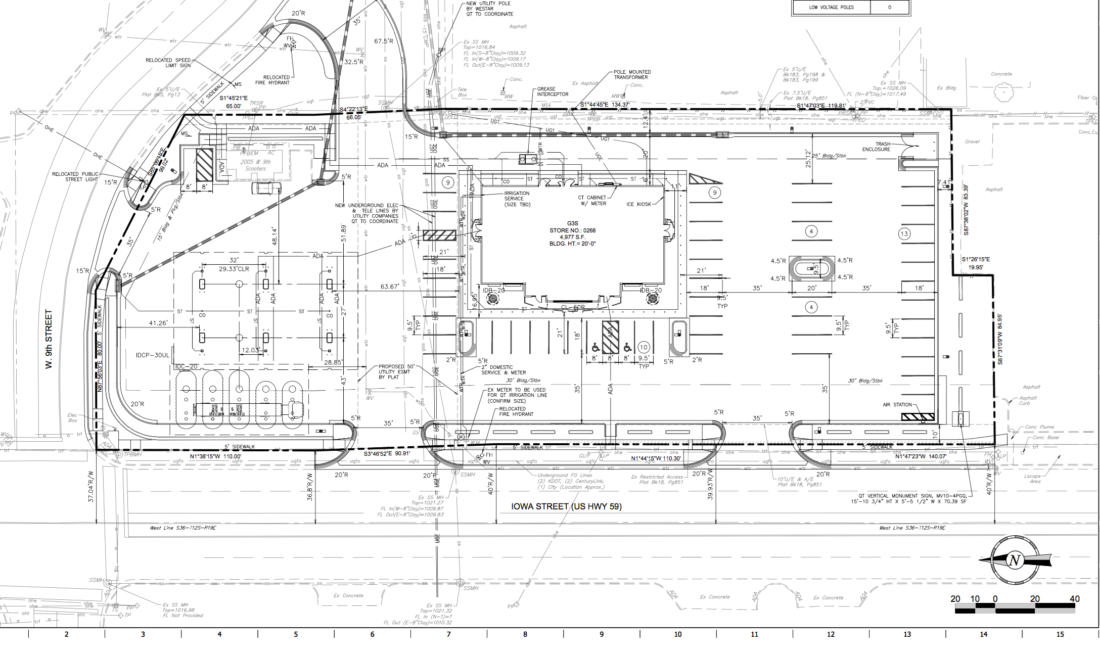 A site plan shows the proposed layout of the QuikTrip development at Ninth and Iowa streets. The convenience store is shown in the center of the site. The fuel pumps are shown near the left edge of the site.

The QuikTrip would be the latest change to an evolving Lawrence gasoline market. First, the company that owns Dillons sold its Kwik Shop chain — which is the largest convenience store chain in Lawrence — to a British-based firm. While the look and general operations of Kwik Shops didn’t seem to change much, it does seem like the pricing strategy is a bit different. I’ve noticed the fuel prices at Kwik Shops can vary quite a bit depending on which area of town you are in.

The second big development was the announcement that Casey’s General Store plans to enter the Lawrence market. It has filed plans to build a large convenience store at 1703 W. Sixth St., which is the site of the College Motel and Action Automotive. Those plans were filed back in 2017, but after working its way through the city’s planning process, the project has won approval. Casey’s has officially purchased the property, so I would expect that project will be moving quickly in the spring.

QuikTrip will be going into roughly the same neighborhood. The Ninth and Iowa site is about a half-mile from the Casey’s site.

Whether it is coincidental or not, the change in the gasoline market has coincided with Lawrence fuel prices becoming cheaper. Traditionally, Lawrence has had some of the higher fuel prices among Kansas metro areas. But for a period this winter, Lawrence had the cheapest gas prices in the state, and at one point last month had the 14th lowest gas prices of any metro in the country. That trend has abated some in 2019. This week Lawrence had an average fuel price of $2.01 a gallon, while Kansas City, Wichita and Topeka all had average prices below $2 a gallon.

Gasoline, though, may not be the only thing driving the convenience store market in Lawrence. All the companies are gearing up for a major law change on April 1 that will allow convenience stores, groceries and other retailers to begin selling full-strength beer. Previously, only liquor stores could sell full-strength beer, while other retailers could sell only “weak” beer, which has a 3.2 percent alcohol volume.

Mike Thornbrugh, a spokesman for QuikTrip, said the law change should bring a significant increase in business to convenience stores.

“For the average convenience store, beer is a big category,” Thornbrugh said. “It is 10 to 15 percent of overall sales for a store. In Kansas, it is less than 1 percent. You can see the growth curve that is going to happen.”

“Hopefully, this is just our first expansion in town,” Thornbrugh said.

As for what the store will include, expect it to lots of food, especially grab-and-go items. Thornbrugh said QuikTrip definitely considers itself a player in the restaurant market. Pizza, flatbread sandwiches, a variety of breakfast items, and both grab-and-go and made-to-order sub sandwiches are big parts of the company’s offerings.

“We will continue expanding our menu too,” he said.

The project will have to win various site plan approvals from the city — think of issues like driveway locations on Iowa Street, for example — but once city approvals are granted, the project should take five to six months to construct, Thornbrugh said.

The project does mean a change to one of the few locally owned convenience store companies. Zarco is based in Lawrence. With the sale, it will continue to have a location at 1500 E. 23rd St. I’ve got a call into Scott Zaremba, owner of the Zarco chain to find out more, but haven’t heard back.