What’s all the construction at the retail site by Rock Chalk Park? Despite hopes, it’s not a Costco 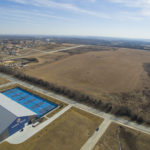 This file photo from February 2018 shows land south of Rock Chalk Park in northwest Lawrence that is slated to become the Mercato shopping center. Surrounding the undeveloped shopping center site are a hotel, at far left, and land that will become home to a large Lawrence hospital facility, at right.

If I had a dollar for every time there was a rumor that Costco was coming to Lawrence, I would have about $12, which would put me more than halfway to my new life goal of buying Costco’s recently introduced 7-pound tub of Nutella.

The rumors almost always involve the superstore retailer locating in the undeveloped Mercato shopping center next to Rock Chalk Park in northwest Lawrence. Those rumors have picked up lately. There are bulldozers on the site, and bulldozers are always good for rumors (and spreading large amounts of Nutella).

But after a couple of weeks of tracking down a member of the Mercato development group, I can confirm earth is not being moved for a new Costco. In fact, it is not being moved for any new retailer. Both the developer and the city have confirmed it simply is road construction related to Lawrence Memorial Hospital’s new $100 million outpatient center that is being built next to Rock Chalk Park.

If you remember, LMH is building the new 200,000-square-foot building on a site that is basically kitty-corner from the KU tennis center at Rock Chalk Park. The city is requiring some road changes in the area to accommodate that large new facility. They are road changes that Sixth Street motorists may soon notice.

Currently, when you are on Sixth Street, there is one road that travels north between George Williams Way and the South Lawrence Trafficway interchange. That is East 902 Road, which is the frontage road that runs along the west edge of the trafficway. The entrance to the road is so close to the SLT entrance ramp, I’m sure we’ve all made that mistake and ended up going 75 miles per hour through a pasture on our way to Topeka. (Cruise control is great.)

That situation, though, is going to change. The new plans require the entrance to the frontage road to be moved. It will be moved farther to the east so that it is about halfway between George Williams Way and the SLT interchange. That will put the road basically in the middle of the Mercato shopping center land. The map below gives you an idea of what I’m talking about. The map has maybe changed some since the addition of the hotel, located on the site of the top right water feature, and the LMH project, which is where the top left water feature was planned, but it gives you the general idea of the new road.

Don’t worry, though, the new road won’t require a new stoplight on that stretch. Instead, the planner working on the project for the Lawrence-Douglas County planning department told me the new entrance will be limited to a right-in, right out configuration.

I’m not sure the idea of a new road is the most popular idea with the development group, which is led by members of the Schwada and Fritzel families. The new road adds some upfront expense to the development. But perhaps the new road will spur more activity at Mercato, which is one of the only places in town that is zoned to accommodate new big-box development. As the map shows, it could house a lot of new retailers. The property, though, has been zoned for big-box retail for years, but has yet to attract its first retail tenant. The construction of Rock Chalk Park was expected to spur some retail development in the area. Thus far, it has produced a new hotel on the northeast corner of the site, but retail projects haven’t yet come.

The hospital development on the northwest corner also could spur more activity at the site. While an outpatient center may not be the most logical neighbor for a big-box retailer, the LMH development is bringing important utilities to the site, which could reduce the cost of development for future tenants. (Plus, if Costco brings a 7-pound tub of Nutella to Lawrence, I will need an outpatient center to surgically remove the shovel from my mouth.)

As for the prospect of a Costco coming to town, I have no great insight, but can share what I read in some retail trade publications. That information doesn’t indicate that Lawrence is on the list of expansion plans for Costco. The biggest thing I take away from the articles is that it is really hard to land a Costco because it is a company that only does a few store openings a year.

The trade publication Winsight Grocery Business reported in December that Costco would open 17 new stores in the U.S. in 2019. That’s up just a bit from the 13 that the company opened in 2018.

Costco has publicly identified one of the new locations: Coral Springs, Fla. Winsight reports, however, that a data company called Planned Grocery has listed 10 other markets that it believes Costco will move into in 2019. None of those are Lawrence. The closest such market is Oklahoma City. Planned Grocery also lists 19 other sites that are likely expansion targets for Costco through 2022. None of those are Lawrence either. If you are looking for some glimmer of hope, though, at least one of those 19 locations is a traditional college community, Athens, Ga. So, perhaps communities like Lawrence do fit the Costco model, but when you only add 15 stores or so a year, it may take a while to get to Lawrence’s spot on the list.

Despite all this, yes, I know some of you go to the Costco location in Johnson County and hear from employees there that a Costco is coming to Lawrence. It is not an exaggeration for me to say that I’ve been receiving those reports via Costco employees for multiple years. Some day, the law of averages suggests, those rumors will be true.