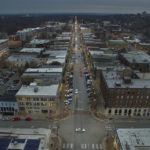 A view of Lawrence shows the Massachusetts Street and downtown on Monday, Dec. 12, 2016.

The Lawrence branch of the Colliers International commercial real estate firm has released its 2018 report measuring a variety of vacancy rates in Lawrence. There was some good news on the retail front, as vacancy rates fell slightly last year, but those gains were more than offset by a surge in vacancies in the office market. The vacancy rate of office space in Lawrence now is at its highest level since 2009.

Here’s a look at some of the numbers:

• The overall retail vacancy rate in Lawrence is 6.8 percent. That’s down from about 7.5 percent in 2017. However, Lawrence’s vacancy rate continues to be higher than Kansas City’s, which is at about 5.5 percent, and the U.S. average, which stands at about 4.5 percent. It has been unusual for Lawrence to have higher retail vacancy rates than Kansas City and the U.S. From 2007 to 2016, Lawrence’s vacancy rates were below those averages. However, 2018 marks the second year in a row that Lawrence has had higher-than-average vacancy rates in the retail sector. In total, Lawrence had 450,000 square feet of vacant retail space out of a total of about 6.6 million square feet.

• Downtown has the highest office vacancy rate in the city as office space in places like the former Journal-World press building and Allen Press properties continue to be vacant on both ends of Massachusetts Street. The vacancy rate was at 28.4 percent in downtown, up from about 20 percent a year ago. There was about 250,000 square feet of vacant office space in the downtown district in 2018, according to the report.

• The industrial vacancy rate increased to 3.2 percent, which was up from a record low of 1.9 percent. Lawrence industrial vacancy rates continue to be well below the vacancy rates of Kansas City and the U.S. average. Kansas City is at about 6.5 percent and the U.S. is at about 4.75 percent. Lawrence’s rate increased, in part, because the new 153,000-square-foot building by VanTrust Real Estate was completed in Lawrence’s Venture Park. The building was constructed on speculation, meaning it doesn’t yet have a tenant. Economic development leaders have said the rising vacancy rate is positive because 2017’s rate of 1.9 percent was an indication there was too little inventory to show prospective businesses. Even with the increase, Lawrence has only about 300,000 square feet of vacant industrial space out of about 9 million total square feet.