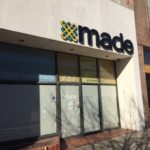 Made, at 737 Massachusetts St., has closed its doors after about seven years in business.

I don’t think anybody has ever wanted to buy anything I’ve made, unless you can count the neighbors who have offered to pay me to remove some of the creations out of my yard.

But plenty of handy people in Lawrence do sell their creations, and they’re losing a place to market their wares in downtown Lawrence.

The unique shop Made, at 737 Massachusetts St., has closed its doors after about seven years in business. When I wrote about its opening in 2011, I described the place as a bit of a brick-and-mortar Etsy store. If you are not familiar with Etsy, you almost certainly have fewer handmade doll head flower pots than most of us. Regardless, Etsy is an online site where people sell all types of crafts and other homemade creations.

Jennifer Richards — who owned the store with her husband, Matt — previously told me that she had been selling items on Etsy for years and wanted to bring that type of dynamic to downtown Lawrence. With a run of a little more than seven years, the shop lasted longer than many other retail ventures. As for why the couple decided to close the store, I’m unsure. I’ve got a call into them but haven’t heard back yet.

However, a message on the store’s Facebook page said the store closed for good on Dec. 31.

“We have loved being part of the Lawrence community and all the times we’ve shared together,” the couple wrote. “We will forever be grateful for your support of our little shop.”

No word on what, if anything, may be going into the storefront.

We may find out soon whether Kmart — and hence its Lawrence distribution center that employs a few hundred people — will become another victim of the changing retail world.

Friday was an important one for the employees of Sears Holding Company, which is the parent company of Kmart. The board of directors for Sears was expected to make some decisions Friday about how it wants to move through bankruptcy. While the company did not make any announcements Friday, we do know its board met, and we know what the big questions were: Does the board want to try to keep the company alive by maintaining a few hundred stores, or does it believe it needs to shutter all its stores and simply liquidate the company’s remaining assets?

The second option, of course, would mean that after the liquidation, there would be no need for a Kmart distribution center in Lawrence. That would be a blow to the local economy. In recent years, we’ve reported the center employs about 300 people, but I’m not sure what the current employee total is.

Sears — once the largest retailer in America — has interest from one buyer who wants to keep the company alive. A fund led by Eddie Lampert, the company’s largest shareholder and former CEO, has offered $4.4 billion to buy Sears and keep about 425 stores open. But creditors — folks who are owed money by Sears — aren’t thrilled with the offer. They note that it is not a $4.4 billion cash offer. A good amount of the value would involve Lampert forgiving Sears debt that is owed to his company. There are creditors who think they would fare better if Sears simply started auctioning off its inventory, real estate and other assets and used that money to pay creditors.

According to The Wall Street Journal, at least two groups have submitted offers to buy Sears, close all the stores and liquidate the assets. In addition, Lampert has submitted a back-up bid of $1.8 billion that would keep about 250 stores open. While specifics haven’t been disclosed, that would at least provide a chance for the Lawrence Kmart distribution center to remain open.

Sears’ board of directors had a deadline of 3 p.m. today to decide what path it would like to follow. We were hopeful that Sears would make an announcement, but as of Friday evening, the company had not.

It is possible that Sears won’t name a single bidder that it wants to work with, but rather will ask the court to hold an auction to determine the bidder. That auction would happen on Jan. 14. In any scenario, the bankruptcy court must approve the plan for Sears. At the end of the day, a judge controls the fate of the company.

How it will turn out is a matter of debate on Wall Street. According to an article in the Chicago Tribune today, some bankruptcy experts think Sears will try to keep its stores open. There is a thought that the banks behind the business don’t want to face the political fallout of cutting 50,000 jobs, which is what would happen if all the stores close. Plus, the Sears name is still kind of iconic.

“There is a lot of psychological momentum to keeping it alive,” Lawrence McMichael, a bankruptcy attorney at Dilworth Paxson in Philadelphia, told the Tribune. “It may be a retailer of yesteryear, but it’s still right up there. I find it hard to believe the lawyers in that case can’t find a way to keep that brand alive.”

“Their model is too far gone at this point to resuscitate,” he said.