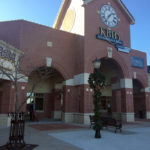 The Johnson County-based restaurant chain Twisted Fresh is planning to open a Lawrence location in the shopping center at the southwest corner of Sixth Street and Wakarusa Drive. The shop will be in suite 118A, between LADA Salon and Spa and Kitchen Bath and Home.

I know Johnson County SUVs that have a freezer and a deep-fat fryer, but there soon will be a Johnson County-based restaurant chain opening in Lawrence that brags about having neither. Twisted Fresh has signed a deal to locate in the shopping center at the southwest corner of Sixth Street and Wakarusa Drive.

As the name implies, fresh food is a hallmark of the menu. More specifically, wraps, tacos and a handful of sandwich selections are the main items at Twisted Fresh. But owner and founder Alan Rust said they are done a bit differently from typical restaurant food.

“It is a healthier version of everything,” said Rust, who started the business in 2010 with his wife, Barb. The Lawrence store will be the company’s fifth location but its first outside the Kansas City metro area.

Rust said he and Barb began eyeing Lawrence as an expansion opportunity shortly after their two daughters began attending KU. He said Lawrence’s health-conscious mindset appealed to him, and he thought a west Lawrence location would work particularly well.

“We’ve spent a lot of time in Lawrence over the last six years,” Rust said. “We looked at all the different restaurants on Mass. Street, but we were never too excited to do that because of the parking, and a lot of locals told us they avoided the area. But when something became available at Sixth and Wakarusa, we were very interested.”

As for what diners should expect once the restaurant opens, wraps are the biggest part of the menu, but the taco selections may be the most popular, Rust said. He said the restaurant’s Mahi Mahi tacos have a lot of fans. The fish is grilled with a cajun spice, has a spicy Thai slaw and is topped with Sriracha honey aioli, along with cheddar, pepper jack cheese and pico de gallo.

Chicken, beef and shrimp tacos also are available. The menu has about 10 varieties of wraps, including traditional offerings such as buffalo chicken, barbecue chicken and a gyro version. But more unusual offerings are also available, like a Kung Pao chicken wrap that includes a lot of Asian spices, cashews and pepper jack cheese.

All the wraps can be made into a salad, if you are looking to avoid a few calories, or can be turned into a quinoa bowl if you like food with more vowels than consonants. Keeping with the healthy theme (vowels are very healthy; hence their high price on “Wheel of Fortune”) the restaurant also offers a variety of side dishes, such as broccoli salad, cottage cheese and apples. Yes, it also offers chips and potato salad as well.

The menu includes several sandwiches, including a cajun version of a hamburger or a chicken sandwich. The restaurant plans to have a full liquor license, and Rust said he was still developing a menu for that part of the restaurant, but said a large selection of craft beers would be part of it.

“This will be our biggest location, so it will allow us to experiment a bit,” Rust said.

Renovation work is underway on the space, which is located in the corner of the shopping center near the clock tower with Kitchen Bath & Home and M Street Interiors. Rust said he hopes to have Twisted Fresh open in mid-February.