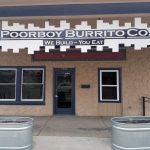 Poorboy Burrito Co. has opened for breakfast and hopes to begin serving lunch by March at its new location at 19th and Massachusetts streets.

On almost any given day, I tell myself that the workplace needs more mashed potatoes. (Yes, you really shouldn’t open my bottom file drawer.) A Lawrence company that has been bringing mashed potatoes and other delights to area offices is in expansion mode.

Poorboy Burrito Co. has opened at 19th and Massachusetts streets, marking the first restaurant location for the company that, up until now, has focused only on delivery. At this point, you may be wondering if the mashed potatoes have made my brain a little soft. We’re talking about a burrito company. What do mashed potatoes have to do with it?

Quite a lot, it seems. Mashed potatoes are the key ingredient in a line of breakfast burritos that Poorboy Burrito Co. has been delivering to area offices since the company’s inception three years ago. Sure, they also have scrambled eggs, cheese and choices of meats like bacon, sausage and other familiar fare.

“But the key is the mashed potatoes,” owner Nate Keller said, explaining that every breakfast burrito comes with a layer of potatoes that helps hold the cheese, eggs and other ingredients together. “Everybody thinks it is goofy, until they try it.”

The idea behind the new restaurant at 1900 Massachusetts St. — the small space where Hank Charcuterie used to be — is to make it easier for people to give the unique burritos a try. The company has never had an actual restaurant. Instead, it has always operated out of small commercial kitchens. It recently outgrew its latest space in west Lawrence, and took that as a sign that it was time to give the restaurant business a try.

The restaurant is open from 6 a.m. to 11 a.m. Monday through Friday and from 7 a.m. to 10 a.m. on Saturday mornings. The hours aren’t longer because, right now, breakfast burritos are all the business does. That is set to change, though. Keller said he’s working on a lunch menu, which he expects to begin in March.

Expect those to be nontraditional burritos as well. He said he’s working on a pulled pork burrito that has baked beans and coleslaw wrapped into the burrito. He’s also working on a brisket and macaroni and cheese combination burrito. Buffalo chicken with mac and cheese also is a possibility.

“Everybody wants something different, I think,” Keller said. “Everybody has had Chipotle or Qdoba or Taco Bell. They all do a Mexican-style burrito. We are going to do what I call an American bar-style burrito.”

Keller said he eventually does plan to have late-night hours for the bar crowd that may be exiting downtown via south Massachusetts Street. But, he said he was uncertain when that may begin, as he is still going through the challenging process of hiring enough staff to operate both the morning and lunchtime operations.

Poorboy also will continue to offer its delivery service to area businesses. Keller said he expects the delivery service to be a major part of the business. Keller has created a system where he has about five delivery routes that run on multiple days of the week. Instead of waiting for someone to call and place an order, Keller stops by multiple businesses that he has made arrangements with. He takes his hot cart through the offices and sells ready-made burritos to anybody who wants to purchase one. Keller said he regularly visits businesses — generally those with 50 or more employees — in the Lawrence, Topeka, Ottawa and Johnson County areas.

“It has been a good way for us to get started,” Keller said. “We have built a customer base. But now people are telling us they want to be able to drop by a restaurant, sit down and have a burrito in the morning. This opens us up to more people.”