From scandals to big buildings, a look at the top local stories of the decade 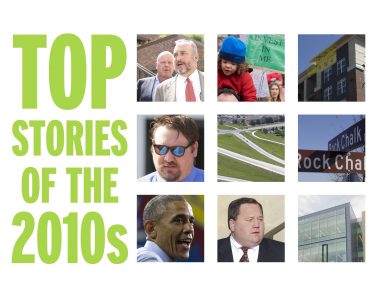 The national scene came to Lawrence during the past decade — at least for a day. Does anybody still remember Jan. 22, 2015 — the day when President Barack Obama became the first sitting president in more than 100 years to visit Lawrence?

It is OK if the day slipped your mind. That’s not the president everyone is thinking of currently, and in fairness, no one sent out a tweet to remind you.

But as the Journal-World looked back on its files from the last decade, Obama’s visit was one of the top stories of the past 10 years. For a brief moment, the national political stage was assembled in Lawrence.

But it also would be a stretch to say that was Lawrence’s hallmark moment of the past decade. What was that hallmark sign? Nationally, historians may need a moment to define this decade that is coming to a close. That’s probably true locally as well.

As we looked through old stories — we actually reviewed about 10 years worth of our annual compilations of top stories of the year — we didn’t come up with that answer. But we did find lots of stories, and many of them fell into one of three categories — scandals, projects and causes.

Here’s a look back on a few of the stories that caught our eye, and of course, feel free to share your own list in the comment section below.

• Kansas Athletics. There is no rule that says the KU athletic department has to start and end the decade embroiled in a scandal, but it did anyway. In 2010, the big story was a ticket scandal inside the athletic department. In total, seven Kansas Athletics officials were convicted in federal court as part of a $3 million-plus scheme that involved trading athletic tickets for cash and various favors.

To end the decade, KU is facing peril of a different type. Federal fraud trials involving representatives of Adidas produced evidence that some KU basketball recruits were paid to attend the school. T.J. Gassnola, a fixer employed by Adidas, admitted to making at least two sets of payments, and evidence at trial raised questions about how much KU coach Bill Self and his staff knew about Gassnola and his activities.

KU has denied wrongdoing, but the NCAA has formally accused KU of major rules violations. If KU is unsuccessful in appealing the NCAA’s findings, the violations could lead to a postseason ban and a major suspension for Self.

•Mayor Farmer. In 2015, Lawrence Mayor Jeremy Farmer oddly resigned his seat as executive director of the local food bank Just Food. At first, the explanation was just that he wanted to devote more time to his city duties. But it didn’t take long for word to leak that there were some unpaid taxes at the nonprofit that he had been leading. By 2016, Farmer had pleaded guilty to embezzling about $55,000 from the food bank. Farmer was sentenced to 10 months in federal prison and ordered to pay $81,000 in restitution. Farmer is now out of prison, and according to his LinkedIn profile, now lists himself as a “leadership coach” in Overland Park.

• Developer downfall. One of Lawrence’s most prominent developers and businessmen ends the decade facing prison time. Thomas Fritzel in July was found guilty of felony charges related to improperly disposing of asbestos materials as part of his work to remodel the former Alvamar Country Club that he bought. He faces up to seven years in prison and a fine of up to $500,000 in that case. But he also has been charged in a federal tax scheme involving sales tax issues related to The Oread hotel property he owns. Fritzel previously had pleaded not guilty in that case, but in December he notified the court that he planned to withdraw that plea. Fritzel faces up to 15 years in prison and hundreds of thousands of dollars in fines related to that case.

Fritzel dominated headlines for a good part of the decade for another project, Rock Chalk Park, which gets us to next part of our list …

• Rock Chalk Park. In 2014, the Lawrence community got a new sports complex that is expected to be a regional focal point for years to come. Rock Chalk Park includes a city-owned recreation center that features eight gymnasiums that often host youth sports tournaments, bringing in visitors from Kansas City, Topeka and elsewhere. The KU portion of the facility is designed to draw visitors from even farther away. In addition to new softball and soccer facilities for KU, the complex features one of the most high-tech outdoor running tracks in the country. The track and field stadium already has hosted major NCAA and Big 12 meets, and also hosted the 2017 USA Track & Field Junior Olympics.

The Rock Chalk Park project, though, was one of the flash points of the decade. It was created as part of a public-private partnership with Fritzel. Originally, the idea was sold to city officials as an act of philanthropy by Fritzel. His construction firm would build the recreation center at a price far below market value for the city. But when the public forced city commissioners to put the recreation center project out for competitive bidding, it turned out the center could be built for millions less than what Fritzel previously had projected. By the end of the project, an auditor had to be hired to review disputed charges by Fritzel. Ultimately, every city commissioner that voted for the project either lost a reelection bid or chose not to run again.

• The Trafficway. After more than 20 years of lawsuits, 2016 was the year motorists started driving on a completed South Lawrence Trafficway. Since 1996, the western leg of the bypass had been completed. But the eastern leg — that part from Iowa Street to Kansas Highway 10 east of town — was mired in environmental battles over whether the road should cut through the Haskell and Baker Wetlands. For years, the road was a symbol of everything wrong about Lawrence. Proponents of the road pointed to it as a symbol of how Lawrence argues about everything and accomplishes too little. Opponents of the road pointed to it as a symbol of how the community too easily sells its values for growth and development. Now, it is an ordinary bypass that cuts drive times between Kansas City, Lawrence and Topeka, and also has spurred new momentum along the south Iowa Street retail corridor.

• A taller downtown. This is the decade that big buildings became more the norm in downtown Lawrence. New Hampshire Street added four buildings of five stories or more during the decade. A group led by local businessmen Doug Compton and Mike Treanor was largely responsible for the boom in construction — which resulted in three multi-story apartment buildings and one hotel. (A revamped public library also was built on the other side of downtown.) But as a new decade begins, it is uncertain whether the trend will continue. City leaders rejected a plan by an out-of-state company to build a massive, multi-story retail and apartment building at 11th and Massachusetts streets, and a slow-moving City Hall planning process currently is attempting to chart a vision for what downtown will look like in the decades ahead.

• Central District. KU’s Lawrence campus looked much different at the end of the decade than at the beginning. Under the leadership of former chancellor Bernadette Gray-Little, KU undertook $350 million worth of construction on what has been dubbed the Central District. A focal point of the project is a 280,000-square-foot integrated science building that uses new high-tech methods to teach chemistry, physics and the biosciences. Also included in the project: a new Burge Union and new student apartments and residence halls.

The project has been touted as a key part of KU’s plan to be recognized as one of the nation’s top public research institutions. But the added expense to operate the facilities has created some financial strain on the university and played a role in Chancellor Douglas Girod’s decision to order $20 million in budget cuts at the Lawrence campus in 2018. Like many universities, KU also saw challenges on the enrollment front. Enrollment on the Lawrence campus is down about 1,500 students since 2010, and as Girod works on creating a new strategic plan for the university, he has said “a future KU may be a smaller KU, but a stronger KU.”

Lawrence is never short on causes that residents are fighting for. However, it normally takes some time to determine which ones have lasting impact. There are a couple — one near the beginning of the decade and one near the end — that caught our attention.

• Save Our Schools. In 2010, more than a thousand people marched through downtown Lawrence to protest the idea of closing several neighborhood elementary schools as part of a budget-cutting plan. Lawrence school board members largely backed off the idea, and instead decided to become a district that has smaller neighborhood schools rather than a handful of large elementary centers. By 2013, the district asked voters for $92.5 million worth of improvements to neighborhood schools, and voters gladly approved with about a 70% yes vote. Even today, the decision impacts how the school district grows and plans for the future.

• Mental health. In 2018, Douglas County commissioners got a sense of the compassion levels of area residents. They had watched a grassroots effort grow on the themes of social justice, and particularly a need for better mental health care in the community. Commissioners put an ambitious sales tax plan on a May ballot to fund a $44 million expansion of the Douglas County Jail and the creation of a new behavioral health campus. Voters rejected the plan after many activists expressed concern about the jail expansion. Commissioners then put a new plan on the November ballot that focused only on building the behavioral health campus, and voters approved the new quarter-cent sales tax for mental health with more than 70% of the vote. Meanwhile, a new tax for affordable housing also was approved by voters, and other social and environmental justice movements seem to gain momentum by the month.