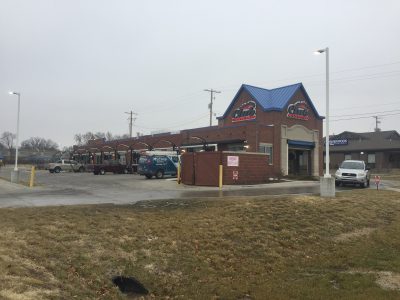 The company, which got started in 2006 in Columbia, now has 25 car washes in Missouri and Kansas. In Missouri, many of the locations are branded Tiger Express, but the company went with a different brand name as it decided to make a major push into Kansas. In recent months, the company has opened locations in Topeka, Hutchinson, Salina and Ottawa.

“We knew we wanted to get into Lawrence if we could,” said Patrick Spellman, regional manager for Club Car Wash. “There is more competition here, so we knew we needed to be smart about it.”

The Hurricane car wash business was on the market, and Club Car Wash approached the Tsunami owners about selling. After acquiring both businesses on Dec. 13, the company quickly began to install some upgrades to the tunnel car wash equipment at both locations. A big change was the addition of more drying equipment, Spellman said.

“Your car is going to be dryer,” he said.

Also expect to see more workers at the location. Perhaps the most notable change is that there will be actual humans at the entrance to the tunnel car wash, spraying down vehicles before the automated portion of the wash begins.

“We feel like that makes a big difference,” Spellman said.

As the name implies, the company’s business model revolves around selling monthly memberships to customers. Single car washes are available for purchase, but they are priced in a way that if you wash your car more than a couple times per month, it is cheaper to buy an unlimited monthly pass. Currently, the Club Car Wash is selling those for $10 a month, but that is an introductory rate. Spellman said regular pricing ranges from $25 to $30 per month, depending on the particular wash package.

Club Car Wash is just the latest sign of change in the local car wash industry. Several car washes across town have upgraded equipment, and Tommy’s Car Wash tore down the old Applebee’s building at Sixth Street and Monterey Way to make way for its first Lawrence location.

Other plans for tunnel car washes were announced but have since been scrapped. Zarco planned to build one near Ninth and Iowa streets but has since sold that site to QuikTrip, and an out-of-town company planned to build one at the site of the former Cadillac Ranch bar a couple blocks west of Sixth and Iowa streets. But that site is now back on the commercial real estate market.

Spellman said his company’s research suggested that Lawrence is big enough for three to four tunnel car wash locations, which means Lawrence is about at capacity. He said that’s one of the reasons his firm decided to buy instead of build.

“The economy has been better than it has been for a long time, and that is allowing more companies in this industry to expand easier than before,” Spellman said when asked why Lawrence’s car wash market has suddenly gotten so active. “And, Lawrence was an underserved market, in my opinion, until very recently. But that is starting to change.”