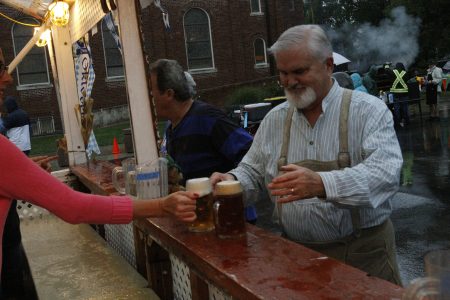 There has been talk in some circles that Lawrence is the beer capital of Kansas. Now, there is evidence that goes beyond the fact that the pile of discarded beer bottles in your garage is roughly the size of the Statehouse dome. A national website lists Lawrence as one of the 50 best beer cities in America.

The financial website SmartAsset has studied 350 cities across the U.S. to determine the “best cities for beer drinkers.” (Historically, I have taken it as a red flag anytime my financial adviser has tried to get me to drink more beer, but I’ll let you be the judge of what to make of this study.) Lawrence ranks as the 34th best place in America to drink some beer, according to the study. It was the only Kansas community to make the top 50 list.

The rankings, of course, are subjective, and being 34th best at something isn’t normally the type of accomplishment that causes you to hang up a banner anyway. But the study does look at some actual beer statistics for a lot of cities, and those are kind of interesting.

Lawrence is new to the list of top 50 communities, and it seems likely that the number of new craft breweries in the city played a big role in the higher ranking. The surge in brewery numbers in recent years has included Black Stag in downtown, Lawrence Beer Co. with both an East Lawrence and west Lawrence location, and Fields & Ivy on 23rd Street. Of course, Free State Brewing Company and 23rd Street Brewery are longtime craft brewers in Lawrence, with Yankee Tank Brewing kind of in between the new and old.

The surge has led some people to worry that the Lawrence beer market soon will get too crowded for its own good. The new entrants to the market, though, have said their research shows Lawrence can actually support several more breweries.

The report also looked at the average price for a pint of beer. Lawrence was tied for the second lowest average at $3.50. Only Grand Rapids, Mich., was cheaper on the list of top 50 towns, with an average price of $3.25.

If you want to get to a top 5 beer drinking town, you don’t have too far to go from Lawrence. St. Louis, home to Anheuser-Busch, is No. 2 on the list. Cincinnati is ranked No. 1 in the country. The report doesn’t really say why, other than the city ranked highly in all the metrics, which meant it had a wide variety of beer options at a reasonable price. Somewhat nearby, Denver almost made the top 5 at No. 6. You can see the full list here.

• While we are talking about beer, I thought it would be worth taking a quick look at some other liquor stats in Lawrence and the state. Kansas underwent a major change to its liquor laws this year.

In April, Kansas grocery and convenience stores were allowed to start selling full-strength beer for the first time. Previously, that was the sole domain of liquor stores, while grocery stores could sell a weaker beer product that had no more than 3.2% alcohol by volume.

With that change, I wondered if sales of full strength beer had exploded. Not exactly, although they are up. Since July, which is the beginning of the state’s fiscal year, numbers from the Kansas Department of Revenue show the per gallon tax charged by the state on all beer is up 8.7% from the same period a year ago. Sales of 3.2% beer are down about 41% compared with the same period a year ago.

While beer sales are up, it doesn’t appear that overall liquor consumption is in the state. The gallonage tax for all types of alcohol — beer, wine and spirits — is down statewide about 1.4%. Wine seems to be the product getting hit the hardest. The gallonage tax is down 9.3% for wine. Again, those are statewide numbers. Figures just for Lawrence or Douglas County weren’t immediately available.