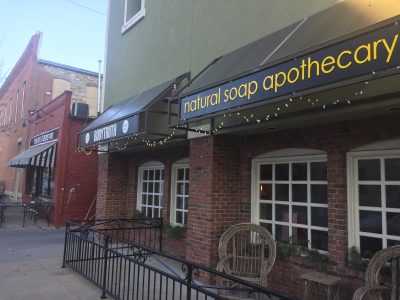 Bodytruth has opened in space on East Ninth Street between Massachusetts and New Hampshire streets. The store sells soap and other skin care products that it makes from its own recipes.

I can tell you from personal experience that if you get close enough to a pig, you gain greater appreciation for a bar of soap. So, maybe there is some symbolic synergy with the Bourgeois Pig’s new next-door neighbor in downtown Lawrence — a handmade soap company.

Bodytruth Soap Apothecary opened recently at 10 E. Ninth St. in the spot that used to house Z’s Divine Espresso before it moved to its location on Massachusetts Street. Founder and owner Stephanie Willis opened the shop with a simple philosophy.

“If your skin is happy, that makes you happy,” she said.

While her philosophy may be simple, the recipes for her soaps are not. They involve produce that you might find in your garden. In fact, having too much produce from a summer garden is what got Willis into the soap-making business. Back in Michigan, she ran a 1-acre community garden that produced more bounty than the community could eat.

“I didn’t want to waste produce, and I thought ‘how cool would it be to use some of this produce to make soaps,'” Willis recalls.

At this point, you may be as confounded as I am about what the heck soap is made of. If it is made out of vegetables, I wish I would have known that as a child. I would have had a much stronger argument for not eating my broccoli. Mom, I got plenty in the shower this morning.

Actually, broccoli doesn’t seem to be part of Willis’ recipe. Carrots, and sometimes cucumbers, play a big role. She explained that all soap recipes require liquid, which most often is water. But she often uses vegetable juices instead of water. The thinking is you get more healthy vitamins and oils into the soap by using vegetable juice rather than plain water.

In addition to vegetables, garden herbs also play a role. Rosemary particularly has a lot of soothing oils in it and is included in a lot of Bodytruth’s recipes. Lavender is another big one. Turmeric, fennel and some fruit juices also come into play. Natural clays and salts also are big parts of the soap-making process, she said.

All the products sold in the shop, except two, are made in Lawrence, Willis said. The shampoo and conditioners that the shop sells are made offsite, but are made solely for Bodytruth using the shop’s own recipe, she said. The shop also carries homemade shaving cream, beard oils and other moisturizing products. Most of the bars of soaps cost about $8, she said, while the shop carries other items ranging from about $5 to $30.

Willis began soap making in 2014, and started dabbling in sales at farmers markets and shows in 2015. But it wasn’t really a business venture in the beginning. For 20 years, Willis was a senior business analyst, who by her own description was an introvert and more comfortable behind the scenes. Now, she’s in the very people-oriented business of retail.

“This business allowed me to come out of my shell,” Willis said. “It has been a personal evolution. The business has grown along with its creator.”

Lawrence became the location for her first shop after she moved to the area to be near her son, who attends the University of Kansas. Her decision to take the leap and open a store surprised her some. She said she had thought about it previously but never thought she was ready. The feel of Lawrence’s downtown, though, changed her mind.

“I knew if I opened a shop, I wanted it to be in a place like Lawrence,” she said. “But I didn’t know Lawrence existed. I came here and fell in love with Lawrence.”

I’ve received word from the Gap about its last scheduled day of business. As we reported earlier this week, store closing signs are up in the retailer’s sole Lawrence location in the 600 block of Massachusetts Street. At the time, though, we didn’t have word of when the store would close for good.

Via email, Gap’s public relations division said that Jan. 26 would be the store’s last day. As we reported, the store’s closing is part of a plan announced by Gap in February to close 230 specialty stores over a two-year period.

“We are committed to quickly, thoughtfully, and decisively addressing stores that are underperforming or don’t fit our vision for the future of Gap,” the company said via its emailed statement. “We are confident these closures will strengthen the health of the specialty fleet moving forward and will serve as a more appropriate foundation for brand revitalization.”

According to a list provided by the company, Gap has closed about 50 stores already, so quite a few other communities are still to receive their news on the future of the Gap stores. According to the list, Lawrence is the first store in Kansas to be closed.