Lawrence’s overall economy shows growth in 2018, but there are fewer dollars than in many university towns 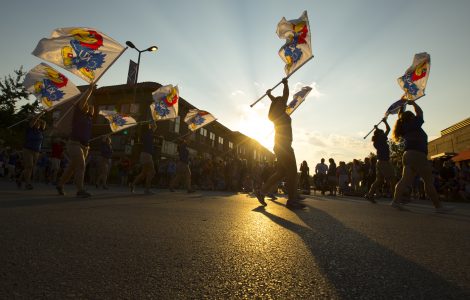 New figures from the federal government show Douglas County has a significantly smaller economy than many other counties that are dominated by major universities.

The U.S. Bureau of Economic Analysis released new figures Thursday that for the first time show the gross domestic product of every county in America. The numbers showed Douglas County turned in a kind of middle-of-the pack performance in Kansas.

The more interesting numbers, though, are when you start comparing Douglas County with other counties that also are home to a major university. You don’t need a federal report to know that the University of Kansas is the major driver of the Lawrence economy. But what this report shows is that, for whatever reason, the Lawrence economy hasn’t grown as large as those in other communities that have universities similar in size and scope to KU.

Here is a look at 15 other major university communities that share some similarities with KU and Lawrence, which could mean they are in counties roughly our size, share membership with KU in the prestigious Association of American Universities, or show up on many of the same lists that attempt to rank the great college communities of America.

The first number in the chart lists per capita GDP for the university’s home county. The per capita number is just a way of accounting for the fact that each community has a different population. Douglas County has a population of about 120,000, so it wouldn’t be fair to compare it with a county with a 200,000 population without some way to account for those differences. The second number is the total GDP in 2018. As a reminder, GDP basically just measures the value of all the goods and services produced and consumed in an economy. That accounts for people’s wages, companies’ earnings, retirees’ Social Security checks and much more.

A few things that stand out on that list:

• We’re not like the University of Missouri, and, for once, that is a bad thing. Boone County, Mo. — home to Columbia — has an economy that is more than 80% larger than Lawrence’s. KU and MU aren’t that much different in size. Yes, Columbia is more isolated than Lawrence — which can help keep more retail dollars in a community — and MU’s medical center also is located in the same town as the university, unlike KU Medical Center. But an 80% difference is stark. Maybe more stark is Morgantown, W.Va. It has an economy that is 40% larger than Lawrence’s, yet its county’s population has about 10,000 fewer people. Like MU, it has its medical center as part of its home campus.

• Not having the medical school in Lawrence does constrain the local economy some. But there are examples on this list of communities that have grown sizable without a university medical center. The closest is Iowa State. Story County has an economy about 8% larger than Douglas County’s, despite having a population that is about 25% smaller than Douglas County’s. The more striking community is Athens, Ga. The University of Georgia doesn’t have a medical center, yet its economy is about $2.5 billion larger than Lawrence’s, even though the two counties are pretty close in population.

• Chase that guy in the giant orange cowboy hat. (Unfortunately, that’s not the first time I’ve uttered that sentence in life.) Yes, we even are chasing Pistol Pete and his Stillwater crowd at Oklahoma State. For years, the main piece of trivia about Stillwater was that it was the smallest city in the Big 12 Conference. (It is not anymore. Morgantown is.) But in one respect, it has an economy bigger than Lawrence’s. Its per capita GDP is just above Lawrence’s. Per capita income can be an important measure because it provides a glimpse at productivity — how many people it takes to generate an economy of a certain size. Something in Stillwater has them more productive than us. (That’s impressive because every time I’ve worn a cowboy hat that large, I’ve spent a couple of hours a day stuck in doorways.)

• Manhattan has some economic worries. If you ever wonder why I highlight KU’s Lawrence enrollment numbers to the extent that I do, look at Manhattan. K-State enrollment has been on a decline, and so too has its overall economy. Riley County’s economy in 2018 actually was smaller than it was in 2015, according to the federal numbers. Its three-year growth rate was negative 0.4%. From about 2014 to 2018, enrollment declined by about 10%, according to published reports. Declining enrollment can be a tough hurdle for a university to overcome.

With that, let’s shift to numbers for the state of Kansas. This report marks the first time some of these counties have ever seen their GDP numbers. For years, the federal government provided the numbers only at the state and metropolitan area levels.

Here’s a look at the 10 largest economies in the state, with their total GDP and their one-year growth rates:

Both lists show that Johnson County continues to be the state’s behemoth, but Sedgwick County has been on a hotter growth streak of late. Geary County, home to Junction City and Fort Riley, is in the midst of tough times. Its GDP has dropped three straight years, shrinking 5.3% in 2016 alone.

If you are curious about Douglas County’s other neighbors, here is that list, with GDP total and one-year growth rate: