Gap to close its only Lawrence store; no word on last day of business 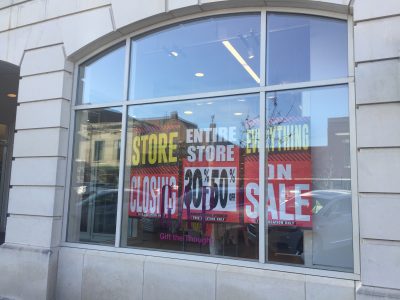 Get ready to say goodbye to the Gap location in Lawrence. The apparel store today placed “store closing” signs all over its windows on Massachusetts Street.

The closing likely will create a big gap in downtown Lawrence’s streetscape. Gap occupies about 100 feet of street frontage in the 600 block of Massachusetts Street. There has been no word yet of a new tenant to take over the double storefront, which houses both a traditional Gap and a Gap Kids store.

A store employee didn’t have a date to offer on when the store is scheduled to close for good. An attempt to reach a spokesperson in Gap’s corporate office also wasn’t immediately successful.

News of the pending closure went public on Tuesday, but the possibility certainly has been hanging around for a while. In February, the company announced that it would close 230 of its Gap stores during the next two years. It never released a list of specific stores, however. 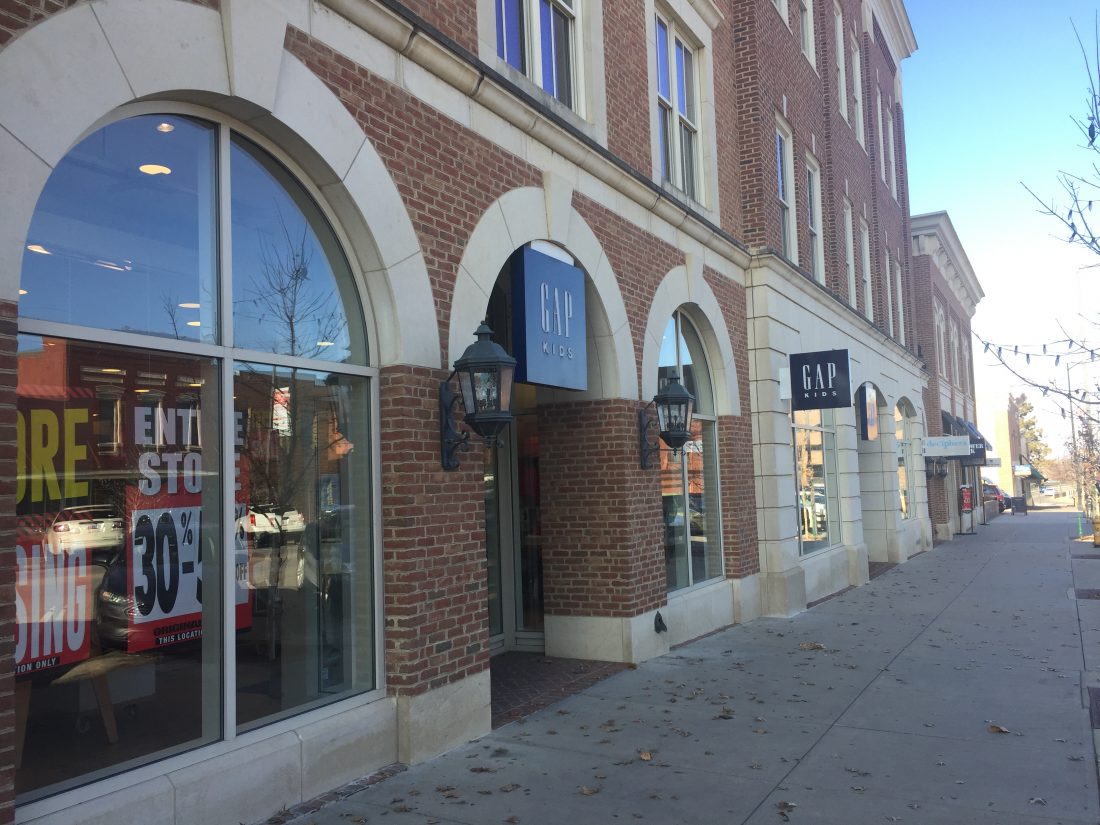 A large section of the 600 block of Massachusetts Street will be in need of a new tenant. Gap announced it was closing its lone Lawrence store, which occupies two large storefronts in the northern end of downtown Lawrence.

The company announced it was closing underperforming stores after the retailer posted a 5% decline in same-store sales during the 2018 holiday shopping season. Last month, the company delivered more bad news as its president and CEO abruptly resigned after third-quarter sales fell another 7%.

In announcing the store closings, Gap said it thought it would need fewer stores as it expected about 40% of all its sales to come through online purchases in the near future.

The downtown store, which opened more than a decade ago, is the only Gap store in Lawrence. The closest locations to Lawrence are a Gap Outlet store in the Legends shopping center in Kansas City, Kan., and multiple locations in Johnson County.

Gap’s parent company also owns Old Navy, which closed its Lawrence store in early 2012. Old Navy closed its location — it was where Ross Dress for Less is located at 3234 Iowa St. — as part of a plan to operate smaller-footprint stores. There’s been much speculation in commercial real estate markets that Old Navy wants to return to the Lawrence market, but no new plans have developed. The last bit of speculation centered on Old Navy being part of a new shopping center proposed for the Iowa Street and South Lawrence Trafficway interchange. Plans for that shopping center, however, still must win City Commission approval before they can move forward. The last update I received on the project was that developers were still trying to win some approvals from the Kansas Department of Transportation on how the shopping center would take its access off U.S. Highway 59/Iowa Street.

In September, Old Navy announced plans to open 800 stores as part of corporate restructuring that will have it split away from Gap and create its own company. However, those plans also have been questioned recently, as sales fell 4% at Old Navy during the third quarter.

I’ll let you know if I hear a definite closing date for The Gap or any word on tenants for the space.

People are still trying to figure out what to call this decade that just ended. It wasn’t exactly the teens, it ...