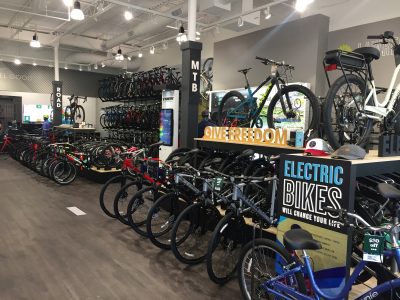 Trek has opened a store in the shopping center at 25th and Iowa streets.

Lawrence’s cycling community soon may have more pedal-power behind it now that the big-time bike manufacturer Trek has opened a corporate-owned store on south Iowa Street.

We reported months ago that Trek had signed a deal to locate in the shopping center at 25th and Iowa streets, just a couple doors down from the Planet Fitness facility. Well, the store has opened in recent weeks.

While the store is up and operating with bikes ranging from “family fun” bikes for riding around town to versions of mountain bikes ridden by professional racers, the store is still getting going in one key area: community outreach. Expect the store to use its corporate backing to boost the number of rides, races and amount of prize money available to area cyclists.

“They just want to get more people on bicycles,” Garrett Grow, the store’s service manager, said of Trek and its decision to open in Lawrence. “That is what it is all about. We are going to do a lot to help cycling grow here through support and education. We’re just getting our feet wet right now.” 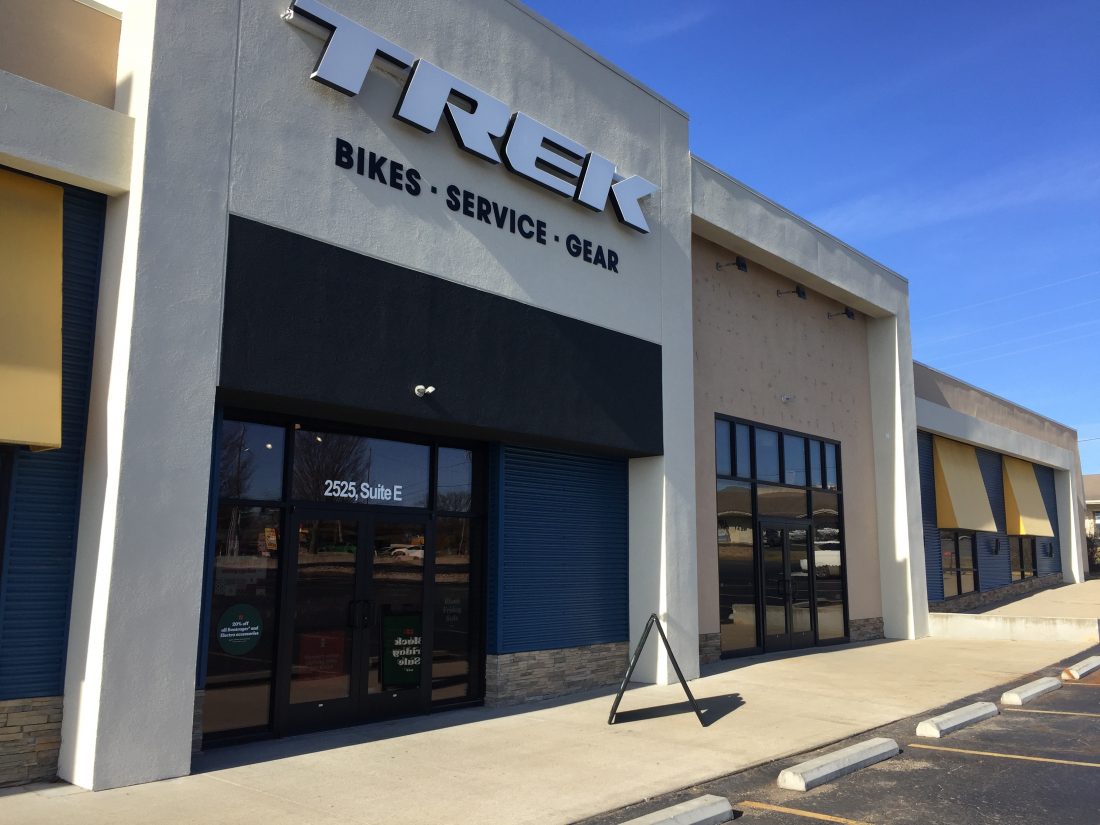 The new Trek store is at 2525 Iowa St., in the shopping center that includes Planet Fitness, Office Depot and several other retailers.

Wisconsin-based Trek has been making a variety of bicycles since the 1970s and has a sales network throughout North America, Europe and Asia. The company gained particular notoriety in the 1990s as Trek became the supplier for Lance Armstrong as he dominated the Tour de France, before being stripped of his titles because of doping violations. The company continues to sponsor professional riders across the globe and has been involved in a number of bike-friendly initiatives. Grow said he would expect those types of efforts to reach down to the local level.

The Lawrence store stocks a variety of the different styles Trek manufactures, Grow said. That includes mountain bikes, gravel bikes, road bikes and electric-powered bikes. In addition, the store has a service department that completes most repairs in under 24 hours, Grow said. The shop also has an accessories department that includes gear such as helmets, outerwear, shoes, bike locks, air pumps, water bottles and other items.

The Lawrence location is one of a few Trek-owned bike stores in Kansas. The company operates one in Shawnee, while also having another on the Missouri side of the state line in Lee’s Summit. Grow said the Lawrence store was expected to attract a lot of out-of-town shoppers who love the Trek brand.

Grow didn’t get in to many details about why Trek decided on Lawrence as a location for a corporate store, other than the city has a good reputation in cycling circles. But the decision has created ripple effects in other parts of the city’s cycling market.

Lawrence-based Sunflower Outdoor & Bike Shop had been a Trek dealer for about 30 years, owner Dan Hughes said on Monday. With the opening of the corporate store, though, Sunflower no longer is a Trek dealer, although it still sells multiple other brands of bikes.

Hughes said Trek officials opened the Lawrence store after Trek had asked Sunflower to commit to doing at least 80% of all its bike sales under the Trek brand. Hughes said that while he was a fan of the Trek brand, he wasn’t willing to restructure the philosophy of Sunflower to meet those terms.

“Our business model at Sunflower is predicated on choice,” Hughes said. “We pride ourselves on going out and picking the products that serve our customers best. Sometimes that is a Trek product, but sometimes it is a different brand. We didn’t want to give that up.”