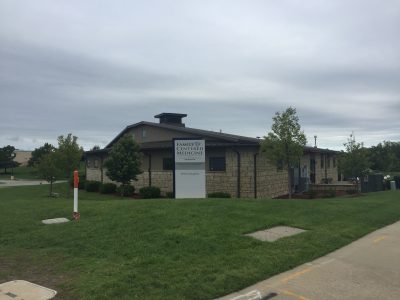 We are becoming a world of scans. We scan everything from our shopper cards to get a discount to our fingerprints to get into our smartphones. But lots of people are betting that the real scanning revolution will be in health care. Think of the day when we scan our whole body to get advanced warning of cancer or other ailments. A new Lawrence business has opened that aims to tap into that future demand, while also reducing wait times for some medical procedures in the here and now.

Advanced Medical Imaging has opened in west Lawrence just north of Sixth Street and Wakarusa Drive in the building that also houses Family Centered Medicine. Dr. Stephanie Suber runs both of those practices and serves as medical director for both operations.

Advanced Medical Imaging’s main services are MRIs and CT scans. Andy Suber, Dr. Suber’s husband and business partner, said AMI was the first stand-alone imaging center in Lawrence open to the public. LMH Health, of course, has the scanning equipment and does MRIs and CT scans both for hospital patients and for patients who have been referred there by other physicians. Andy Suber said some private practices in town had imaging equipment but they typically weren’t open to the general public.

At AMI, people basically can walk in off the street and get a scan. You might wonder why you would want to, though. Usually an MRI or a CT scan is only done on the order of a doctor. They check for everything from tumors to internal bleeding to bone and muscle issues.

Those types of physician referral tests are the biggest part of AMI’s business currently. But the business is also offering scans that are more preventive in nature. The equipment can be used to do a coronary calcium scan that can give useful information to people worried about heart disease. The scan takes cross-sectional images of the vessels that supply blood to the heart. The scans can detect plaque buildup in those vessels.

The second type of preventive scan is a low-dose CT scan that is used to check for abnormal areas in the lungs. It can detect early warning signs of lung cancer, according to information provided by AMI.

Andy Suber acknowledged that insurance is probably not going to pay for either scan if it wasn’t ordered by a doctor, but he said the costs to patients typically are only $65 for a scan. The scans generally only take about 15 minutes.

It is an example of how scanning is getting more accessible. He expects it to become a bigger part of the industry in the future.

“We really want to offer scans where patients have more proactive control of their health care,” he said.

The game-changer, he predicts, will be the advancement of artificial intelligence in computers. He said the scanning technology already existed to do efficient full-body scans that could detect a variety of ailments or warning signs. The difficult part is having enough human expertise to review the scans and spot the issues. But as computers begin to learn from humans, he said, the process of reviewing the thousands of pieces that make up a full-body scan will become much quicker and more efficient.

“I think that is what is on the horizon,” he said. “Machines will learn from the radiologists.”

Until that day comes, though, a lot of what is driving the idea of stand-alone imaging centers — many have popped up in the Kansas City market and other metro areas — is the idea of competition.

Patients have become more tuned in to what certain procedures cost now that many people have deductible health insurance that often has them paying for the first $5,000 worth of medical costs. As more options become available in an area, costs generally go down, along with wait times.

Andy Suber said trying to offer less-expensive scans certainly was part of the business strategy. But he said he thought some patients also would prefer coming to more of a family doctor’s office setting for their scans rather than going to a hospital that can have a lot more hustle and bustle.

As for wait times, he said since AMI hasn’t yet reached capacity, it often can get patients in on the same day that they call. He said he thought the business was starting to have an impact in the Lawrence health care market.

“The biggest impact we’ve seen is the relief we see when people realize they don’t have to sacrifice so much to get the scan that they need,” Suber said. “There are some people who maybe would have put off getting a scan and wouldn’t have gotten it in time.”