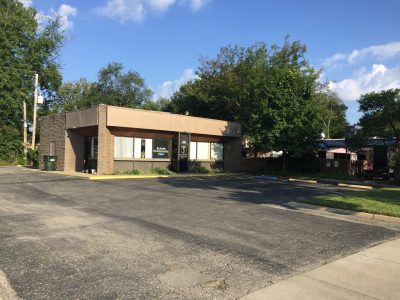 The Bap Stop, a food truck that serves Korean rice bowls, has filed plans to locate in the corner of the parking lot at Scholle Chiropractic at 1807 Massachusetts St.

There are times I’ve had a meal where a chiropractic adjustment would be welcome afterward. (An all-you-can-eat buffet plate can get pretty heavy.) I don’t think that is the intention behind a new Lawrence food truck business, but, nonetheless, plans call for it to set up permanent shop in the parking lot of a chiropractor’s office.

Plans have been filed at City Hall for a food truck — actually a pull-behind trailer — to regularly be located in the parking lot of Scholle Chiropractic near 19th and Massachusetts streets. Emily Henry is the Lawrence businesswoman behind the idea, and she’s got a couple of reasons for thinking a chiropractor’s office is a good place for a food truck. Dr. Vince Scholle is her father, and his office has plenty of parking and good visibility just across from the Dillons grocery store.

Plus, Henry is eager to bring her version of cooking to Lawrence. The food truck will be named The Bap Stop. Bap is Korean for rice, and the main menu item Henry will serve is Korean-style rice bowls.

“I just love all the different flavors,” Henry said of the rice bowls. “It is hearty but not so heavy that you feel like you are going to die after eating it.”

In addition to the rice, the bowls all come with a variety of add-in ingredients. Based on a few festivals and other events Henry has done thus far, the most popular are a marinated rib-eye steak and a spicy pork belly.

“The rib-eye is salty and a little sweet and tangy,” Henry said. “It is kind of like a teriyaki but not quite.”

And a pork belly, of course, is the cut of meat from which bacon comes. So, the Korean version has some of those bacon characteristics but with more heat.

“I thought the rib-eye would be our most popular offering because it is a really easy transition into Korean food, but the pork belly has been every bit as popular,” Henry said.

There will be other options to add to the rice as well, including vegetarian offerings. Thus far, a fried tofu is on the menu. Every rice bowl also comes with pickled vegetables. Those include pickled cucumber, carrots, radishes and homemade kimchi, which traditionally is a mixture of cabbage, ginger, scallions and seasonings.

But one of the highlights of the dish, Henry said, is every bowl is topped with a fried egg.

Each dish also is topped with miso, which is a savory, fermented soybean-based sauced.

Other menu offerings are likely to include kimchi pancakes and gluten-free meat-filled dumplings, Henry said.

The gluten-free offerings are important because that is a big reason Henry started cooking her own Korean food. Henry is half Korean, she said, and grew up eating a variety of Korean dishes. But it wasn’t until about 10 years ago that she became intolerant of gluten. Soy sauce is full of gluten, as are many other Korean dishes. Not wanting to give Korean food up, she began working on making dishes that were gluten-free and also free of MSG, which also can be problematic.

Henry thinks having a gluten-free menu will be a selling point for her food truck but also thinks people will like the grab-and-go nature of the rice bowls. The site plan filed with the city, though, does seek to have a seating area for customers as well. Plans call for a tentlike structure to occupy part of the parking lot when the truck is in operation, which will provide some shaded seating.

The city’s planning office is reviewing the plans now, but Henry isn’t sure when she may open the business. She’s hoping for a fall opening, but it may be delayed until spring. She expects to receive her new food trailer from a California builder in the next couple of weeks, but she’s uncertain when she will win the necessary city approvals. She is also not sure that she wants to start the business during the winter, although she hasn’t ruled out that possibility.