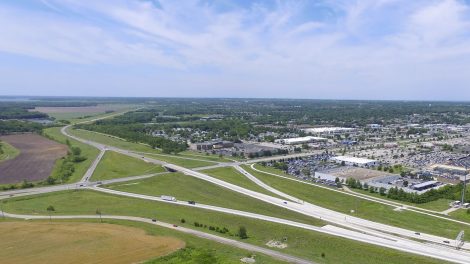 The idea of a big shopping center at the Iowa Street and South Lawrence Trafficway interchange isn’t dead after all.

If you remember, we reported last month that there was speculation the out-of-state development group that has proposed the shopping center at the southeast corner of the intersection had given up on the idea. That speculation was fueled by the fact the developers unexpectedly dismissed a lawsuit against the city, which had denied a previous version of the shopping center plans.

That lawsuit generally was seen as a useful piece of leverage for the developers as they tried to get a new version of the shopping center approved at City Hall.

But it is becoming clearer by the day that we don’t all understand sophisticated negotiating tactics. (My plan for ending the trade war involves highly flattering messages inside fortune cookies delivered to the White House.)

I still don’t have a good explanation for why the developers dropped the lawsuit, but one of the executives with the development team did recently confirm that the project is still an active one.

“We are still under contract to purchase the property,” Chris Challis, a manager of the project, said.

That’s good news for folks who want more retail and restaurant development in town, but potentially bad news for those who think the project is too big of an expansion of the south Iowa Street corridor and will place development too close to the Wakarusa River.

If you have forgotten, the proposal would build one of the largest shopping centers in Lawrence. It would be bigger than the Pine Ridge Plaza development that houses Kohl’s, Bed Bath & Beyond, World Market and other retailers.

The latest plans call for about 600,000 square feet, which would be enough room for at least eight major retailers and many more smaller ones, at least a half dozen restaurants, a hotel and a large convenience store. At one point, the developers said they had letters of intent from Academy Sports and Outdoors, Fresh Market, HomeGoods and Old Navy to locate there. That was more than two years ago, and HomeGoods has already located elsewhere in Lawrence, but the others have not. Other brands that the developers have floated in the past have included Designer Shoe Warehouse, Off Broadway Shoes and Barnes & Noble bookstore.

Challis this time did not throw any names around. It is unclear to me how many of the retailers that were interested in the project when it first was filed back in 2014 are still interested today. That is a lot of time that has passed, and the retail market has changed. Challis only would say that his development group continues to hear the right things from retailers.

“Lawrence continues to be a market that is underserved,” Challis said. “There are retailers not in the market who would like to be there.”

As for the dismissal of the lawsuit against the city, Challis didn’t elaborate on the thinking behind that. The city has confirmed the dismissal wasn’t part of any negotiated settlement with the developer.

Rather, I got the sense there has been some reshuffling in the development group. A source had indicated that to me earlier, and Challis did confirm that he is now with Oklahoma-based Sooner Investment rather than North Carolina-based Collett real estate. But Challis downplayed that change. He said Sooner long has been a partner in the project, and has worked with Collett on other projects around the country. A source has told me another party also has become a partner in the project, bringing new investment to the table, but I haven’t gotten confirmation on that.

Regardless, there seems to be genuine interest on the part of developers to move ahead with the project. Whether the current crop of Lawrence city commissioners is interested in approving it is uncertain. The project has a major hurdle before it even gets to that stage. It must first go through the Lawrence-Douglas County Planning Commission.

Back in October it looked like the project was on track for a hearing by the Planning Commission. The news then was that the Kansas Department of Transportation had signed off on a traffic plan to get motorists off and on U.S. Highway 59, which is also Iowa Street. An interim plan called for a new traffic signal to be installed about 300 feet south of the current stoplight that serves the interchange. The new stoplight would be at the entrance to the shopping center.

A longer-term plan would involve a major reconfiguration of the entire Iowa Street interchange at the time the western leg of the SLT is made into a four-lane freeway. Such an expansion would be years away, and is dependent on funding from the state.

Challis said the long-term access plans for the area still have support, but the interim plan appears to be drawing some questions and concerns.

Challis said the developers hope to see some progress on getting the plan approved this fall or winter. It seems almost certain that it won’t be this current City Commission that deals with this project. Remember, elections are in November. Challis also said his group had not yet had detailed discussions with new city manager Craig Owens, but hopes to do so in the near future.