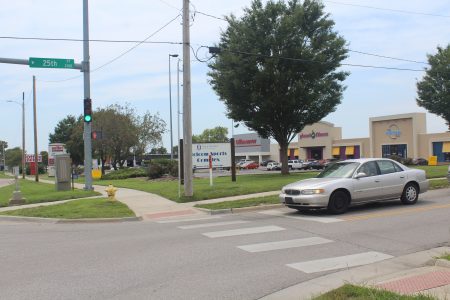 Plans have been filed at City Hall for a dental office to be built near the corner of 25th and Iowa streets. A dental practice that involves the national group Pacific Dental plans to build a standalone building in the parking lot of the shopping center that includes Planet Fitness, Office Depot and other retailers.

I know I certainly could use a million-dollar smile — heck even a $25 one — to help pay for some of the bills that I compile at south Iowa Street retailers. Maybe we all will be in luck. A second major dental franchise has filed plans to locate on the south Iowa corridor.

Plans have been filed for a 3,000 square-foot building to be constructed at the corner of 25th and Iowa streets in the parking lot of the shopping center that includes Planet Fitness, Office Depot and other retailers.

A representative with the development confirmed to me that the national group Pacific Dental has signed a deal for the new building. Pacific Dental isn’t exactly a national dental office chain. Rather, it is kind of a franchise company for dentists, according to information on the company’s website.

A dentist continues to own the practice, but Pacific Dental does all the administrative, marketing and other back-office work for the practice. Details of who will operate the Lawrence practice haven’t been released yet.

But this is the second dentist deal to happen near south Iowa Street this year. As we reported in February, Aspen Dental has signed a deal to locate just west of 31st and Iowa streets on property next to Central National Bank. Construction work is well underway on that dental office. Aspen Dental looks a bit more like a true national chain, although offices are owned by individual dentists. But it uses the Aspen brand name at all of its locations.

“South Iowa Street is hot,” said Christian Ablah, a broker with Wichita-based Classic Real Estate, who is part of the development group of the 25th and Iowa shopping center. “South Iowa is where people want to be right now. Between 23rd Street and the expressway is where retailers and restaurants say they really want to locate.”

The area has seen an uptick in retail interest since the opening of the eastern leg of the South Lawrence Trafficway in late 2016. The trafficway makes it easier for a larger number of people to get to the south Iowa shopping district. The increased traffic makes more retailers want to locate there. That is easy enough to understand. But sometimes less understood is that the greater number of retailers also causes more retailers to want to be there. It creates a synergy.

Ablah said his development group was pleased to have a dental office going into the space, even though that isn’t the type of traditional retailer you think of for a shopping center on Iowa Street.

“They are a great traffic generator,” Ablah said. “They are going to be a great fit for the center.”

The center has been on a bit of a roll lately. Mattress Hub moved from 23rd Street to the 25th and Iowa center earlier year. But the news that has created more of a buzz is that Trek, the manufacturer of road and mountain bikes, is opening a corporate store in the center.

Ablah said work on the space was coming along well. He said the development group hoped to turn the space over to Trek soon, which could put the store on track to open in six to eight weeks.

The center has another 12,000 square feet of retail space in its main building that could accommodate one to two additional retailers, Ablah said. The development also has room for one more outparcel building. Ablah said there was a space a bit south of the 25th and Iowa intersection — it would be more in front of the Office Depot location — that could house a standalone commercial building. He said the development group had been fielding interest from restaurants. He didn’t provide any names, but that is the type of location that could bring a new fast-food player to town.