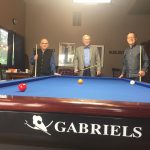 Stanley Lombardo, from left, John Hampton and Jim Regan have joined forces to create The Billiards Studio at 745 New Hampshire St. The members-only club features the pocketless 10-foot carom billiards table and also has a century-old pocket billiards table for members. A snooker table also may be added to the club's offerings, depending on the interest level from new members.

A pool table without pockets sounds a bit like that closet I built without a door. (The worst mistake was building it from the inside out.) But this pool table is no mistake. In fact, a trio of local residents think it may be a calling card for a unique new business: a private billiards club.

The Billiards Studio has opened in downtown Lawrence in a building at Eighth and New Hampshire streets that houses a branch of Bank Midwest. If you are having a hard time picturing the location, the building at 745 New Hampshire St. also houses E Barn Farm Market & Bakery, and before that it housed the Sandbar sub shop. The Billiards Studio is occupying a portion of the building that formerly housed a staffing agency.

But some of you may be having a harder time picturing a pool table without pockets. More accurately, the big 10-foot table is called a carom table or a billiards table. It is used to play a game called three-cushion billiards. The game involves three balls. A player hits one of the balls, which must hit three rails of the table while also touching the other two balls on the table. Every time that trick happens, the player gets a point.

“It is a quieter game than pool,” said Stanley Lombardo, one of the three founders of The Billiards Studio. “There are only three balls and no pockets, and there is something about the ball going around the table taking its time to hit the other balls.”

The game is popular in many overseas locations and used to be very popular in America in the early to mid-1900s. But the popularity of the game has faded in America, as has traditional pocket billiards, aka pool.

Lombardo, who is a retired KU professor with a world-renowned reputation as a translator of classical literature, joined forces with longtime Lawrence attorney John Hampton and local real estate agent Jim Regan to form the unique business.

In addition to the carom table, the club also has a traditional 8-foot pool table. The club also has access to a snooker table — a game extremely popular in Britain that involves many balls on a 10-foot table that has smaller pockets and smaller balls than a traditional pool table. It will add that table to its offerings if future members show an interest in the game.

The trio recognized that there are plenty of places to play pool in Lawrence, but nearly all of them are bars. That is problematic for a couple of reasons, they said.

“The problem has been all the pocket billiards has moved to bars, and the bar is the most important part of the operation,” Hampton said. “The tables really are secondary.”

The Billiards Studio features high quality tables that will be frequently recovered with new felt and leveled. For example, the club flew in from New Hampshire one of the top “table mechanics” in the world to set up the carom table, which is a monster of a piece. In addition to the table weighing 4,000 pounds, it also is a heated table. The heated slate bed controls the amount of humidity in the wool-based felt that covers the table’s playing surface. Different humidity levels in the felt can cause the balls to roll at different speeds.

Hampton said the idea behind the club is for it to become a place where the game is taken with a bit more seriousness than in most bars, and where a community of aficionados can gather.

“We want it be a bit of a haven for the game,” Hampton said.

Unlike bars, the club will make none of its money off the sale of food or alcohol. Instead, its revenue will come from monthly membership fees. Currently, it is offering two types of memberships: a prime membership that gives members full access to the club and its computer-based reservation system; and an affiliate membership that gives the individual a chance to play anytime a table is not reserved by a prime member. Both types of members are given key cards to gain access into the club and to the tables.

The club won’t be staffed by an employee on a regular basis, but club members will host regularly scheduled open play times where many members will gather to play one another, participate in club tournaments or simply watch professional pool matches on the club’s TV. The club also will host some days where members of the general public can play on the tables.

“One thing we want people to understand is this isn’t just for the top players,” Hampton said. “We would love to have them, but this is for beginners too.”

Helping beginners learn the game is part of the mission of the club. Lombardo calls himself an “apostle” of the three-cushion billiards game. The game has long created an “intellectual” connection for Lombardo, who has ended up developing relationships with some of the best players in the world. He said he loves that there is always something new to learn in the game, and he enjoys the calm drama that comes with watching a slowly rolling ball inch toward its final target.

“It is a Zen-like game,” said Lombardo, who actually is writing a book about the game. “It has a quiet elegance to it.”

People interested in joining the club can get more information from 1 to 4 p.m. at the club on Saturday, or can request information via email at info@thebilliardsstudio.com