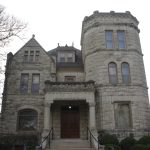 Passersby soon will see a “for lease” sign in front of the historic Castle Tea Room building on south Massachusetts Street. Yes, it also is a sign that the future of one of Lawrence’s more distinctive buildings is uncertain.

The nonprofit foundation that owns the Castle Tea Room, 1307 Massachusetts St., has fallen into disarray. A Douglas County Court judge has appointed a custodian — a position similar to a trustee — to try to fix the financial difficulties of the nonprofit. That process involves trying to find a new tenant for the building and may require the more drastic step of actually selling the late 1800s structure.

“That is not where I’m at right now,” Wint Winter Jr., a longtime Lawrence attorney who has been appointed custodian of the property, said of a potential sale. “But you can imagine that if we can’t get a stable source of revenue that pays the expenses, that might be where we end up at.”

The property is a landmark in Lawrence, in part, because it really does look like a castle. It was built in 1894 by Lawrence businessman John Roberts, who was of Scottish descent and evidently always wanted his own castle. Thanks to a manufacturing company that made millions of berry baskets, he was able to afford one.

Later the Castle became a restaurant and tea room run by Libby Kriz-Fiorito. Before she died in 2004, she created a foundation to own the building and left a substantial amount of cash to fund the maintenance of the building, which is listed on the National Register of Historic Places.

The nonprofit foundation, the Libuse Kriz-Fiorito Historical Foundation, has fallen on hard financial times, Winter said. Despite having no debt on the building, the foundation has been unable to keep up with basic operating expenses, such as utilities and maintenance. Its efforts to run an events business in the building also have added to the group’s expenses and haven’t generated enough revenue to cover the cost of operating and maintaining the building.

Winter, who also is a longtime banker, said it became clear to him that the events business was never going to be successful at the building, at least not enough to cover the expenses of the building. The building lacks the large banquet-style room that has become popular for wedding receptions and other events.

Winter said he’s now hoping to find an office user — maybe a lawyer’s office that wants to be close to the courthouse, for example — to rent the space. While the layout isn’t traditional for an office setup, the historic and distinctive nature of the building will give any business an immediate calling card to stand out in the crowd, he said. Winter, though, said he is open to other ideas on how to use the property. Any project likely is going to have to receive some planning approvals from the city, as the property is operating under a special use permit that mainly is limited to the events business.

But what about the large amount of cash that Kriz-Fiorito left the foundation to maintain the building? Winter said Kriz-Fiorito left approximately $4 million to the foundation, but said a large portion of it was spent by a previous board to fund a major renovation that was completed in 2009. While the renovation added a lot of luster to the wood-laden interior and dramatic limestone exterior, it also created some difficulties in converting the building to another use.

Winter said he found that out when he started exploring what seems like the most obvious use of the building: a bed and breakfast. The renovation removed the full kitchen from the house and replaced it with a lesser workspace that could be used by caterers bringing food into the building. The renovation also removed all the showers from the building, and many of the closets are no longer functional because they are filled with heating and cooling infrastructure.

He said he’s also talked with the Watkins Museum of History about whether the building could function well as a museum. The consensus was any such effort likely would require a significant amount of funding from the county or some other government entity, which probably would be hard to come by.

As we’ve previously reported, a new organization called Launch Lawrence has been hoping to use the Castle for its base of operations. Launch Lawrence is designed to be a place where area entrepreneurs can get training and other assistance to start their new businesses in Douglas County. Winter said he’s been working with that group for about four months on creating a lease for the space. The group, though, hasn’t been able to come up with the resources to sign a lease for the property. Winter said he’s still willing to work with Launch Lawrence, and the group is still working on the effort, but Winter said it was time to put the property on the commercial real estate market.

For now the property only will be listed for lease. He said everyone understands that the wishes of Kriz-Fiorito were for the building to be owned by a nonprofit trust and used in a way that would maintain its historic importance and be accessible to the public.

If circumstances dictate that the building needs to be sold in order to save it from decay and vacancy, Winter said the District Court would have to approve the sale.

Winter was appointed by the court after the remaining board members realized the foundation was no longer functioning as intended. The trust still had about $400,000 in cash, Winter said, but monthly expenses were reducing that amount on a regular basis. Also troubling was that the foundation was unsuccessful in recruiting new members to serve on its operating board. The board is supposed to have five members, but only had three members, which put it in violation of its rules of operation.

Winter currently is optimistic that a sale of the building won’t be required, but he also is making sure people understand it is a possibility.

“It kind of goes without saying that the appointment of a custodian is a very tangible signal that the future of the property is in question,” he said.

Winter expects a for-lease sign to be placed in front of the property later this week. He said he understood it could take some time to find a feasible tenant.

“But we are going to give it a heck of a shot,” he said. “I’m still excited about the future and will try very hard to maintain the spirit of what Libby had in mind for this great building.”