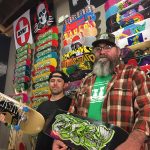 Maybe I’ll do a melon-grab when I’m on the half-pipe. All right, I confess, I don’t know what any of that means — and probably shouldn’t guess — because I can’t speak skater lingo. Whenever I get on a skateboard it’s not words, but numbers — like the type on my insurance card — that take precedence. But there are plenty who do speak the language, and they once again have their own store in Lawrence.

River Rat Skate Shop has opened in North Lawrence just north of the railroad overpass. It is in the 608 N. Second St. building, which it shares with Happy Shirt Printing Co. The two businesses also share an owner, Justin Shiney, who also is an avid skateboarder. He said Lawrence had been without a skate shop for about two years when he decided to open River Rat.

“I honestly kept expecting someone to open one up,” Shiney said. “I wasn’t quite prepared to do it, but I did it anyway.”

The shop slowly got started in December, but only recently has started to hit high gear, Shiney said. It carries about 15 brands of skateboards, including an in-house brand dubbed River Rat. The River Rat boards are blanks that Shiney buys from a manufacturer, but the local shop customizes them with their in-house designed and printed graphics. There are a lot of those types of synergies in the business. Decorating skateboards with graphics is a big part of the sport, and as a screen printer, Happy Shirt can do all of that work.

“The graphics of skateboarding is what got me into T-shirt printing to begin with,” Shiney said. 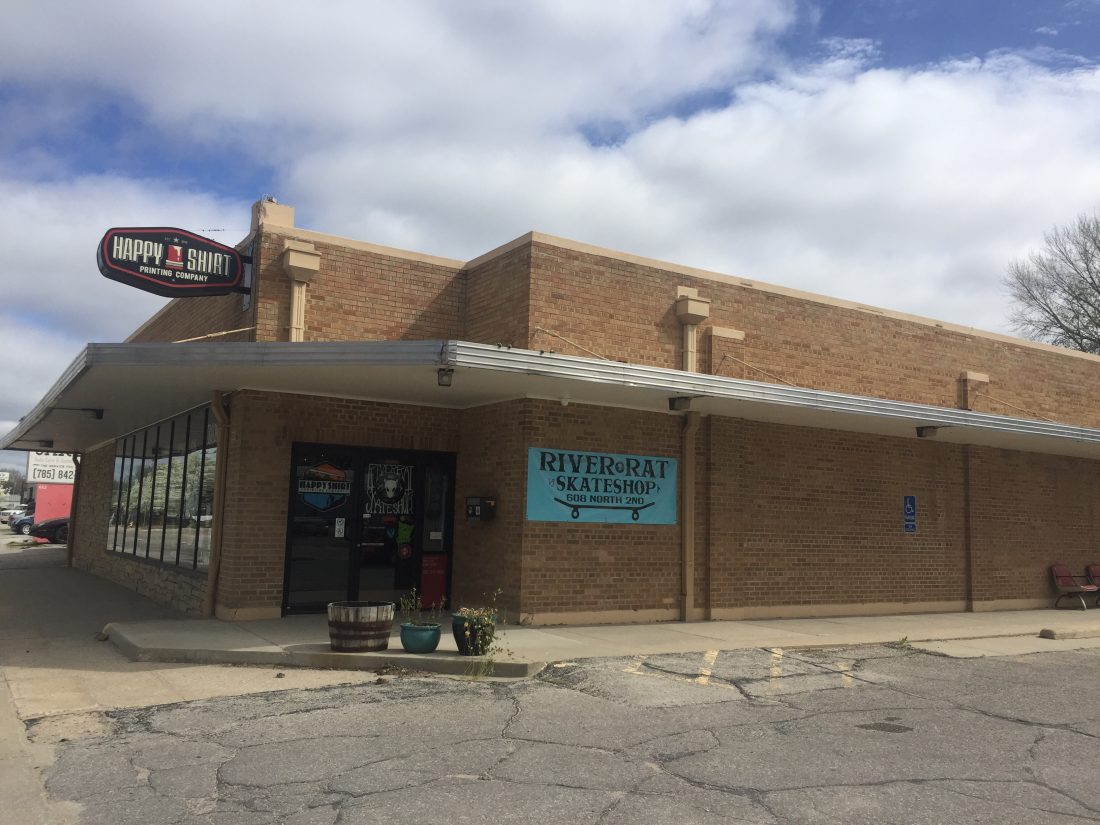 River Rat Skate Shop shares space, and an owner, with Happy Shirt Printing Co. at 608 North Second St., which is just north of the railroad overpass in North Lawrence.

Skateboarding was Shiney’s first love, and continues to be a big one. At 38-years old, he said he continues to skate every week.

“Skateboarding here is huge,” Shiney said of the Lawrence scene. “And it is noticeably bigger than it has ever been.”

The skateboarding community actually is in the process of building a skatepark in Edgewood Park in eastern Lawrence to go along with the large park at Centennial and smaller parks at Holcom and Deerfield.

He said he still sees kids getting started at 5 or 6 years old and many adults stick with it. Part of it is the adrenaline of doing a jump or a trick on the board and part of it is the creativity of coming up with new tricks. The sport also creates some real bonding opportunities, he said.

“It is a worldwide culture now,” Shiney said. “You can go anywhere and bond with other skateboarders.”

As for the store, Shiney hopes it becomes a hub for local aficionados. In addition to the boards, the shop also sells all the other necessary hardware, such as wheels and bearings, plus lots of accessories ranging from helmets to T-shirts to a range of pads and guards. But the store plans to take on a major product expansion this summer when it starts carrying skateboard shoes.

“We are growing into it fast,” Shiney said of the shop’s offerings.

Another longtime skateboarder is managing the shop. John “Nish” Niswonger previously owned Let It Ride Skate Shop in downtown Lawrence for about 10 years before it closed in 2004. He said the shop is letting him rekindle his love of skating and share it with a new generation. For Shiney, he’s been skating since he was 7 years old, and owning a shop has been a dream from nearly that point on.

While a few skate shops have closed in Lawrence over the years, Shiney said he thinks the sport has cemented itself in the city. It may get a boost too when it becomes an official sport in the summer Olympics for the first time in 2020.

“It is here to stay, and it is a really good, cheap outlet for kids,” he said. 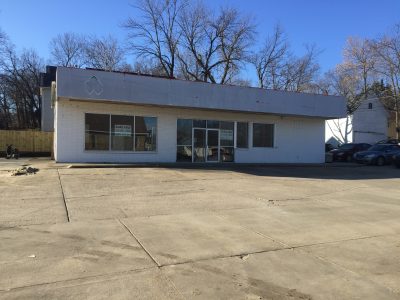