How one possible bankruptcy could cost Douglas County governments $550,000 in tax revenues 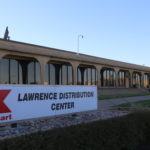 It is the approximately $550,000 Kmart question. Yes, that would be one blinding Blue Light Special. Don’t expect any savings to come from this question, though. The $550,000 is how much local governments may be out in tax revenue if Kmart’s parent company files for bankruptcy, which some analysts say is looking more likely all the time.

At this point, I’ve maybe confused some of you. No, Lawrence doesn’t have a Kmart store, but Kmart does operate a large distribution center along the Kansas Turnpike, just north of the McDonald Drive interchange.

Others of you may just be confused about what a Kmart is. There is a whole generation of people who didn’t understand the Blue Light Special reference above because they have never been in a Kmart store and don’t remember the days when Kmart was a leader in the discount retail industry. There was a time when Kmart could see Walmart in its rearview mirror.

Today, it is not likely that Kmart owns a rearview mirror. It is more of a moped in the retail industry now. It is owned by an iconic name, though. Sears Holding Company owns Kmart and the remaining Sears stores. Being owned by the one-time premier retailer in America, though, doesn’t guarantee profits.

Sears Holding Company hasn’t turned an annual profit since 2010. The company’s most recent quarterly financial results, which were released earlier this month, didn’t have much good news in them. Sears Holdings reported a net loss of $508 million in the second quarter, which was up from a loss of $250 million in the same quarter a year earlier. Total revenues checked in at $3.2 billion during the second quarter compared with $4.3 billion a year earlier. Much of the decline in revenue can be attributed to a continued string of store closings. But, the bad news for Sears/Kmart is that among the stores that remained open, sales totals continued to drop. Same store sales totals declined 3.9 percent during the quarter.

But the more recent news came on Monday. ESL Investments — the hedge fund that owns the majority of Sears stock — made a filing with the Securities and Exchange Commission that several analysts have labeled as a last-ditch effort to avoid bankruptcy.

The plan basically is for Sears to sell as much of its real estate as possible during the next 12 months, with the goal of reducing debt by $1.5 billion. Another $1.75 billion possibly could be reaped by selling Sears’ Kenmore brand of appliances and other assets. Another part of the plan calls for about $1.1 billion worth of debt to be refinanced in a way that wouldn’t require the company to make cash interest payments. Instead, the debt eventually would be converted into Sears Holding stock. Sears Holding stock this week hit a new low of $1.07 per share. If bond holders don’t like the sound of that deal, they could cash in their bonds for 25 cents on the dollar.

Some analysts think the proposal has little chance of success. Motley Fool senior retail analyst Adam Levine-Weinberg notes that falling sales are even more of a problem than debt for Sears.

“Yet the proposal ignores the fact that Sears Holdings has been burning cash at an astounding rate in recent years,” he wrote in a Tuesday article. “In fiscal 2017, the company burned through $1.9 billion. Cash interest expense only accounted for $412 million of that cash outflow.” As a reminder, Sears lost $508 million in the second quarter alone.

Levine-Weinberg said he thinks it is now possible Sears could file for bankruptcy before the end of the year.

More important than the Motley Fool’s opinion is that of the credit rating agencies. Fitch Ratings said it viewed the latest Sears proposal as “challenging to execute.”

Analysts, though, have been saying for quite awhile that Sears is going to file for bankruptcy, yet it continues to find a way to avoid that fate. At some point, though, it appears these analysts may be like the guy who lives every day like it is his last — at some point, he’ll be right. CNBC reports that Sears is working with the investment bank Lazard, which recently managed the Toys R Us liquidation.

If bankruptcy does come, what does it mean to Lawrence? The first impact would be the loss of jobs. It is tough to know how many people actually work at the Kmart distribution center these days, but the company previously has reported about 320 employees.

An impact that is easier to gauge is tax revenue. The Kmart properties paid just more than $552,000 in property taxes in 2017. The company has about 100 acres in industrially zoned property at the West Lawrence interchange on the Kansas Turnpike. It includes what is probably the largest industrially zoned building in the county. Most of those tax dollars stay here locally. A small slice goes to the state of Kansas, but most go to the school district, the city and the county.

If the company goes bankrupt, there would be a real question about whether those taxes would continue to be paid in the future. The ownership records show two parcels of property out there. One lists only Kmart Corp. as its owner, while the other — the one with the big building — lists two owners. One appears to be a Kmart entity, while the other is a trust held by John F. and David E. Anderson. So, maybe there would be someone left to pay the property taxes, or maybe not.

The other possibility is that the Kmart distribution site gets involved in the real estate sell-off of Sears. That might not be all bad for Lawrence. That would open the door to the property finding a new tenant. We’ve seen how redevelopment in the retail world can be positive. Look at the old Sears store at 27th and Iowa streets. It is now home to Dick’s Sporting Goods and a variety of other retailers. It is generating far more sales tax revenue for the city than it did in its final years as a Sears. The same is even more true for the old Kmart building. It now houses Bed Bath & Beyond, Michaels and World Market. It went from being a Kmart to one of the more active shopping centers in Lawrence.

Can the same thing happen with a distribution center?