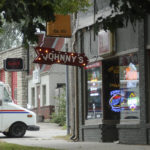 Johnny's Tavern, right, and Gaslight Gardens, left, at the intersection of North 2nd and Locust streets in North Lawrence are pictured in this file photo from October 2008.

There are new plans for multistory buildings with nearly 400 apartments and condos to overlook the Kansas River, and the iconic North Lawrence bar Johnny’s Tavern would get a bit of a facelift too.

Indeed, dreams of Lawrence’s own riverfront development are back in vogue.

A group that owns the property including and around Johnny’s Tavern at North Second and Locust streets has filed new plans at City Hall that would construct a series of buildings tall enough to peek above the Kansas River levee and create a new row of riverside dining and living options.

Don’t expect to have your margarita on the river anytime soon, though. (Unless you have figured out how to keep your kayak steadier than mine.) The development plans filed with city officials indicate the development would have to be done in phases, and the biggest buildings closest to the river would come near the end of the project.

Still, the plans are dramatic. They include a pair of nine-story apartment and retail buildings, a six-story mixed-use building and a 150-room hotel that may be taller than any of them.

Just look at this small sketch that was included in the plans sent to City Hall. It gives you an idea of how significant the development could one day become. For reference, the small building just left of center is the existing Johnny’s Tavern. The gray-scaled buildings are the ones closest to the river that would be part of later phases.

There are a multitude of business owners involved in the project — which is dubbed North Mass — including Johnny’s Tavern owner Rick Renfro and local property developer Jon Davis. Lawrence-based architect Paul Werner is the designer of the project.

Renfro told me that he expects the earliest any development would happen is a year from now, but said it could be longer. He noted that the development group has been working on plans for about a decade. He thinks the wait could be worth it, though.

“One of the lessons I’ve learned in life is, it takes a long time to do stuff,” Renfro said. “It doesn’t just pop up, but the vision for this one is big. It utilizes the river and includes a boardwalk that the whole community could enjoy.”

That boardwalk concept would come by incorporating the existing Kansas River levee trail with a host of buildings that would be built along the river. But, again, those buildings would be in later phases. In terms of what would happen in Phase 1, here’s a look at what the plans say about that.

• A five-story building that would be constructed along North Second Street, just north of Johnny’s Tavern. The building would have 90 apartments with a total of 200 bedrooms. They would be located on floors two through five of the building. The ground floor would have space for some small office and retail. A basement level would have parking. If you are confused about the location of this proposed building, it basically is between Johnny’s and the railroad overpass that crosses North Second Street. Currently there’s a small grain elevator, a shop building and two houses on the property, all of which would be demolished.

• A three-story addition atop the old stone retail building that is the first one you see when you cross the Kansas River bridge coming out of downtown. Plans call for 24 one-bedroom apartments in the three new floors. The existing stone building — which houses Third-Eye Sadie’s and a circus school — will remain and continue to be retail uses.

• A new addition would be added onto Johnny’s Tavern. It would replace the 1988 addition that is on the north end of the old stone tavern building. The new addition would include a new dining area, pizza kitchen and about a 900-square-foot covered patio. 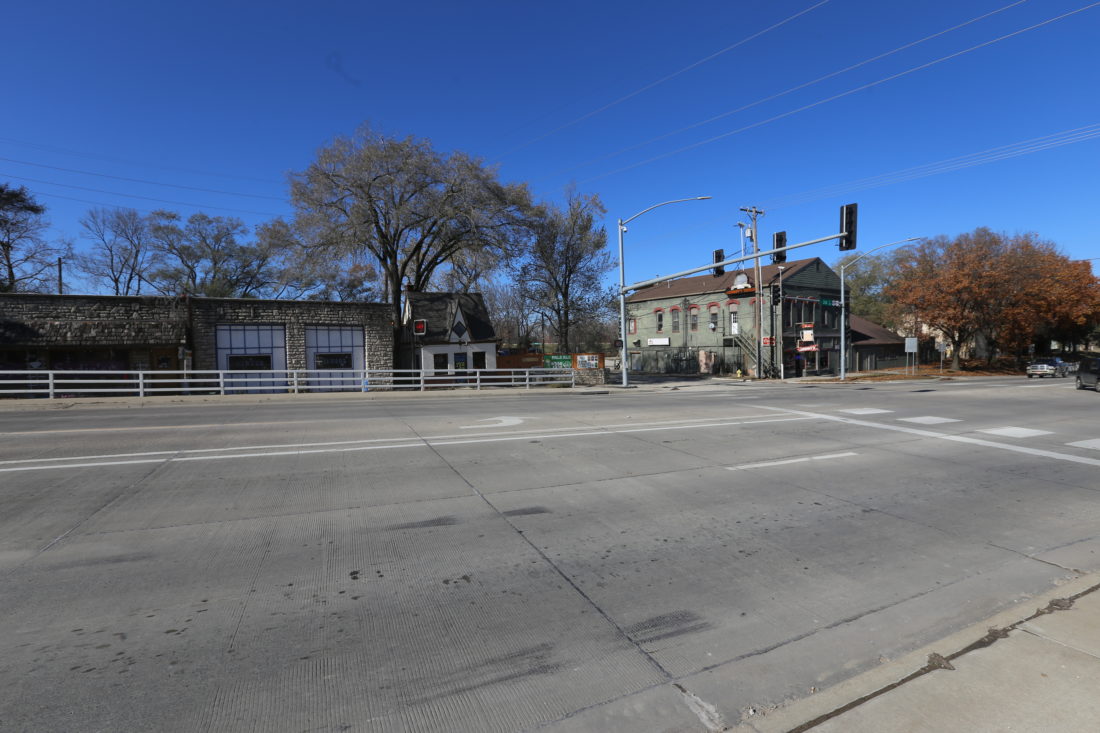 Plans call for new multistory buildings to be built along North Second Street. A three-story addition would be added to the stone building on the far left. A five-story building would be constructed north of Johnny’s tavern, near where the tree on the far right is located. The small Gaslight Tavern building in the center of the picture would remain in its current form, according to the plans filed at City Hall.

Those are the three buildings developers will focus on in the near term, according to the plans. There is one other midterm project, listed on the plans:

• A six-story building with bar and restaurant space, offices and apartments would be built near the Kansas River levee, on the portion of the property that is closest to the Kansas River bridge. It would include one level of covered parking and four levels of apartments. It is planned for what the development calls Phase 2 of the project.

The remaining buildings are planned for Phases 3-5, according to the plans. They include:

• A nine-story building that would be constructed near the Kansas River levee, just upstream of the proposed six-story building. It would include bar and restaurant space, offices, apartments and condos. Plans call for 90 apartments and 30 condos with a total of 240 bedrooms. The building would include two levels of covered parking. This building is listed as Phase 3 of the project.

• A large building with at least seven stories of hotel rooms and additional levels for covered parking would be built farther upstream along the levee. The hotel would have 150 rooms. It is listed as Phase 5 of the project. 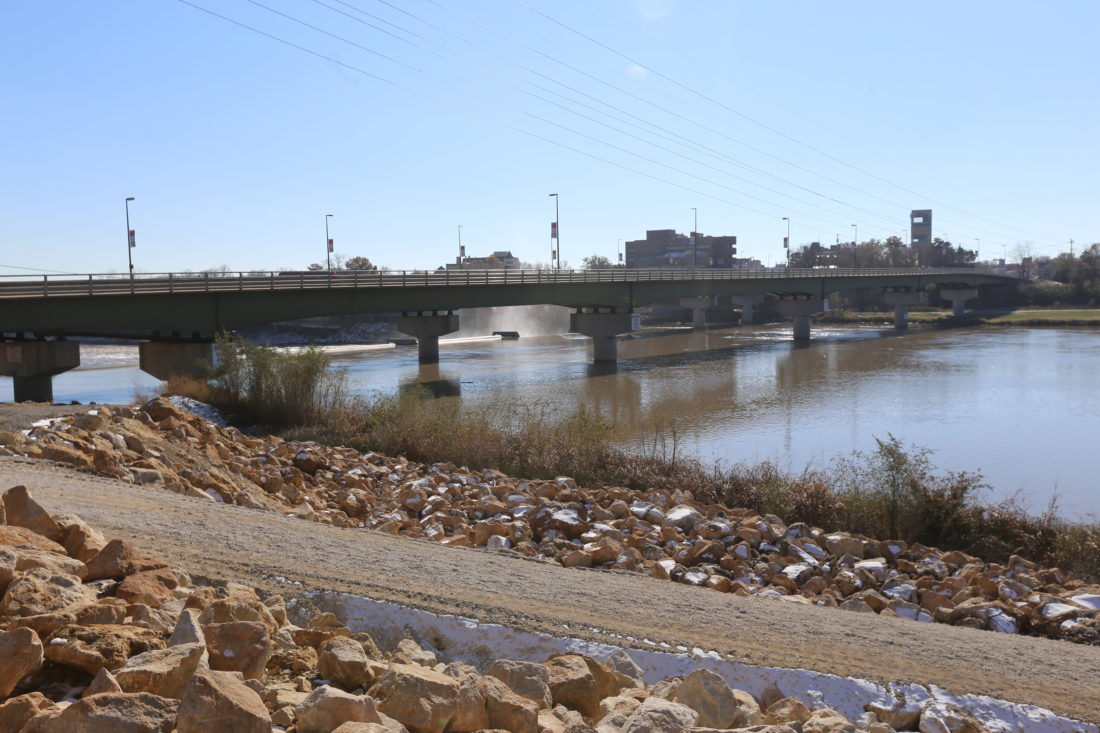 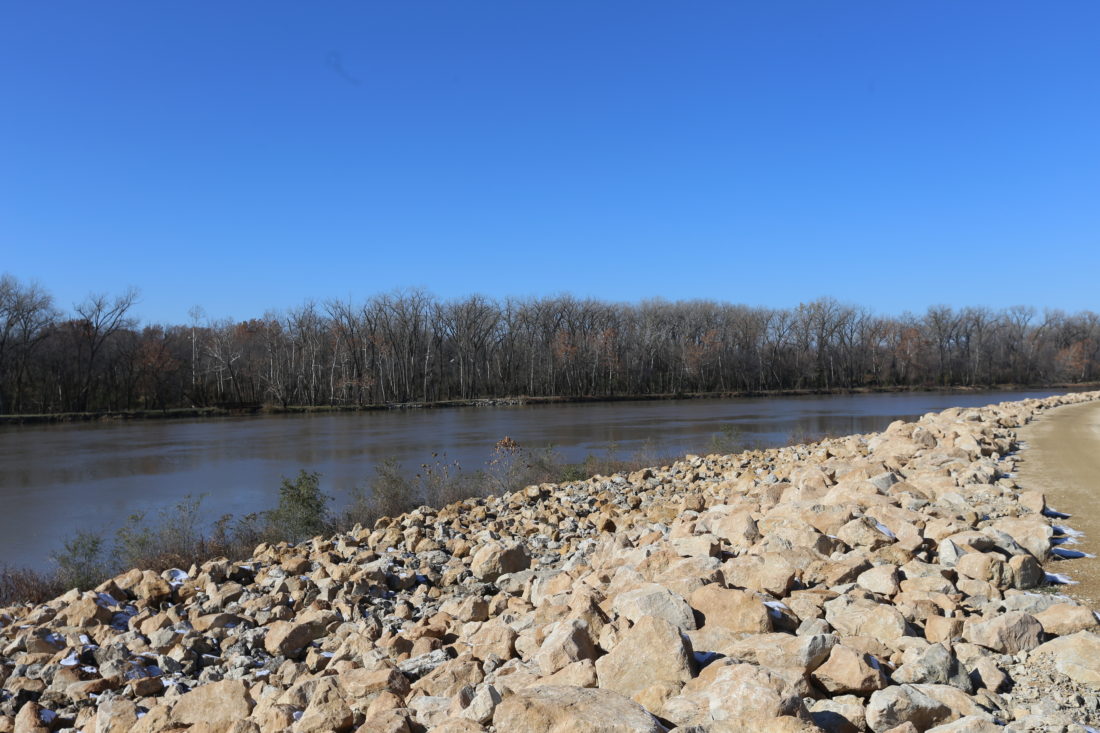 The project will need a lot of approvals from Lawrence City Hall, including from both the Planning Commission, the City Commission and probably the Historic Resources Commission. I also don’t know what, if any, incentives the developers may be seeking.

As Renfro noted, ideas for a major development along the river have been brewing for years. We’ve reported on other plans filed by the group in past years. Some of those had more of a retail component, including plans for a movie theater. This development seems to be focused more on the urban living trend.

It will be a project worth monitoring. For what it is worth, don’t expect the Johnny’s improvements to happen unless the larger project moves forward. Renfro, who is now in his 40th year of owning the historic tavern, said the area needs an economic boost.

“I’ve struggled for a long time whether I would just sell this property and let someone else try it,” Renfro said. “But I like working at Johnny’s and would like to be the caretaker for a bit longer.” 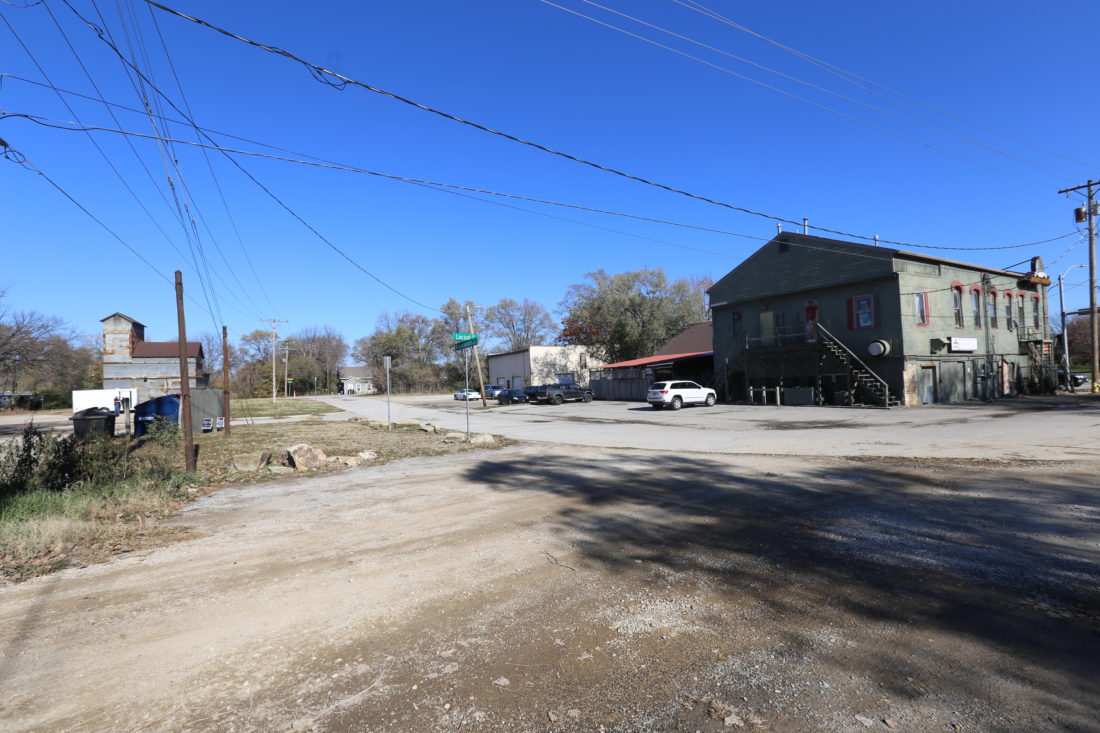 Plans call for multiple new buildings in the area near Johnny’s Tavern at North Second and Locust streets. The tavern building, the green structure, would remain but many of the other buildings would be torn down. Those include the grain elevator and the beige shop building and the home shown in the picture.

Lawrence is getting a climbing gym, and downtown may be getting a nearly 50-foot tower as part of it