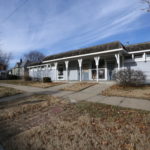 The Lawrence Community Shelter was formerly located at 10th and Kentucky streets. A nonprofit group now is proposing to use the building as a drop-in center for the homeless.

Plans have been filed with Lawrence City Hall to convert a downtown building into a drop-in center where the homeless can do everything from take a shower to get some temporary relief from the elements.

City commissioners will have to approve the plans before they can move ahead, and it is unclear whether the proposal will bring up a new round of debates that surrounded the homeless and their presence in downtown earlier this decade.

It would be the first homeless center in downtown since the Lawrence Community Shelter moved from downtown Lawrence in late 2012 to its new shelter building near the Douglas County Jail in eastern Lawrence.

The new drop-in center actually would be in the former home of the Lawrence Community Shelter at 944 Kentucky St. The plan was filed at City Hall by the former director of the Lawrence Community Shelter Loring Henderson. He filed it on behalf of the nonprofit Coalition for Homeless Concerns. Henderson said he would be the manager of the facility and would seek to run it with volunteers.

“I’m just trying to do something that I think will help the community, both the overall community and the homeless community,” Henderson said.

When the shelter was at 944 Kentucky St., it was the subject of multiple complaints and concerns by neighbors and downtown businesses. It remains to be seen whether the drop-in center — which would be different from the shelter in that there would be no overnight housing provided — will spark concern from the downtown community.

Sally Zogry, director of Downtown Lawrence Inc., said she was not sure what her organization’s membership would think of the proposal. While the shelter has moved to the far eastern edge of Lawrence, downtown still has a significant number of people who panhandle on Massachusetts Street. When the shelter was located in downtown, business owners often said they believed the presence of the shelter attracted more panhandlers to downtown, although some advocates for the homeless said some panhandlers were being mistakenly identified as homeless.

“Maybe some of the behavior that goes on downtown will happen over (at the drop-in center,)” Zogry said. “If that is the case it would be good that it wouldn’t be happening on every corner of downtown. Or, maybe a center like this just attracts more.

“I am glad for the humanitarian aspect of this, though. I think everyone is glad about that.”

Henderson said he expects some opposition to the plan, but doesn’t believe it will draw more homeless people to downtown.

“I expect some strong opposition, more from residential neighbors than business neighbors,” Henderson said. “But who knows? We’ll just see when we get into it. I have talked to a couple of good-sized businesses, and they think it is a good idea.

“I think it will take people off the street. It won’t draw more people downtown.”

Henderson said that LINK, the nonprofit meal program that provides free meals four days per week in the First Christian Church at 10th and Kentucky, continues to be the main draw for the homeless to come downtown. That will continue to be the case with or without a drop-in center, he said.

As for what the center will include, Henderson said plans call for two living room areas, two bathrooms with handicapped-accessible showers and, perhaps, a small laundry area.

Henderson said plans call for the center to be open seven days per week and to be staffed by at least two volunteers at all times. He’s currently contemplating hours to be from 2:30 p.m. to 6:30 p.m.

“It is just intended to be a refuge,” Henderson said.

The center would not use the entire building. It would occupy about 850 square feet, mainly near the front porch area of the building. The building currently is being used for storage.

He said the center would not offer any programming for the homeless but would serve as a clearinghouse for information about programs available in the community. It also would not have a meal program, other than coffee and donated snacks and other such items.

A longtime debate that surrounded the site when it last served as a homeless center was the issue of alcohol and the homeless. Henderson said the drop-in center’s policy would be that people can’t drink at the center, but they won’t be turned away for being drunk.

“They can be drunk, if they come in and behave,” Henderson said. “People who are drinking can still freeze to death.”

The Lawrence Community Shelter grew out of a small drop-in center similar to the one being proposed. But Henderson said now that the community has a modern homeless shelter, he doesn’t see a scenario where this drop-in center will need to morph into something more ambitious.

But he also said it is unrealistic to think the Lawrence Community Shelter is going to serve every homeless individual in the community. He said he’s not aware of all the issues that lead to a homeless person not staying at the shelter, which generally is not turning people away because of capacity issues. Rather, Henderson said it is clear to him that a service like this is needed in the downtown area.