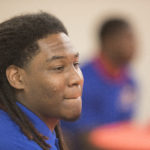 Thursday night, after playing a little basketball with some friends, I stumbled onto a pretty cool moment at Five Guys while grabbing a hard-earned burger on my way home.

While I waited for my food, KU defensive lineman Codey Cole III walked in and approached the counter to place his order.

Well aware that Cole was a Jayhawk and wildly interested in just how big his order might be — after all, Cole, a senior defensive end from Ypsilanti, Mich., stands 6-foot-3 and weighs 275 pounds and probably can eat a lot — I started paying a little closer attention to what Cole was up to.

I’m glad I did, too. In the moments that followed, Cole was approached by not one but two different people about his status as a member of the KU football team.

The first, an older gentleman in a blue KU polo, asked him if he played for the team, shook his hand and told him what a big fan he had always been.

The second, a young kid who must have been 9 or 10 years old, also walked up to Cole near the beverage machine and started telling him that he played football, too.

Cole ate it up. He asked the kid how he did, what position he played and if his team was any good. It was clear that the moment was a little full circle for Cole, who no doubt grew up looking up to older athletes when he was young.

So there, in a small restaurant on the south side of Lawrence, not two minutes apart, two Kansas fans separated by roughly 50 years in age made it a point to say hello to Cole and wish him well.

It might have been just two fans, but the fact that they were from such different walks of life seemed to be a strong indication of the appetite for successful football in Lawrence. We saw it during the Mark Mangino years, and there’s little doubt that Jayhawk fans are clamoring for it again. With the team off to a 1-0 start and Les Miles bringing new buzz to the program, it’s evident that people are more hopeful about the future of the program today than they have been in recent years.

That includes Cole, but you didn’t have to ask him or even talk to him to understand that. Maybe it’s a product of the new coaching staff or the 1-0 record and the hope for the team’s first better season in a long time. But whatever it is, the second-string defensive lineman who recorded one tackle in KU’s season opener carried himself with pride on Thursday night and seemed genuinely proud to claim his status as a KU football player.

On his way out, the older gentleman stopped and talked to Cole one more time.

“Good luck on Saturday,” the man said. “But not just Saturday, the whole season.”

“Thanks,” Cole said with a smile. “Really appreciate the support.”

So did the man.

Maybe this time really can be different — for everyone.