Self on NCAA’s willingness to explore compensation for athletes: ‘It has to be addressed’ 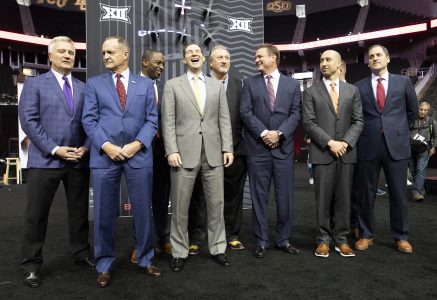 Kansas head coach Bill Self and other Big 12 coaches assemble for a group photos during Big 12 Media Day on Wednesday, Oct. 23, 2019 at Sprint Center in Kansas City.

Kansas basketball coach Bill Self believes that Tuesday’s announcement from the NCAA on further plans to explore allowing student-athletes to profit from their name, image and likeness is a positive sign for the future of college athletics.

“I think it’s a great first step,” Self reiterated from his earlier stance during his “Hawk Talk” radio show Tuesday night. “It has to be addressed. I mean, the way it’s worked over time isn’t going to continue to work.”

Although Tuesday’s news was considered by many to be a landmark moment, one in which the NCAA is declaring that it is open to creating a more modern version of its rules, any actual change remains in the distance.

As he said a few weeks ago, Self explained Tuesday that consistency was his biggest hope for any change that’s to come.

“Whatever happens, let’s just make sure it’s an NCAA rule that’s uniform as opposed to a state by state rule,” Self said.

The issue, which was brought into the legal realm by former UCLA star Ed O’Bannon, who has fought for athletes’ rights specifically as they pertain to using a likeness and image in popular sports video games created by EA Sports, has been in an ongoing battle for more than a decade.

O’Bannon’s lawsuit against the NCAA, which he filed on behalf of all NCAA Division I football and men’s basketball players in July of 2009, argues that, upon graduation, former student-athletes should be entitled to financial compensation from the NCAA’s commercial use of their image and likeness.

The NCAA, however, has said that providing that type of compensation would run in contrast to their core values that define amateurism.

Self said Tuesday that he recently talked with someone about the origin of the O’Bannon case and his understanding was that the intent for how college athletes could be paid was a key part of the discussion.

“I don’t think that back then the intent was or the thought was that kids could just go make as much money from boosters as they possibly can and then move on down the road,” Self said. “I think the intent, at least initially, was when entities, corporations benefit from the kids then those kids deserve to get a portion of what that is.”

Self also said careful consideration has to be given to what is and is not allowed, with so many companies, conferences and other money-making entities potentially tapping into this style of marketing.

“The whole thing would be that (companies, etc.) can do that to enhance their own product and the kids can make (money) off of that,” Self said. “And I’m not saying that’s good, bad or indifferent. I’m just saying that could create a pretty wild situation. … The way it was kind of written in California, I don’t know if that’s going to be the end game on what they settle on, but it’s great that it’s at the forefront of everyone’s mind in determining the future of the NCAA, that this needs to be discussed and hashed out and hopefully something can be developed in the foreseeable future, which I do believe that will occur.”

Most years, exhibition games mean very little and it’s difficult to learn too much from them before, during and after.

This year, however, things are different.

With the third-ranked Kansas men’s basketball team staring down a showdown with No. 4 Duke in less than a week, Thursday night’s exhibition finale against Pittsburg State at Allen Fieldhouse will have more meaning than most tuneups before it.

For starters, it will mark the first and only opportunity sophomore point guard Devon Dotson will get to run this year’s team in a true game-like setting.

Beyond that, there’s still some uncertainty at the four-spot — both in terms of who should play it and how much KU wants to play two bigs at the same time — and the Jayhawks likely still will be without senior grad transfer Isaiah Moss, who remains sidelined with a hamstring injury.

While some of those things sound like extreme challenges, KU coach Bill Self is actually viewing them from the positive side of the coin.

“I actually think we’ve done OK,” Self said Wednesday night on “Hawk Talk.” “I don’t think we’ve done great, but I think we’ve done pretty well. I don’t think it was really evident in our first exhibition game because we had a frustrated center, we had an injured point guard and then we had our best shooter that didn’t participate. So it wasn’t really our real team as far as what we hope it (will) look like. But I thought we did fine.”

With that 30-point win over Fort Hays State being the foundation, Self is looking forward to seeing more during Thursday’s exhibition finale against Pitt State — more from the Jayhawks and more from the opponent.

“I think (Pitt State coach) Kim (Anderson) will probably do more things,” said Self of the former Missouri player and coach now in his third season in charge of the Gorillas. “I think they’ll probably play some zone and do some things that’ll be good for us because we anticipate Duke doing that, as well. It’ll be good. I think there’s a lot of things we have to get in for preparation against Duke because we watched their first exhibition and, much like ours, they didn’t show much. So we were looking back at the last three times we played them and different ways to attack if they try to do some similar things as in the past.”

Although Anderson’s squad will not be able to replicate the type of talent and athleticism that the Blue Devils will throw at KU on Tuesday, Self said that getting a feel for what to do against a zone, should Duke play one, or in the final couple of minutes of both halves, could be big for the Jayhawks heading into the season opener.

“I think Coach K has been doing this a while and I’ve watched his teams play for a while,” Self said. “I don’t think they’re going to just pull something randomly out of the air, just like we will not. But still yet I think it’d be nice to have a few tendencies to kind of try to play to to give your team the best chance to look good.”

With the 117th edition of the KU-K-State football version of the Sunflower Showdown on tap for 2:30 p.m. Saturday at David Booth Kansas Memorial Stadium, Self opened “Hawk Talk” on Wednesday night by getting in on the action.

“Shouldn’t we be talking about football,” Self opined. “It’s a huge week and congrats to all the guys in the program for just an incredible win Saturday and hopefully more to come this Saturday.”

Les Miles’ Jayhawks, of course, are coming off of a 37-34 win over Texas Tech that followed a 50-48, close-call loss at Texas the week before.

That moved the Jayhawks to 3-5 on the season, 1-4 in Big 12 play, and set up one of the most anticipated football clashes with K-State in years.

“Oct. 29 is too early to be talking about hoops it seems like,” Self said.

Although no final decision has been made, it’s sure looking more and more like KU senior Mitch Lightfoot is going to redshirt.

Self talked at length on Tuesday night about Lightfoot’s situation, explaining that his appreciation for the 6-foot-8 forward from Gilbert, Ariz., has caused him to look at this redshirt situation a little differently than most.

“He’s actually played really well and would deserve an opportunity to play minutes, there’s no question,” Self said of Lightfoot, who is pegged as the fourth big man in a crowded KU front court. “… If we were just trying to have the best team and prepare for the worst, if somebody got hurt or something this season, then we’d play Mitch. But Mitch is going to graduate at Christmas and he can complete his Masters in three semesters if he were able to stay in school.”

Self continued: “I’m not saying this would happen, but I love having him around so much that I think he deserves an opportunity to have a chance to start. And his best opportunity would be next year. Not saying it will happen, but it would be next year, when probably some of these guys are no longer around. … I do think he’s improving at a rate that I think he will really be a good player whenever we decide to end his eligibility, and, as of right now, we’re thinking the best option would probably be to redshirt him.”