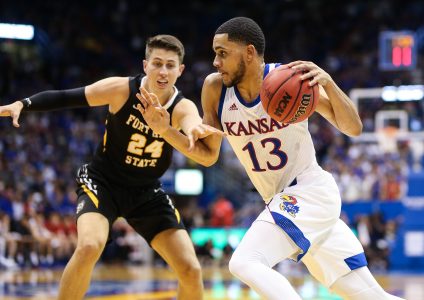 It was just an exhibition game and it probably will not even rank in the top 100 memories that KU’s freshman trio will have by the time their careers are finished, but the unofficial debut of Christian Braun, Tristan Enaruna and Jalen Wilson offered a few memorable moments.

Playing a combined 68 minutes in KU’s 86-56 win over visiting Fort Hays State, all three newcomers made multiple shots, grabbed a handful of rebounds and limited their turnovers in their first game in front of the Allen Fieldhouse crowd.

“I thought our freshmen did fine,” KU coach Bill Self said after the victory.

With veterans Devon Dotson (right ankle sprain) and Isaiah Moss (hamstring) in street clothes, it was Wilson who earned the right to start Thursday’s contest.

Right away, the 6-foot-5 wing from Denton, Texas, made his presence felt, burying a 3-pointer from the top of the key to open the scoring.

“Jalen, I would describe him as different so you didn’t really need to say much,” sophomore Ochai Agbaji joked when asked if he offered any advice to the rookie starter. “He was already hype for it. He was excited and at the same time he was confident, too, and that’s something I respect about him.”

Asked if Wilson did anything to separate himself from the others to earn the starting nod, Self said simply and matter-of-factly, “Absolutely not. Not one thing.”

While it was Wilson – 6 points on 2-of-9 shooting, three rebounds, two assists and one turnover in 24 minutes — who drew the starting assignment to open the game, Braun earned that distinction to open the second half.

While playing some backup point guard and taking turns at the 2 and on the wing, Braun finished 3-of-8 from the floor for 8 points, three rebounds and three assists in 24 minutes.

Enaruna, who tallied 6 points and five rebounds on 2-of-9 shooting in 20 minutes, also added a block and a steal.

Self said those last two numbers easily could have been higher for the 6-8 forward from the Netherlands.

“Tristan, he’s so long,” Self began. “If he could just amp it up another gear he could really be effective defensively in keeping balls alive. But he’s just kind of got that pace that doesn’t allow him to get there. But he will.”

The best news for Kansas, at least right now, is that as long as the rest of the KU roster is healthy, none of them will need to get to top speed too quickly. If they do, it’ll merely be a luxury.

“None of the freshmen will start, at least initially,” Self said. “I’m not saying that can’t change, but when we line up to play in (Madison Square) Garden (against Duke on Nov. 5), none of those guys will start, and I wouldn’t think Isaiah would either. It’d be hard to take Marcus Garrett off the floor. They’ll all have roles and be part of a rotation, but I would think with the freshmen, at least early on, it’ll be whoever’s performing the best those particular nights that’ll get the most minutes.”