Azubuike’s career exhibition numbers not as bad as Bill Self remembers, but the KU big man is clearly built for prime time 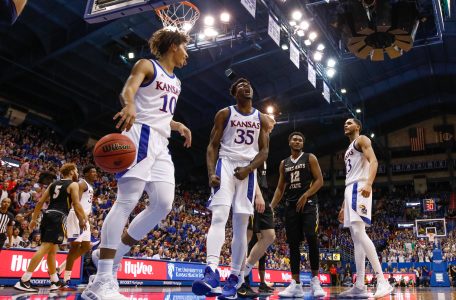 Kansas center Udoka Azubuike (35) roars after muscling his way in for a bucket and a foul during the second half, Thursday, Oct. 24, 2019 at Allen Fieldhouse.

Thursday night after his senior center tallied 5 points and eight rebounds in 17 uninspiring minutes during KU’s 86-56, exhibition victory over Fort Hays State at Allen Fieldhouse, Kansas coach Bill Self said you could go back and look at exhibition games from the past and see that Udoka Azubuike is not a huge fan of the preseason.

And although some of the production from the exhibition games in Azubuike’s past backed Self’s claim, I found much better overall numbers than I expected.

In nine career exhibition game appearances prior to Thursday night, including two in Italy during the summer of 2017 and the Showdown for Relief against Mizzou that same fall, Azubuike has produced averages of 13 points and five rebounds per exhibition game in 19 minutes of play.

Those numbers compare favorably to his career regular season averages of 11.5 points and 6.4 rebounds in 21 minutes per game.

There’s more. To get to those numbers, Azubuike made 48 of 63 field goal attempts (76%) and also blocked a dozen shot attempts by the overmatched opponents.

Sure, you’d like your preseason Big 12 Player of the Year to do better than 5 points and eight rebounds against a Division II team. But projected out over 25-30 minutes instead of just 17, Thursday’s line wasn’t actually that bad.

The mere look of him taking just two shots (he made both) is troubling, but Fort Hays State deserves credit for that.

Rather than letting Azubuike bully his way to a bunch of easy baskets, the Tigers swarmed him every time he even thought about catching the ball and gave him no room to work. Azubuike probably could have forced the issue a little more, but doing so would’ve led to more offensive fouls and turnovers not necessarily more points.

One thing I really liked about Azubuike’s game on Thursday night was the fact that he never stopped working. He clearly was frustrated by the FHSU defensive game plan and probably didn’t have a ton of fun, but he kept battling for position, asking for the ball and trying to play within the flow of what Kansas wants its offense to look like.

That’s maturity. That’s perseverance. That’s what you want to see, regardless of what the final stat sheet says.

When the regular season rolls around, more than a few KU opponents are likely to play Kansas and Azubuike the way Fort Hays State did on Thursday night. But quite a few won’t, too.

Those that don’t will see why Azubuike was picked as the Big 12’s best this preseason. His hands and feet are so good the closer he gets to the rim, and there comes a point during any given possession when opposing defenses have to choose to duck and cover instead of trying to stand tall.

That’s how the KU senior has tallied 643 career points on 74% shooting to date, and that’s why there’s nothing to worry about after watching Azubuike’s limited production on Thursday night.

He might not have the paltry numbers that Self hinted at on his exhibition game log, but there’s no denying that Azubuike has more energy and intensity and more of a take-no-prisoners mindset when the games count for real.

Thank goodness this isn’t the NFL, where you’d have to wait through four preseason games to get to the ones that matter.

Azubuike will be there guns blazing when the Jayhawks line up against Duke on Nov. 5 to tipoff the season at the Champions Classic in New York City. And as soon as that ball is tossed into the air for the opening tip, no one will ever think about Azubuike’s exhibition stats — good or bad — again.