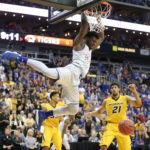 Kansas center Udoka Azubuike (35) finishes a lob dunk before Missouri forward Jordan Barnett (21) during the first half of the Showdown for Relief exhibition, Sunday, Oct. 22, 2017 at Sprint Center in Kansas City, Missouri.

With so many games automatically placed on the schedule through early season tournaments and conference challenges, putting together an exciting home slate has become tougher for the Kansas men’s basketball program in recent years.

That fact, among others, inspired the creation of a new six-game series with longtime rival Missouri, KU coach Bill Self told the Journal-World late Monday night, shortly after the multiyear series was announced.

“We’ve actually talked about this for months now,” Self told the Journal-World. “It’s been brought up in our head coaching meetings and with the administration. I wasn’t 100% on board but I wasn’t against it.”

With just 13 nonconference games on KU’s schedule every season and so many of those matchups set by people outside of the KU athletic department, Kansas has a limited number of opportunities to fill its home slate with big-name teams.

That challenge becomes even greater when you consider that other conferences are going to 20-game conference schedules (instead of the 18 played in the Big 12), therein limiting the opportunities potential KU opponents have to schedule marquee games in the nonconference, as well.

Take this season, for instance.

KU plays two games as part of previously scheduled home-and-home agreements — versus Colorado and at Stanford.

After that, it’s three games in the Maui Invitational, the Duke game in the Champions Classic in New York, the Tennessee game in the Big 12-SEC Challenge at Allen Fieldhouse and at Villanova as part of the Big 12-Big East showdown, plus the UMKC game at Sprint Center which is another one of KU’s annual obligations.

That’s nine of the 13 right there, leaving home games against UNC-Greensboro, Monmouth, East Tennessee State and UW-Milwaukee to round out the nonconference portion of the schedule.

Adding Missouri to the home slate on a semiregular basis and playing the Tigers at Sprint Center in the future instead of teams like Colorado State, Davidson and UMKC, automatically puts a headliner-type game on the schedule every year.

“To know that we could lock this one in I believe is a positive for our scheduling every year moving forward,” Self told the Journal-World. “Regardless of how you feel, that week of that particular game, fans at both schools will be juiced to be at this one. Whether you agree or disagree, you’re going to want to be in attendance.”

Strongly against renewing the rivalry with Missouri for the past seven years after MU left the Big 12 Conference for the SEC, Self said the changes in scheduling helped soften his stance.

“The thing about it is Missouri made the decision to do what they did when they left the league, which they had every right to do,” he said. “And we made the decision when they left the league to also do what was best for us. Now, because of the way the scheduling breaks for us, compared to in the past, it’s the perfect opportunity to renew (the rivalry) and I believe it’ll be very good for Kansas over time. We didn’t do this to help Missouri. We did this because it helps us.”

Self also said the response to the 2017 “Showdown for Relief” charity exhibition game at Sprint Center played a huge role in changing his opinion about playing the Tigers.

“That much interest in a game that didn’t even count,” he marveled of the contest that sold out Sprint Center and raised nearly $2 million for hurricane relief. “Those are the kind of games coaches love to coach in and certainly players love to play in. And I do think this adds to the energy of our schedule each and every year.”

Self is far from the only Jayhawk who feels that way.

The Journal-World on Monday night reached out to nearly a dozen former Jayhawks to gauge their reaction on the renewal of the series. Those who responded were overwhelmingly in favor of seeing KU and MU back on each other’s schedules.

“Definitely glad it’s back,” said former KU guard and staff member Brett Ballard, who now is the head coach at Washburn University. “This was one of the best and most natural rivalries in college basketball and I believe that every KU player should get to experience the intensity, passion and electric atmosphere of the Border War.”

“I like that it gives KU fans two more big time games in Allen Fieldhouse, too,” he said. “With Mizzou gone and these Champions Classic-type games being neutral-site games, the KU fans haven’t had as many high-level, must-see games in recent years. Some will argue that KU does not have as much to gain, but I think there are far more positives than negatives. Plus, we’ve proven over time who by far has the superior program.”

“I’m really excited that the series is back,” Reed said. “I know the rivalry, in terms of history, is a huge deal and is up there with the likes of UNC-Duke. And hitting a big shot and getting a win against Mizzou was always a bit more satisfying.”

Added Teahan: “Happy to hear it’s back. Such a great rivalry.”

Elijah Johnson, who, like Teahan, was on the floor for the last regular season game between KU and Missouri in 2012 — an epic, overtime thriller won by Kansas — told the Journal-World that the news of the return of the rivalry immediately made him smile.

“Sophomore year at Missouri and, obviously, my junior year against them in the Fieldhouse were my best memories against MU,” Johnson said. “Those were significant times for me and my career at KU and also some of the best basketball I played in a Kansas jersey. To see this reborn is great. It was much needed. And my appreciation goes out to whoever signed the contracts. ”

Former KU forward Kevin Young, who played 28 minutes in that 2012 KU-MU finale, which proved to be his only taste of the Border Showdown, also was overjoyed about the news.

“That’s awesome,” Young told the Journal-World. “I’m glad it’s back. Even though I only played on year, I thought it was incredible. The passion for the game and energy going into that one made me a lot better player.”

Just an hour into a KUsports.com Twitter poll that asked if KU fans were in favor of the renewal of the KU-MU series or against it, 66% of the more than 1,000 votes said they liked it.

While the reaction on Twitter and among the two fan bases was mixed on Monday night — a healthy dose of trash talk between the two also returned — few responses jumped out quite like the one from Lisa Braun, the mother of KU freshman Christian Braun, who is a former Mizzou player herself and also has another son, Parker, currently on the Tigers’ roster.

Lisa Braun then went on to engage with a few fans and responded to media tweets with her own thoughts about why the return of the rivalry is such great news.

“This game has been missed by all b-ball fans,” she added before responding to a tweet from a pro-Missouri Twitter account that referenced her knowing who to root for next December.

“I know what’s ingrained in me,” she wrote. “It’s gonna be hard to stay neutral.”